An inventor has spent three years creating a human carwash, complete with rotating brush and emergency stop button – and has released a video showing how it works.

Matti Paaso, 70, from Helsinki, Finland went through four prototypes to create the £4,100 machine which he claims will help those in hospital and with mobility issues.

It is built with two motors which rotate the brush and move it up and down during the shower – similar to the brushes in a real car wash. 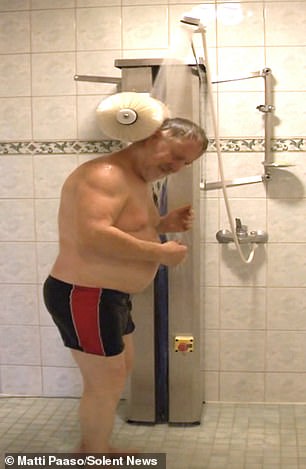 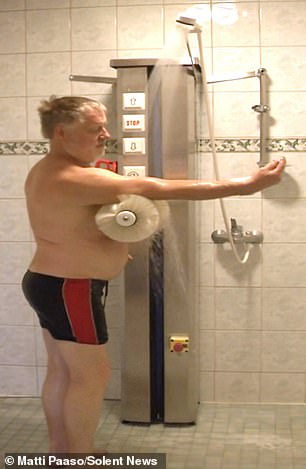 Matti Paaso (left and right demonstrating the machine), 70, from Helsinki, Finland went through four prototypes to create the £4,100 machine which he claims will help those in hospital and with mobility issues

Mr Paaso said: ‘I couldn’t find anything like this when I was doing my research on YouTube.

‘It is fitted with two motors which control the rotating brush and the vertical movement of the brush.

‘It also has an emergency stop button and automatically stops after 15 minutes.’

He continues: ‘I designed it for people who have mobility issues, or are injured or are older and struggle to shower themselves.’

Mr Paaso hopes the unique shower instalment, which means users don’t need to scrub with their hands, will fill a gap in the market. 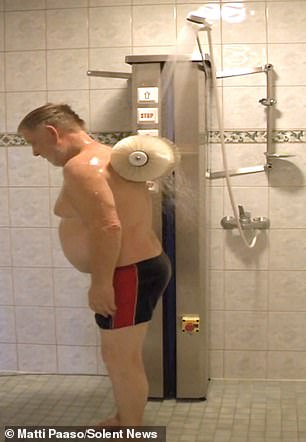 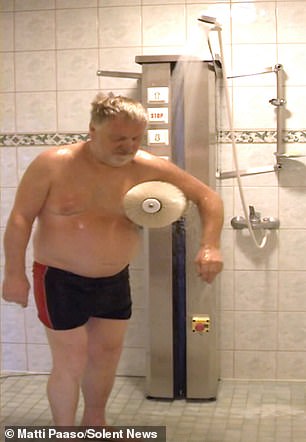 The machine (left and right demonstrated by Mr Paaso) also has an emergency stop button (bottom right in each picture). He claims installation is very straightforward, with the machine simply having to be mounted next to a shower

He said: ‘It could be a very useful tool in a hospital or for care providers, it only uses the same amount of space as a normal shower.

‘The user can wash their entire body in two or three minutes, but as the brushes are designed for a gentle massage the normal washing time is about 10 minutes.

‘One of the prototypes was trialled in a hospital for one month and they loved it.’

To operate the Humanwash, users must press the foot pedals or buttons installed on the side of the device.

He claims installation is very straightforward, with the machine simply having to be mounted next to a shower.