Iran executes former child bride for ‘killing abusive husband’: Sentence is carried out two days after she gave birth to stillborn child fathered by prisoner she married while on death row

Iran executed a former child bride for ‘killing her abusive husband’ two days after she gave birth to a stillborn baby fathered by a prisoner she married while on death row.

Zeinab Sekaanvand was just 15 when she was forced to marry her abusive husband and at 17 she was jailed for his murder in 2012 after she confessed under torture.

The 24-year-old could not be executed while she was pregnant, but as soon as the baby was delivered Iranian authorities could carry out the death sentence.

And on Tuesday, two days after her child was delivered stillborn, she was put to death at the Euromieh central prison, in the city of Urmiya in northern Iran. 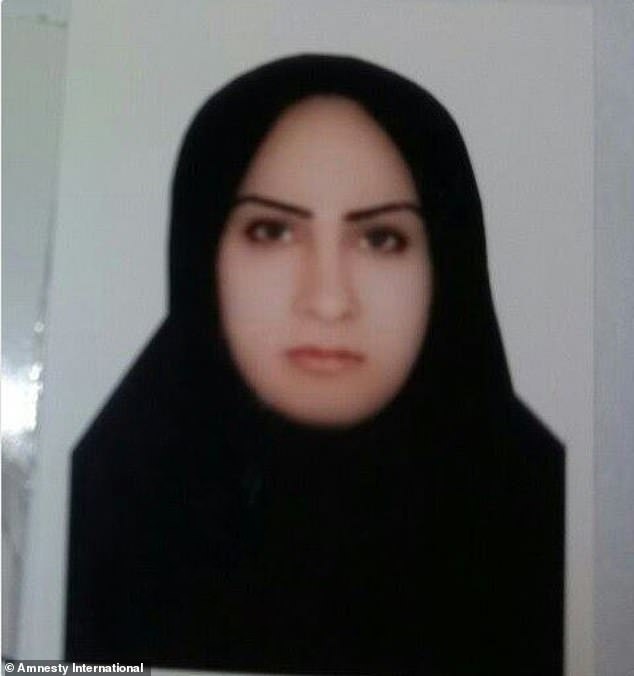 The day before her execution Amnesty International warned Iran not to carry out the death sentence because ‘she was subjected to a grossly unfair legal process’.

Announcing her death, Amnesty tweeted today: ’24-year-old Zeinab was executed in Iran this morning. She was a child when arrested & convicted after an unfair trial. She said male police officers tortured her in detention. We’ll issue a response soon. Pls RT & tell to stop sentencing children to death!’

After the murder of her husband she was detained in a police station for 20 days where she was beaten by male police officers and ‘confessed’ to stabbing her spouse.

He was said to have abused her physically and verbally for months and rejected her requests for a divorce, according to reports from Amnesty International.

During her trial the court discounted Zeinab’s claims that her husband frequently beat and abused her, a source told Human Rights Watch.

Amnesty International found Zeinab’s trial was ‘unfair’ as it did not comply with the Iranian penal code, she did not get access to lawyers, and did not provide a legitimate report that evaluates ‘her mental growth and maturity’.

The Iranian courts did not give her a retrial her after she turned 18, nor did they tell her she could apply for a retrial as part of a change in the law in 2013 which meant prisoners who commit crimes when they were children could have their hearing held again.

Philip Luther, Middle East and North Africa Research and Advocacy Director at Amnesty International, last week called on the Iranian authorities to stop the execution, which he said was a result of an ‘unfair trial’. 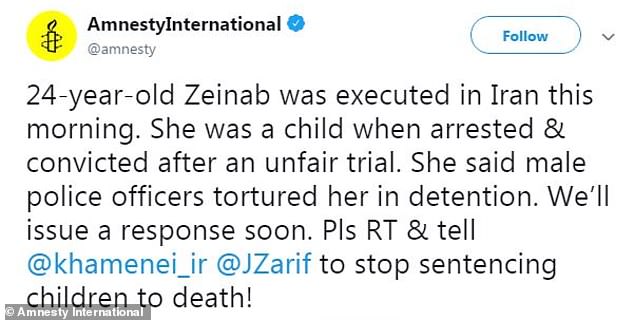 He said before her death: ‘The Iranian authorities must urgently halt their plans to execute Zeinab Sekaanvand. She was arrested when she was just 17 years old and sentenced to death for the murder of her husband, whom she married at the age of 15. Not only was she a child at the time of the crime, she was subjected to a grossly unfair legal process.

‘She did not see a lawyer until her final trial session in 2014, when she retracted ‘confessions’ she had made when she had no access to legal representation. She also says that, following her arrest, she was tortured by male police officers through beatings all over her body.

‘The authorities must immediately quash Zeinab Sekaanvand’s conviction and grant her a fair retrial without recourse to the death penalty, and in accordance with principles of juvenile justice.’

According to religious law and based on a notion of when children reach puberty, Iran considers girls as young as nine criminally liable and boys at the age of 15.

But as a signatory to the Convention on the Rights of the Child, Iran is obligated to outlaw the use of the death penalty on under 18s at the time they committed a capital offence.

Bri, child, executes, former, Iran
You may also like: