Iranian leader Hassan Rouhani is facing a fresh battle to stay in power after his economy minister was impeached yesterday, as critics said the president himself should be next.

Rouhani has come under fire from all sides since Donald Trump withdrew from the West’s nuclear deal with Tehran, battering Iran’s economy with fresh sanctions.

Lawmakers have summoned Rouhani to parliament to face questions over the collapsing value of Iran’s currency, the country’s stubbornly high unemployment and claims of corruption.

They have already impeached his labour and economy ministers this month and Rouhani’s rivals are threatening to remove the president himself. 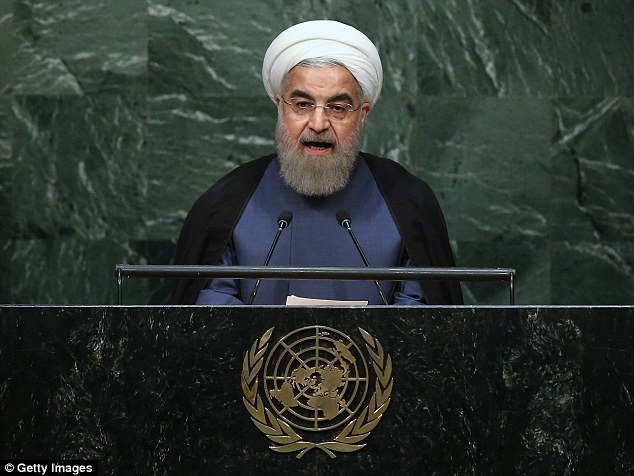 Hassan Rouhani (pictured) has come under fire from all sides since Donald Trump withdrew from the West’s nuclear deal with Tehran, battering Iran’s economy with fresh sanctions

Iran has full control of the Gulf and the U.S. Navy does not belong there, the head of the navy of Iran’s Revolutionary Guards has said.

Tehran has suggested it could take military action in the Gulf to block other countries’ oil exports in retaliation for U.S. sanctions intended to halt its sales of crude.

Washington maintains a fleet in the Gulf that protects oil shipping routes.

General Alireza Tangsiri said: ‘We can ensure the security of the Persian Gulf and there is no need for the presence of aliens like the U.S. and the countries whose home is not in here.

‘All the carriers and military and non-military ships will be controlled and there is full supervision over the Persian Gulf. Our presence in the region is physical and constant and night and day.’

Separately, the head of the Revolutionary Guards, Major General Mohammad Ali Jafari, said Iran’s enemies would not prevail in a conflict.

‘The enemies are strictly avoiding any conflict with Iran because they know that it will not be beneficial for them,’ Jafari said, according to Tasnim.

Yesterday Elias Hazrati, of the reformist Hope faction in parliament, said the president should have been impeached but economy minister Masoud Karbasian was ‘the only person we could get our hands on’.

However Rouhani is protected by the fact that Iran’s supreme leader Ayatollah Ali Khamenei said he should see out his term to 2021, despite his own harsh criticisms of the president’s policies.

Many hardliners who opposed Rouhani’s negotiations with the West have felt vindicated by the unravelling of the nuclear deal.

They have led the charge against Rouhani’s cabinet, and were on Monday seeking enough votes for impeachment proceedings against his industry and transportation ministers.

Rouhani has also lost support among reformists who were key to his election victories in 2013 and 2017, after the movement was suppressed in the wake of mass protests in 2009.

The president has failed to deliver on his promises of easing civil liberties, particularly his vow to release political prisoners and reduce censorship.

Hazrati said yesterday: ‘What have we done with this nation? We made them miserable and wretched.’

Rouhani won two emphatic victories with pledges to rebuild Iran’s foreign standing and attract investment, but the nuclear deal – they key part of that strategy – now lies in ruins.

Many wealthier Iranians are trying to leave, while poorer areas have seen regular, low-level strikes and protests that have occasionally turned violent.

The prices of essential goods are rising rapidly, and worse pain is to come when US sanctions on Iran’s vital oil sector return in November.

There had been talk of Rouhani as a possible successor to the ageing Khamenei.

But he looks increasingly likely to follow the path of his two predecessors in the presidency, Mohammad Khatami and Mahmoud Ahmadinejad, who have been effectively silenced by the establishment. 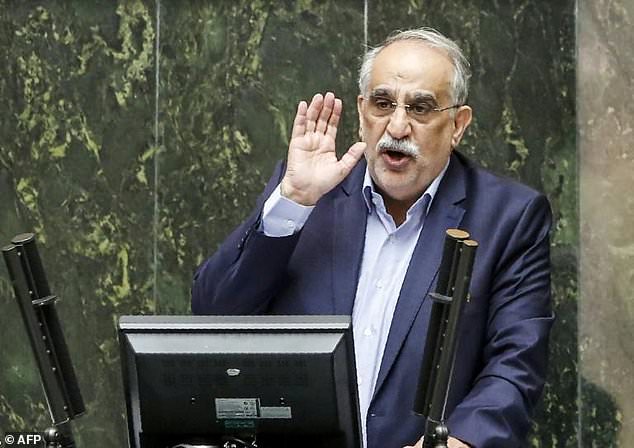 Clement Therme, Iran research fellow for the International Institute for Strategic Studies, said: ‘No one believes Rouhani will reform anything anymore.

‘He was just a tool for the system, appearing to address people’s demands for change without really changing anything.

‘But he thinks that if Rouhani delivers on his policies, it will mean the end of the system,’ particularly by opening the country to Western cultural ‘invasion’.

Iranian lawyers have asked the International Court of Justice to order the United States to lift sanctions imposed by the Trump administration against Tehran, but Washington described the suit as meritless.

At the start of a week of hearings in The Hague, the court’s president asked the United States to respect the outcome of the case that Iran filed in July.

During their decades of animosity, both countries have ignored rulings at the court.

Tehran’s suit says the U.S. sanctions, which are damaging the already weak Iranian economy, violate terms of a little-known friendship treaty between the two countries.

‘The U.S. is publicly propagating a policy intended to damage as severely as possible Iran’s economy and Iranian national companies, and therefore inevitably Iranian nationals,’ said Mohsen Mohebi, representing Iran. ‘This policy is plainly in violation of the 1955 Treaty of Amity.’ 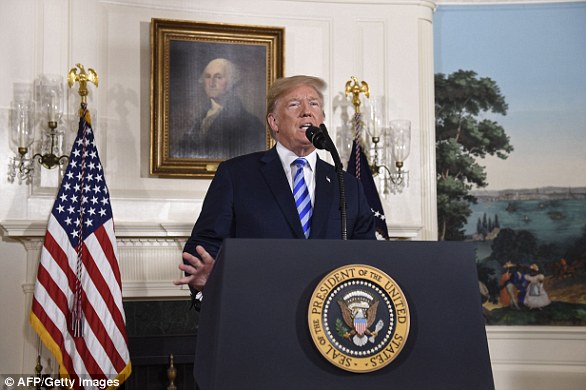 President Donald Trump announces the U.S. withdrawal from the nuclear deal in May

U.S. Secretary of State Mike Pompeo described Iran’s suit as ‘an attempt to interfere with the sovereign rights of the United States to take lawful actions, including re-imposition of sanctions, which are necessary to protect our national security’.

‘We will vigorously defend against Iran’s meritless claims this week in The Hague,’ he said in a statement.

A ruling is expected within a month, though no date has been set.

Although Washington’s European allies protested against Trump’s withdrawal, most Western companies intend to adhere to the sanctions, preferring to lose business in Iran than be punished by the United States or barred from doing business there.

The United States and Iran have clashed at the court in the past since they became enemies after Iran’s 1979 Islamic Revolution.

Iran ignored a 1980 U.S. suit at the ICJ over the seizure of American diplomats in Tehran, which the court found to be illegal.

In another suit and countersuit, the ICJ found that the 1955 treaty was still valid even though it was signed before the revolution. However, the court found in 2003 that neither actions by the United States against Iranian oil platforms nor Iranian attacks on American shipping violated the treaty.

Hassan, Irans, leader, Rouhani, su
You may also like: