The founder of a hardline Islamic lobbying group accused of making derogatory remarks about Jews and spreading conspiracy theories was invited to speak to civil servants, it has emerged.

Sufyan Ismail, 45, is the founder of Muslim Engagement and Development (MEND),  an NGO that aims to encourage British Muslim communities to be more involved in British media and politics.

It has been revealed that Mr Ismail, a former businessman, was invited to speak in an online event organised by the Civil Service Muslim Network on the topics of Islamophobia and racism. 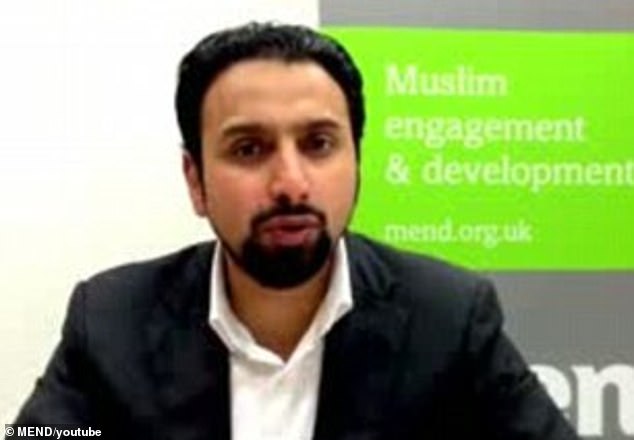 Sufyan Ismail, 45, the founder of Muslim Engagement and Development (MEND), was invited to speak at an event for civil servants, it has emerged

The invitation from the cross-government diversity body, discovered by The Times, would have given more credibility to MEND, which was accused in a 2017 report of ‘promoting extremism’.

Sara Khan, the government’s commissioner for countering extremism, said Mr Ismail should not have been invited to speak, calling MEND a divisive organisation where some of whose staff had engaged in hate.

Mr Ismail has previously caused upset when he claimed, after MPs voted to recognise Palestine, that it was ‘the first vote lost by the Israeli lobby in parliament for 300 years’.

As Israel was founded in 1948, it is perceived this was a reference to the alleged power of British Jews in politics. MEND said last night that it and Mr Ismail ‘condemn all forms of antisemitism’.

It is reported that Mr Ismail himself has also funded the terrorism suspects’ advocacy group Cage, where one of its leaders described Mohammed Emwazi, the terrorist known as ‘Jihadi John’, as having been a ‘beautiful young man’. 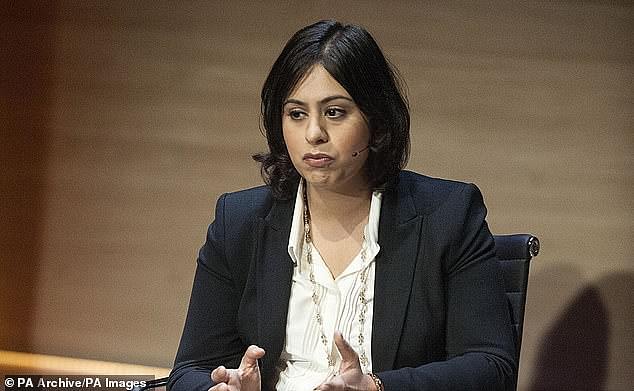 Sara Khan, the government’s commissioner for countering extremism, said Mr Ismail should not have been invited to speak, calling MEND a divisive organisation where some of whose staff had engaged in hate

She added: ‘In 2018 it emerged Mr Ismail has been funding Cage. In our report, we have evidenced how Cage have supported convicted terrorists, and have also published or invited al-Qaeda ideologues to speak at its events.’

MEND has previously stated that Mr Ismail donated to Cage in a personal capacity to support the progressive work it undertook in particular sectors. Mr Ismail’s spokeswoman said: ‘He does not fund Cage.’

Earlier this month MEND was criticised for attacking Jay Singh-Sohal, the Conservative candidate for West Midlands police and crime commissioner, who accused the organisation of ‘seeking to undermine counter-radicalisation’.

In a post that stoked tensions, MEND claimed Mr Singh-Sohal was ‘attacking Muslim organisations’ and ‘furthering Islamophobic tropes’, alongside a photo of him wearing a turban to denote his Sikh faith.

Mr Singh-Sohal, an anti-hate crime campaigner, said readers ‘would just see a turban-wearing Sikh being accused of attacking Muslims. It’s a provocation to incite a community against another person of a diverse faith.’

Mr Singh-Sohal did not make mention of religion in his remarks.

Mr Ismail was set to appear at the Civil Service seminar scheduled for this Thursday to mark Islamophobia Awareness Month, and had been billed to speak on ‘the global increase of Islamophobia’.

However the government have since confirmed that the speech by Mr Ismail has been scrapped.

‘MEND are a divisive organisation. While they claim to counter anti-Muslim hatred, staff members have themselves engaged in hatred against Muslims as our report Challenging Hateful Extremism evidenced.

‘Sufyan Ismail, founder of MEND, has made disparaging comments about Tell Mama, an organisation who do vital work supporting victims and countering anti Muslim hatred.

‘In 2018 it emerged Ismail has been funding CAGE. In our report, we have evidenced how CAGE have supported convicted terrorists, and have also published or invited al-Qaeda ideologues to speak at its events.

‘It is the Lead Commissioner’s view that Ismail’s divisive approach to Islamophobia demonstrates his unsuitability as a speaker at this event.’

Mr Ismail stood down as MEND’s chief executive in 2016.