The brutal murder of four Christians in the Indonesian province of Central Sulawesi was inspired by the Islamic State, but not ordered by it, according to one of the world's foremost experts on the terror group.

One of the victims was beheaded in the attack on Friday, while the other three had their throats slit. Seven houses in Lemban Tongoa, in Sigi District, were burnt down.

Police and the military are still hunting for 10 members of the militant group East Indonesia Mujahideen (MIT), which has pledged loyalty to IS in the past. 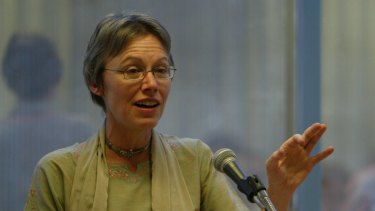 Sidney Jones is a global expert on Islamic terrorism in South-east Asia.Credit:Chris Lane

The director of the Jakarta-based Institute for Policy Analysis of Conflict, Sidney Jones, said the Islamic State's official propaganda channel had claimed the murders as an act in support of the terrorist group.

"ISIS media claimed credit and yes, it was inspired but not directed by ISIS," she said, using an abbreviation for the group.

"This was a sub-group of MIT led by a man named Qatar, who has been involved in attacks with machetes in March and then August this year. This is the first time in a while we have seen the Christian community targeted, usually they go after informants who have been assisting the police, or the police themselves."

Jones said it was not yet clear why Christians had been targeted but the area where it took place, and in the nearby Poso region, has been a terrorist hotspot for some time, and a site of high tensions between the local Christian and Muslim communities.

She said MIT had probably no more than 14 active members and just a handful of guns, which is "one of the reasons they have used machetes" in the latest attack.

"They [MIT] have made a point of moving around the jungle [in the region] in a way that has enabled them to elude pursuers," Jones said.

That and a lack of training in jungle combat for Indonesian city police have held back attempts to bring the group to justice. While the military units had had the relevant training, they did not know the jungle in the area well, which had also slowed down attempts to apprehend the group.

The chairman of the Indonesian Council of Churches, Gomar Gultom, condemned the "barbaric and savage attack" and urged the government to use security agencies to swiftly investigate the murders.

"I had a conversation with the head of Salvation Army this morning and he said the conditions out there are still a little shocking. People still need psychological support," he said. The victims belonged to a church run by the Salvation Army.

"For some time the people out there have been living under the shadow of fear. Therefore, the state must immediately settle this problem and provide security guarantees for the people so that people like farmers can have a normal life again."

However, Gomar argued that — based on currently available information — the attack "did not target Christians. Previous incidents have non-Christians as victims". 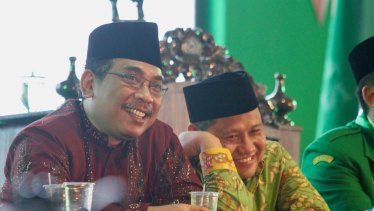 There’s a problem between the groups’: Yahya Cholil Staquf, left.

Yahya Cholil Staquf, the secretary-general of Nahdlatul Ulama, the world's largest Muslim organisation said the murders followed a horrifying pattern of attacks around the world in Paris, Nice, Aleppo, Mosul, Libya and Nigeria.

"Statements such as 'such savagery does not represent Islam' are not enough. Clearly, there is a problem within Islam and there is a problem of relations between groups — be it religious, ethnic, secular ideologies or other identities — amidst the pluralism of the civilised world."

Human Rights Watch Indonesia researcher Andreas Harsono said the attack was "another serious escalation against the Christian minority in Indonesia".