A parked car sits in the darkness outside Peninsula Private Hospital one night in August. It has been five hours and the two passengers have their eyes eagerly trained on the ambulance bay.

With visiting bans or restrictions in place at Victorian hospitals, it is the only way the family of Harma Godfrey can see the 72-year-old. They're hoping to sneak in a quick visit as the terminal cancer patient is transferred from one hospital to another. 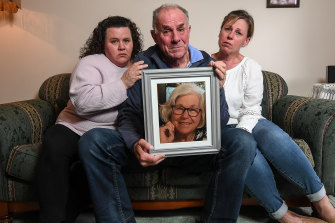 "Don’t get me wrong, I know that Mum thought we were doing everything we could to see her," says Mrs Godfrey’s youngest daughter, Kerry Tolley, recalling that night two months ago. "But part of me couldn’t help but wonder if she thought we’d deserted her."

Mrs Godfrey, who had pancreatic cancer, did not die of COVID-19. However, her family believes she became one of its victims, after going days without being able to see her children or husband during multiple admissions to hospitals in the finals months of her life.

Cancer and palliative care support groups say it is deeply troubling that many Victorian hospitals are enforcing much tougher visiting rules than required by the government, effectively going into lockdown to protect patients against coronavirus.

They say children are prevented from seeing parents who are being treated for terminal cancers, and that there are visitor bans at regional hospitals in areas where there are no active coronavirus cases.

"We are hearing multiple cases from distressed carers who are calling us to say that a family member died alone," said Cancer Council Victoria’s head of strategy and support Danielle Spence, who adds the issue is the most upsetting she has dealt with in her career.

Peter Orchard, chief executive of children’s cancer support group Canteen, said his organisation had been advocating on behalf of children banned from seeing their gravely ill parents in hospital.

They include a 12-year-old unable to see her mother and sole carer while the woman was being treated for cancer in a Victorian hospital. The girl had been at home with her two siblings, with no adult to look after them.

Mr Orchard said visiting restrictions had been getting stricter since March, and he was worried the enormity of depriving children of time with dying parents was lost on decision-makers.

"At this stage we haven’t heard of any relief," he said. "I would have thought with the [COVID-19 case] numbers we have seen fairly consistently over the last two or three weeks, there could be some easing of the severe lockdown hospitals have imposed."

The Health Department’s guidelines allow some compassionate exemptions, including for children aged 15 or younger, to see dying relatives; they are otherwise banned from visiting Victorian hospitals.

"We know this is an incredibly difficult time for patients and their loved ones right now, but we need to do everything we can to keep people safe and save lives," a department spokeswoman said.

As a general rule, adults in hospital are allowed one visitor a day for a maximum of two hours, with a small number of exceptions. But patient groups said these allowances were not always being made.

Mr Orchard said individual hospitals and in some cases individual nurses were making their own decisions about who could and could not visit.

Palliative Care Victoria has joined 12 organisations, including Cancer Council Victoria, in calling for each hospital service to have a contact number through which families can get information and support around visiting restrictions.

In Mrs Godfrey's case, her daughter Ms Tolley and husband Terry were able to see her for just a minute on that August night as she was wheeled out on a stretcher, tiny and frail. 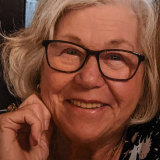 Harma Godfrey died at home on September 11. Her family wanted to avoid sending her to hospital due to visiting restrictions.Credit:Justin McManus

Her closed eyes flicked open at the sound of her husband's voice.

"Oh, there you are," she said, but then she was off. Always eager to put others first, she insisted that they not hold up the ambulance.

In late July, her eldest daughter, Tracy Hoogkamer, had taken her to Frankston Hospital, where she stayed for six days without being allowed visitors. Later, she spent more than three days alone at Peninsula Private, including a stint in the intensive care unit.

No visitors were allowed at Peninsula Private at the height of Victoria’s coronavirus outbreak in August.

Its visiting restrictions are now in line with government guidelines, while Frankston Hospital also permits patients on general wards to have one visitor a day for up to two hours. However, visitors are banned from the intensive care ward in most circumstances.

Mrs Godfrey died on September 11 after the family decided to bring her home so she could be with them, a trend reported widely by palliative care support groups now also experiencing significant strain on their services.

Mrs Hoogkamer had been overseeing her mother’s medical treatment and remains haunted by the thought Mrs Godfrey was cut off from her help while in hospital in her final weeks and months.

The family wants hospitals to change their policies to ensure other terminally ill people can see a support person.

"The least she could have had was the comfort of somebody that she loved being with her," Mrs Hoogkamer said. "I knew she was isolated. I knew she was scared. That’s why it haunts me."

Support for cancer patients and families is available via the Cancer Council hotline: 13 11 20.

haunts, hospital, It, Me, visit
You may also like: