Military police have arrested 31 members of the Italy’s powerful Casamonica mafia in a series of raids across the country today.

Authorities picked up mobsters who have worked for the notorious clan on charges relating to drug trafficking, extortion and loan sharking.

Photos show officers leafing through expensive-looking goods in gaudy properties with gilded and marble furniture. The raids took place in parts of Rome, as well as Reggio Calabria and Cosenza further south in Italy. 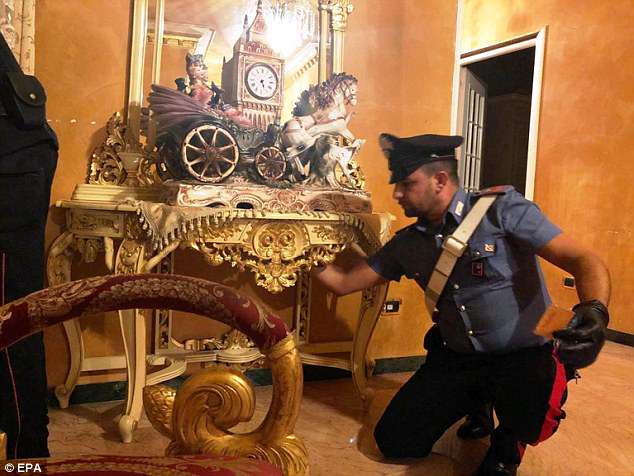 Police rummage through a Casamonica property in a series of raids carried out on the mob unit in parts of Italy including Rome, Reggio Calabria and Cosenza 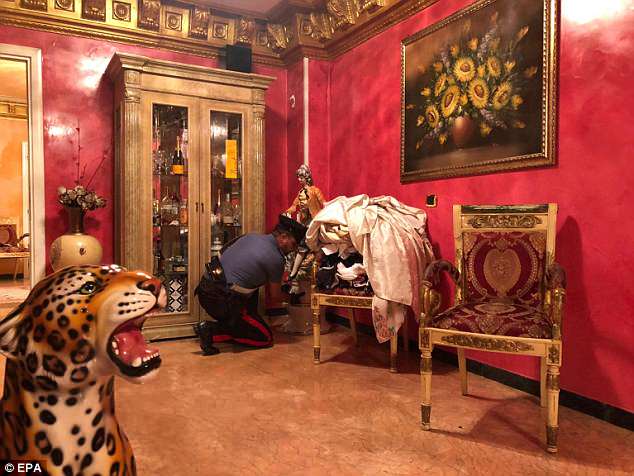 Luxury cars, watches and cash were seized as authorities leafed through the gaudy properties with gilded furniture 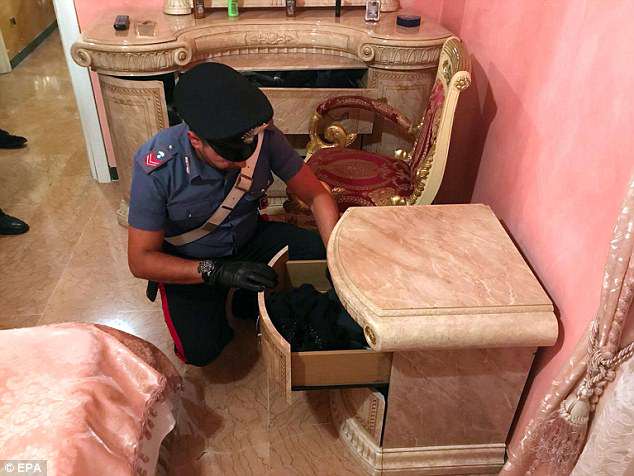 Anti-mafia prosecutor Michele Prestipino said: ‘They didn’t need to use violence, the Casamonica name was enough.’

The Local said Giuseppe Casamonica, who was released after a 10-year prison stint earlier this year, was arrested along with former champion boxer Domenico Spade, whose gym in Rome was also shut down and seized.

Police have issued warrants for six other associates believed to be on the run.

The group’s crimes, which include racketeering, have been carried out with ‘mafia character’ punishable under the Italian penal code.

Most recently, Antonio Casamonica and his cousin Alfredo Di Silvio were wanted in relation to a bar attack which included assault on a young disabled woman. 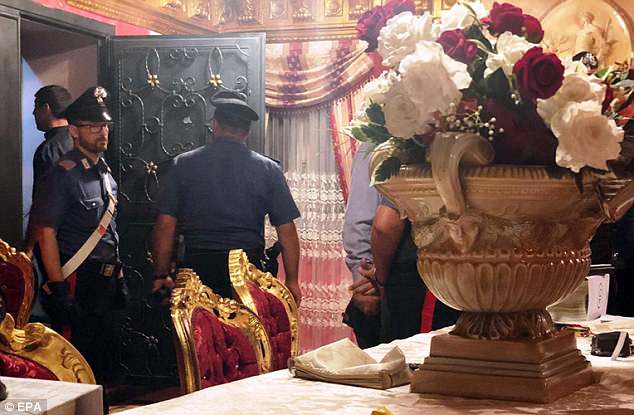 Italian authorities are coming down on the powerful Casamonica network for mafia crimes relating to drug trafficking, extortion and loan sharking 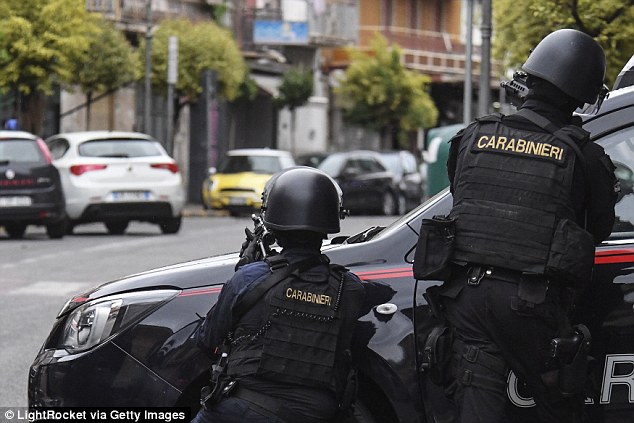 Some 250 carabinieri, Italy’s military police, were involved in the latest major crackdown on the Casamonica clan

It happened in the Romanina district of Rome on Easter Sunday in an incident that also left the 39-year-old bar owner injured.

Their arrest in May was filmed by state-run RAI television whose reporters were subsequently attacked by female relations of the pair.

As cops in the 1980s and 90s looked into the activities of other organised crime units, the Casamonica mob ring rose to notoriety.

They became known for charging huge interest on loans, such as demanding a 600,000 euros payback on a 10,000 euro loan, according to Repubblica.

Victims refuse to come forward to testify for fear of violent repercussions, a testament to Casamonica’s menacing influence felt in parts of the country they operate.

A 2015 investigation counted more than 1,000 members across 43 families while the crime empire they’ve built is reportedly worth 90 million euros. 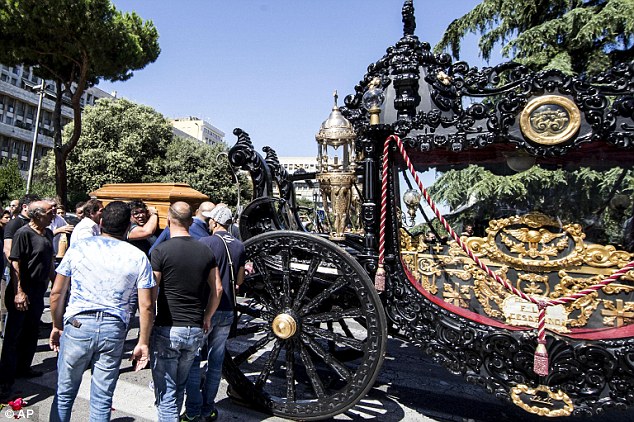 In 2015, an extravagant funeral was thrown for Vittorio Casamonica who founded the crime unit more than 30 years ago 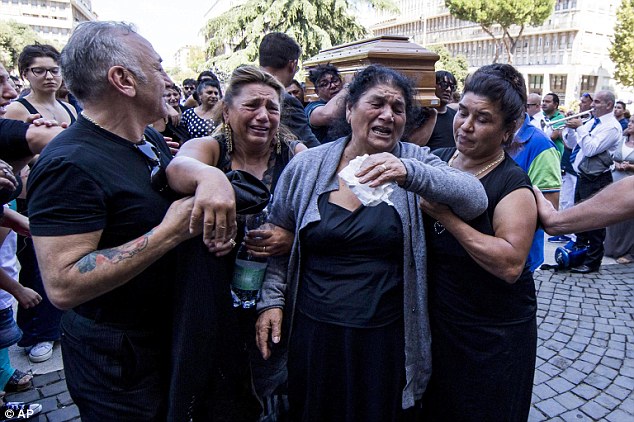 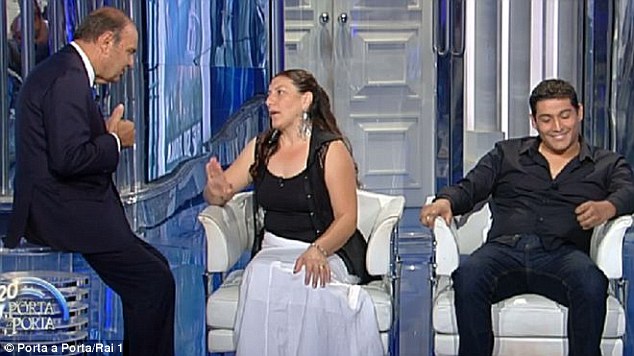 That same year they made headlines for holding an extravagant funeral for founder Vittorio Casamonica.

His coffin was pulled by six black stallions on a carriage as a helicopter flew overhead dropping red rose petals on streets lined with mourners.

An orchestra played the theme music of Francis Ford Coppola’s The Godfather as he was carried at the ceremony.

There was further outrage when Italian state broadcasters hosted the deceased’s daughter and grandson on a current affairs show.

In previous raids, cops arrested 39 members in 2012 that failed to make an impact due to the widespread structure of Casamonica’s powerful network.

As part of another raid in 2010, they seized 10 million euros-worth in assets from luxury cars, properties, land and bank accounts.