South-east Asia's response to the coronavirus had varied wildly, from world's best practice in Singapore to possible disaster in Indonesia. 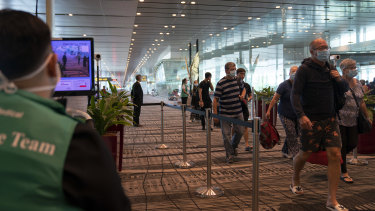 Singapore, which recorded its first case way back on January 23, has reached 345 infections. It reported its first two deaths from COVID-19 on Saturday. One of the victims was a man from Indonesia.

Clarence Tam, an assistant professor of infectious diseases at the National University of Singapore, says both Hong Kong and Singapore have handled the outbreak relatively well because of natural advantages such as being small and having well-controlled borders, which makes intensive contact tracing and screening easier.

Their experiences in 2003 with the SARS epidemic – both countries were severely affected – meant that over the last 15 years they have also invested in the capacity and infrastructure to deal with these types of outbreaks.

On one specific measure – whether to close schools, which has triggered much debate in Australia – Tam says the jury is out.

"For COVID-19 we don't currently know how much children contribute to transmission. It's possible that many cases in children are going undetected because illness in children tends to be mild, but we're also not seeing many outbreaks in schools," he says.

"In Hong Kong, schools have been closed since Chinese New Year, but the epidemic trajectory has been similar to that in Singapore, where schools have remained open." 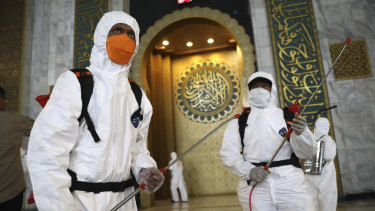 The lessons for other countries to learn from Singapore, Hong Kong, Taiwan and South Korea are that "testing early and extensively, and effective isolation, contact tracing and quarantining has been key to bringing epidemics under control".

"Any country that hasn't been able to implement these measures quickly, for whatever reason, is at high risk of uncontrolled community transmission, as we're seeing now in a number of European countries and the US," Tam says. 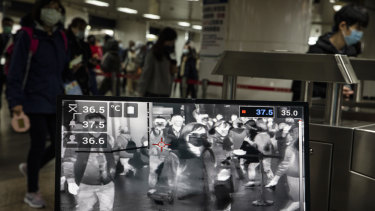 Taipei metro staff monitor the temperatures of passengers with a thermal scanner on Friday. Singapore and Hong Kong have had more successful approaches in battling the pandemic given their experience with SARS in 2003. Credit:Getty Images

It's Indonesia, which has more than 50 times the population of Singapore and which has already reported 25 deaths – despite only confirming its first infection on March 2 – that is causing the greatest concern.

The national government has been in denial about the problem for weeks, with the country having tested about 1500 out of 270 million people, compared to more than 80,000 people tested in Australia and 250,000 in South Korea. Health Minister Terawan Agus Putranto claimed prayer had kept the country virus-free and a tourism campaign has been launched on social media to capitalise on the virus' alleged non-spread to the nation. 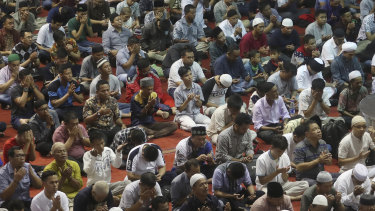 People gather for Friday prayers at the Istiqlal Mosque in Jakarta, Indonesia, on February 14.Credit:AP

Some 500,000 rapid test kits reportedly ordered from China on March 10 have still not arrived because of Health Ministry red tape, as reported by major newspaper Kompas, while many of the hospitals across the country designated to treat coronavirus patients do not yet have the specialised equipment needed.

And it was only on Friday that Friday prayers at the Istiqlal Mosque, which can hold 200,000 people, were cancelled.

On Thursday, President Joko Widodo finally ordered testing to be rapidly increased across the country to try to control and slow the spread of the virus. But if Joko's handling of the situation doesn't rapidly and markedly improve, the president could face calls to go, rather than to just sack his health minister as some moderate civil society groups are demanding.

Meanwhile, sick people are already being turned away from hospitals, it can take days to get tested for the virus and the government has only just allowed laboratories other than its own lab in Jakarta to begin processing swabs, so concerned was it until now with controlling the flow of information.

University of Queensland professor of virology Ian Mackay highlights several warning signs coming from Indonesia that signal the situation could be much worse than the publicly available numbers indicate.

"When you see a lot of deaths in a short space of time [as has happened], that suggests there has been a number of cases for quite some time. Also, we have seen many infected travellers coming out of Indonesia and that’s another canary in the coal mine," he says. "They just haven't tested enough."

The current death rate of around eight per cent of cases, too, is way higher than the international average – though this may simply reflect the proportionally small number of tests being undertaken.

Griffith University lecturer Lee Morgenbesser, an expert in South-east Asian politics, says he doesn't trust the numbers being reported by regimes in Laos and Cambodia, for example.

For every government in the region the coronavirus crisis is a competence test on a par with a financial crisis (likely coming), a major terrorist attack or a war, he says.

"This is a test against something you can’t see and which you have very little control over, at least initially. What it’s testing is how transparent you are, accountable you are and how efficient the systems you have put in place are," he says.

And while Singapore has proven itself already, other countries in the region are still playing catch-up. "Of all the countries in South-east Asia, it’s Indonesia I’m most worried about," Morgenbesser says. "It's a powder keg. It has a massive population and an inefficient bureaucracy."

The country's poor handling of the crisis is about to leave it badly exposed, he says.

Tam, the epidemiologist, says Malaysia, Indonesia and the Philippines face very specific challenges "because of their large and widely-dispersed populations and the fact that they have very sizeable migrant working populations".

And while some countries do have the capacity to mount an effective response, "we can't rely solely on our individual national capacities, because epidemics in other countries pose a continuing risk of re-importation and local transmission. This means that in order to have an effective, coordinated response, we need far greater investment in strengthening health systems region-wide."