Follow
Home » World News » JANE FRYER: Bravery in the eye of a hurricane

JANE FRYER: Bravery in the eye of a hurricane

Bravery in the eye of a hurricane: Heavier than a Spitfire and protected only by canvas, they were the unlikely winners in the Battle of Britains. And as JANE FRYER discovers, they remain a poignant tribute to our heartbreakingly young heroes of the sky

As we roar down the runway at Biggin Hill Airport in an 80-year-old Hawker Hurricane, propellers a blur, sun burning through the canopy, parachutes firmly strapped to our backs and the noise so deafening that it judders through bones, brains and bowels, those pitifully young pilots of the Battle of Britain couldn’t feel closer.

I am not flying the plane, but sitting behind pilot Peter Kynsey, 66, in a specially adapted passenger seat, experiencing the first ever passenger flight in a World War II Hurricane to mark the anniversary of the Battle for Britain. But as he grapples with the controls, eases the throttle back and edges her nose up, fear and adrenaline seem to hang in the airless cockpit amid the smell of fuel and hot metal.

For three months and three weeks through the summer and into autumn of 1940, a bloody war raged in the skies above the fields, orchards, airfields and city streets of the south of England. The German Luftwaffe was trying to gain control of the Strait of Dover to make way for seaborne landings. But the RAF was having none of it.

So every day, as vast formations of German bombers crawled through the clouds, RAF fighters raced up to meet them, doggedly diving, climbing, chasing, blasting cannons, firing guns and scribbling swirly chalky contrails in the sky.

Our 3,000 pilots were woefully outnumbered, often grotesquely undertrained and, with an average age of between 19 and 20, many were too young even to vote. (Back then the limit was set at 21.) 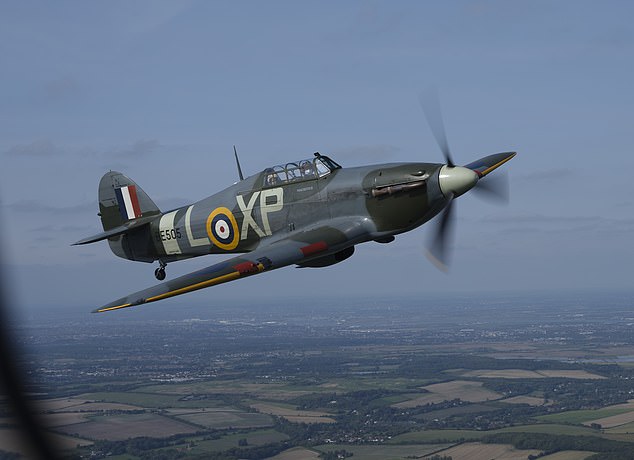 The sky’s the limit: The special twoseater Hawker Hurricane in flight. For three months and three weeks through the summer and into autumn of 1940, a bloody war raged in the skies above the fields, orchards, airfields and city streets of the south of England 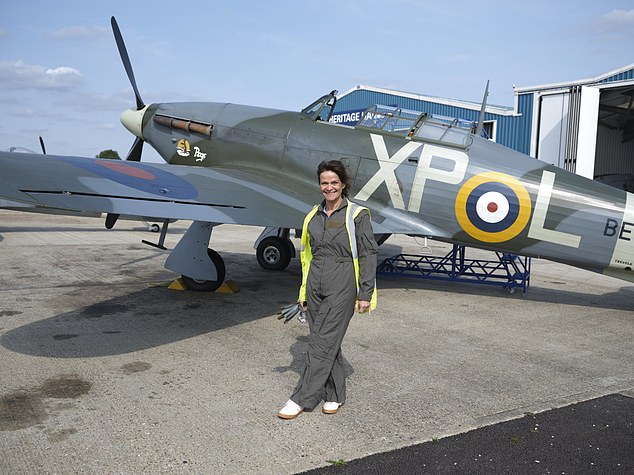 As we roar down the runway at Biggin Hill Airport in an 80-year-old Hawker Hurricane, propellers a blur, sun burning through the canopy, parachutes firmly strapped to our backs and the noise so deafening that it judders through bones, brains and bowels, those pitifully young pilots of the Battle of Britain couldn’t feel closer (pictured: Jane by the fighter)

But somehow, against the odds and at a cost of 544 lives, they protected the UK from the Luftwaffe attacks.

The Battle of Britain, as it became known, was a turning point in World War II, a David-and-Goliath struggle where Winston Churchill’s ‘Few’ (‘Never was so much owed by so many to so few’) triumphed over the seemingly greater German might. And largely thanks to the two-and-a-half-ton, 339 mph Hawker Hurricane.

For while the Spitfire has become synonymous with victory in the air, the real heroine in this battle was the older, larger, slower Hurricane, which made up the bulk of the fleet and was responsible for shooting down nearly 60 per cent (1,700) of the Luftwaffe’s casualties.

The Hurricane was never sexy like the Spitfire with its impossibly thin wings, catchy name and mythical quality. She was clunkier and in parts covered by just canvas fabric. But the war would not have been won without her, and pilots adored her.

Many of the top flying aces — including the great double amputee Douglas Bader — opted for the Hurricane over the Spitfire. In September 1940 alone, Czech Josef Frantisek of 303 Squadron, shot down at least 17 enemy planes from his Hurricane.

They chose it partly because it was a great killing machine, with four guns grouped together on each wing and a powerful Rolls-Royce Merlin III engine that allowed it to climb high and dive down out of the sun — perfect for dogfights.

But also because, as aviation historian Robin J. Brooks explains, it could take more punishment: ‘It was part fabric, so the bullets would go straight through. So the pilots could land, slap a patch on it and go up again, whereas a Spitfire would be badly wounded.’ 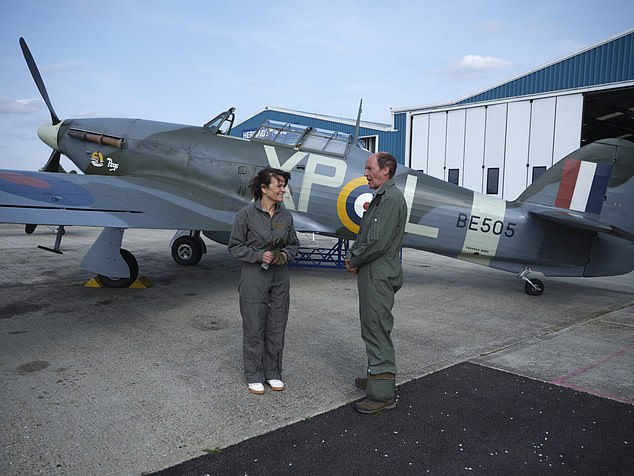 I am not flying the plane, but sitting behind pilot Peter Kynsey, 66, in a specially adapted passenger seat, experiencing the first ever passenger flight in a World War II Hurricane to mark the anniversary of the Battle for Britain

As one celebrated ace, James ‘Ginger’ Lacey, put it, he’d rather fight in a Hurricane on the grounds that it was made of ‘non-essential parts’.

‘I had them all shot off at one time or another and it still flew just as well without them,’ he said. There are numerous stories of pilots landing in Hurricanes with no idea anything was wrong — until they saw the horrified faces of the ground staff rushing towards them.

All of which is, of course, very reassuring for a novice like me, now swooping at more than 200mph, courtesy of flyaspitfire.com, worrying something could go wrong and trying not to look at the sign by my left shoulder which reads: ‘Top speed 350mph, diving.’

It is a visceral experience. We swoop above fields and barns, towns and motorways. We see London’s skyline, so different now, but protected for us by those brave young pilots. We dominate the sky.

Today, the guns are just for show, and, unlike the Battle of Britain pilots, I have company in this specially adapted and painstakingly restored plane that is the world’s only two-seater Hawker Hurricane, courtesy of Hawker Restorations. Someone who has been flying planes for 50 years, not just a few weeks like ‘The Few’ who took to the sky in 1940.

It is still astonishingly loud, so bumpy in parts I find myself reaching for the sick bag and, yes, at times, scary. 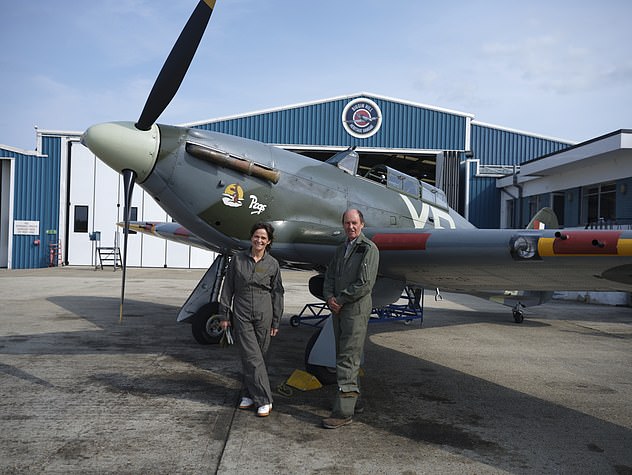 Yet all the while, I can’t shake the feeling that while I have lived more than half my life, the pilots who battled so bravely in these planes were barely adult. Their youth and inexperience was breathtaking. They were just starting out. Today, they’d be off to university, learning to drive, or embracing first jobs. Young and idealistic.

‘Dear Mum and Dad,’ wrote 19-year-old Pilot Officer John Carpenter, of 222 Squadron, on August 29, 1940, just before they moved into the thick of the battle. ‘I am writing this at five in the morning, we are leaving at eight and should be there by nine. I hope to be shooting Jerry down by ten.’

(Carpenter’s next letter came three days later after downing two German planes and himself being shot down and baling out: ‘Getting lots of fun here — just what we have been waiting for.’)

No wonder they were known as the Fighter Boys. They were such babies that Air Chief Marshal, Lord Dowding, called them his ‘chicks’, for goodness’ sake. But they enlisted in droves (more than half were non-commissioned officers or NCOs) and completed a 12-week training course, often comprising just 100 flying hours.

Then they were off and up, often four or five times a day, decked out in lucky charms and St Christopher pendants and responding to radar early warnings that the Germans were on their way.

Each sortie was short — between 30 and 45 minutes long — and sharp. If they’d downed an enemy plane, their return would include a 360-degree Victory Roll in the sky above the airfield to demonstrate success to those below.

While the officers and NCOs had separate messes, ‘The Few’ were drawn close by their love of flying, willingness to take risks and a courage that was brutally tested.

Many a pilot’s locker door was garnished by the RAF’s Ten Rules of Fighting, as written by the South African Adolph ‘Sailor’ Malan, who led 74 Squadron during the height of the Battle of Britain.

They were simple and pitiless: ‘Wait until you see the whites of your opponent’s eyes. Fire short bursts of one to two seconds and, while shooting, think of nothing else. Brace the whole of your body, have both hands on the stick. Always keep a sharp lookout, never fly straight and level for more than 30 seconds, go in quickly, punch hard and get out . . . ‘ were a few of the stark pointers. 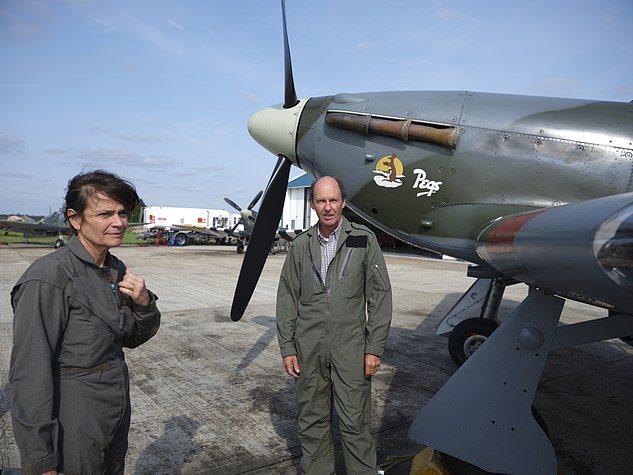 According to historian Mr Brooks, the keys to success were ‘good eyesight for shooting, stamina for manoeuvring the heavy plane around in dogfights and courage’ Because, time and again, they’d roar down runways at Biggin Hill and other airfields across the south of the country and into the sky.

Until one day, despite all their lucky charms, they didn’t return.

But that didn’t stop them. On and on they went, somehow girding their loins for death.

Up in the air, they were alone. Each man against the enemy in a battle of wits and skill and luck, in a plane designed under pressure of war, full of idiosyncrasies and far more challenging to master than today’s light aircraft. (As I discover when, encouraged by Peter Kynsey — a former Thomson Airways pilot with a parallel career in airborne acrobatics — I have a go at steering it myself with the joystick in front of me. ‘Just gently. Gently!’ he shouts over the crackling headset as we veer to the left.)

Despite their daredevil image, the pilots’ lives were anything but glamorous. As the battle raged, even liaisons with women faded away as the men decided romantic entanglements weren’t fair when they might be dead tomorrow.

Most were also remarkably modest; they felt they were simply ‘doing their job’ and were often surprised at the reception they got from the public.

Today, just one of ‘The Few’ is still with us: John ‘Paddy’ Hemingway, 101, who was shot down four times — once over the English Channel — and was later awarded the Distinguished Flying Cross for bravery.

He now lives in a care home in Dublin, where he routinely plays down his wartime bravery.

What a man. What men. What astonishing bravery and self-sacrifice.

As we roar back to the airfield and Peter Kynsey treats me to an unearned Victory Roll — we spin in the air and sky becomes the ground — the cockpit suddenly feels very full of all those brave young pilots who gave their lives to protect our country.

bravery, eye, FRYER, in, Jane, the
You may also like: