London: Boris Johnson says Britain will transform into the world's supercharged Superman-like champion of free trade as countries turn against open trade amid economic fears and the spread of coronavirus. 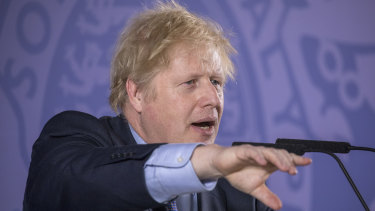 Boris Johnson, UK prime minister, gestures to take a question from the audience after delivering a speech on “Unleashing Britain’s Potential” at the Old Royal Naval College in London, UK. Credit:Bloomberg

The British Prime Minister's announcement, made during a major speech in Greenwich, signalled a major departure from Vote Leave's promise that Britain could leave and still enjoy the "exact same benefits" of the single market once it left the bloc.

Johnson said he wanted a deal with Australia's "Prime Minister ScoMo" to be one of the "first four" trade deals Britain would strike but said he would require a complete break from the EU regulations and standards to enable it to set its own regulations which he said in many cases exceeded those of the bulk of EU nations.

Launching a passionate defence of free trade, Johnson suggested the closure of borders to Chinese people as a result of the coronavirus outbreak was an overreaction.

"We are starting to hear some bizarre autarkic rhetoric, when barriers are going up, and when there is a risk that new diseases such as coronavirus will trigger a panic and a desire for market segregation that go beyond what is medically rational to the point of doing real and unnecessary economic damage," he said.

"At that moment humanity needs…some country ready to take off its Clark Kent spectacles and leap into the phone booth and emerge with its cloak flowing as the supercharged champion, of the right of the populations of the earth to buy and sell freely among each other.

"I can tell you in all humility that the UK is ready for that role," he said.

Johnson, who headed the Leave campaign in 2016, said he would not accept future alignment of British standards with EU regulations because he wanted Britain to be a beacon of free trade around the world, as he took a swipe at US President Donald Trump, warning that politicians were "failing to lead."

"The mercantilists are everywhere, the protectionists are gaining ground. From Brussels to China to Washington, tariffs are being waved around like cudgels," Johnson told the audience of diplomats which included Australia's High Commissioner to the UK George Brandis. 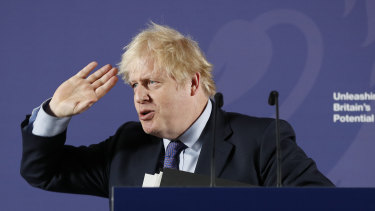 British Prime Minister Boris Johnson outlines his government’s negotiating stance with the EU after Brexit, during a speech at the Old Naval College in Greenwich in London, England.Credit:Getty

"It is always important to translate what the Prime Minister says into Earth-Speak," Gardiner said.

"His comments this morning can be interpreted as saying: ‘We always knew that what we were promising was complete and utter nonsense and therefore in accepting today, that it is not possible to secure the exact same benefits outside the EU as we enjoyed inside, I am simply proving that we were right all along in knowing that what we told people was wrong from the very beginning.'"

"As for an Australian-style Free Trade Agreement: this doesn’t exist. That’s right there isn’t one.

"There is only an old Economic Partnership that basically leaves us trading on WTO rules."

as, Defends, free, Johnson, trade
You may also like: