‘Kafkaesque’: How Victoria Police worked hard to keep their secrets blanked out

“It is a bit Kafkaesque, isn't it?” the head of the Lawyer X commission remarked wryly, and not for the first time.

Before her was yet another request from Victoria Police that she shut down public hearings to take evidence in secret. It was October 2019, and the material under discussion was so profoundly sensitive, according to police lawyers, that even the application to close the court would need to be made in a closed court. 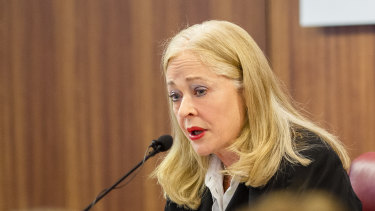 Commissioner Margaret McMurdo, who led the Royal Commission into Management of Police Informants.

In a normal criminal case, the police and the Director of Public Prosecutions work hand in glove, but not on this occasion: “We have absolutely no understanding of what this application is about,” a DPP lawyer remarked.

The court was duly closed.

The two-year Royal Commission into the Management of Police Informants was supposed to throw light on the whole, murky question of how lawyer Nicola Gobbo had come to be used as a police source.

In reality, it came to be defined by closed hearings, enough suppression orders to literally paper a courtroom, and documents obscured by black-ink redactions. The vast majority of requests for secrecy were made by Victoria Police — the same body whose secretiveness had led to the need for a Royal Commission.

Multiple nuggets of information that were seemingly insignificant, and many that were already matters of public record, were excluded from the public eye.

Victoria Police sought to suppress details about the smoking habits of an informer; they tried to redact the term “underworld” from a 16-year-old newspaper story that can still be found online; and they wanted to prohibit the use of the phrases “recruit”, “bump into” or “assisting police” as too revealing of the secrets of their tradecraft.

Then there were the pseudonyms. More than 100 informers, criminals and police were assigned false names to protect either their safety or their reputation. As an added layer of protection, some pseudonyms were changed multiple times in the course of the commission, until not even those in charge could keep track.

“I’m not sure,” a lawyer for police replied.

“I’m not sure I can either,” Commissioner McMurdo said.

Some people received one pseudonym for when allegations were made about their misconduct, but a different one when they were making allegations about the misconduct of others.

Disputes over identity included an attempt to suppress the brand of cigarettes preferred by a chain-smoking underworld informer who helped bring down the Mokbel drug cartel. Police argued he could be identified by reference to the particulars of his habit.

The pseudonym master list, known as Exhibit 81, was the commission's most closely guarded secret. The version with the latest code names was distributed to a select few people each morning and then returned to be kept under lock and key each night.

The identities behind the pseudonyms — and scores of other details deemed too sensitive for public airing — were protected by “exclusion” and “non-disclosure orders” that came with the penalty of jail time if violated.

More than 370 orders were issued over the life of the royal commission — an average of nearly three for every day of hearings.

Each time one was made, a paper copy was printed and fixed to the door of the hearing room. Soon, they papered the neighbouring walls. The prohibitions forced witnesses and lawyers into bewildering verbal gyrations.

By June 2019 — less than six months into proceedings — the hearings had become, as Commissioner McMurdo put it after another baffling exchange, a “magical mystery tour”.

Victoria Police also wanted to keep sensitive documents from the public eye, using “public interest immunity" claims. Their objective was to prevent information escaping into the public realm that might reveal the identities of “protected” officers, witnesses, informers, or to disclose police methodologies and investigative techniques. 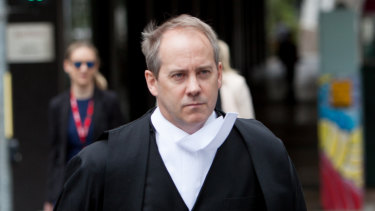 PII objections are taken extremely seriously by judicial bodies, and each objection — no matter how seemingly minor or innocuous – had to be considered by Commissioner McMurdo. There is no specific estimate of how many were made, only that there were “thousands”.

In one case, Victoria Police objected to any evidence being presented about an underworld murder having been captured live on a police covert recording device, even though the precise circumstances of that 17-year-old crime had been recreated in a scene from the popular TV series Underbelly.

The royal commission admitted that the volume of PII applications meant it was often forced to accept police arguments at face value because they did not have time or resources to put them to the test. But it clearly rankled the Commissioner.

“You don't want to PII that?” Commissioner McMurdo asked the police lawyers.

Jeremy King, a lawyer who represented two people who Ms Gobbo had informed on, said it was the most difficult proceeding he’s been a part of because of the control police exercised over information.

Commissioner McMurdo’s frustration was evident in her final report: “Victoria Police repeatedly told the Commission that its ability to make and address PII claims was hampered by a lack of resources,” she wrote, then noted that it had been somehow able to speed up the process on particular applications when criticised by the media.

Victoria Police, in their defence, pointed to the task of analysing 52 million potentially relevant records stretching back nearly three decades. Eventually some 650,000 relevant pages were produced.

“Thousands of documents were highly sensitive and had to be reviewed and redacted to protect the identities of other persons who have assisted police, which is a highly complex and difficult task,” a spokeswoman said.

As recently as Thursday, Chief Commissioner of Police Shane Patton told ABC radio"we've been totally been open in our disclosure".

"We provided everything that has been requested and that we were able to provide," he said.

But Commissioner McMurdo ultimately found that many of Victoria Police’s PII claims and justifications for failing to hand over documents lacked substance, did not sufficiently value the work of the commission and the public interest of airing these issues. And that, she wrote, had a “detrimental consequence” on her work.

But there was not much she could do about it. Under the Victoria’s Inquiries Act, which governs the operation of royal commissions, police control how PII claims are managed, leaving them virtually in charge of the process.

The Royal Commission has recommended recrafting the legislation to bring it into line with other jurisdictions so that if or when Victoria Police was again called to account for their actions, their scope for refusing cooperating would be curtailed.

It’s one of the 111 recommendations the Andrews government has pledged to implement.