Park Hills, Kentucky: Residents of this affluent northern Kentucky town emerged from a turbulent holiday weekend with a question: how did a viral video showing local students interacting with a drumbeating Native American man on the steps of the Lincoln Memorial suck their community into the fractious national debates about politics and race?

President Donald Trump was tweeting about them. Out-of-town protesters were showing up with signs, chanting in the street. And death threats had shut down Covington Catholic High School. No one knew when it would be safe to open again. 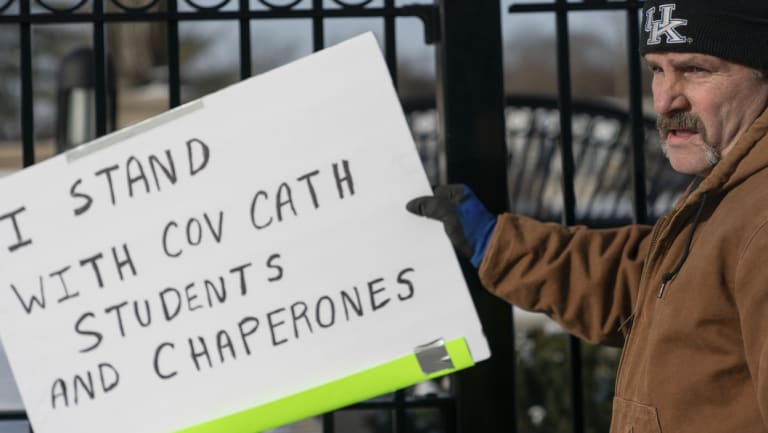 Firestorm: A man places a sign showing support for the students of Covington Catholic High School.Credit:AP

Residents warily watched the furor unfold from behind closed doors, largely resisting the opportunity to speak out – even as they stewed over the way they were being portrayed. They felt they had become the latest victims of a hyper-political atmosphere, where one video clip can ignite a nationwide fury, magnified by social media and 24-hour news coverage.

"They are kids. Everyone forgets that," said Park Hills Mayor Kathy Zembrodt, who expressed anger about the initial portrayal of the students as aggressors in the Lincoln Memorial encounter.

Her sentiments were reflected across this town of 4000, where many said the students were unfairly maligned in a rush to judgment based on a truncated video clip. The viral video showed a large group of Covington Catholic High School boys on the memorial steps in Washington, where students travel annually for the anti-abortion March for Life. One of the boys stands inches away from the face of Nathan Phillips, a Native American elder, who was beating a drum during the Indigenous Peoples March. The boy's classmates stood nearby, laughing and gesturing – what many interpreted as mocking.

But longer versions of the encounter soon appeared, showing it began when a group of Hebrew Israelites hurled offensive language at the teens. And the students said they were dancing and singing along with the Native American music, not mocking it.

She found it odd. The behavior didn't fit what she knew of the students at Covington Catholic, where her husband is an alumnus and her three sons are likely to enroll. But after a nearly two-hour video of the incident started making the rounds, her confusion turned into anger.

"Our children were used as pawns for an ulterior leftist agenda," she said.

In a series of tweets on Tuesday, local time, Trump emphasized that perspective, saying the students of Covington Catholic "have become symbols of Fake News and how evil it can be". 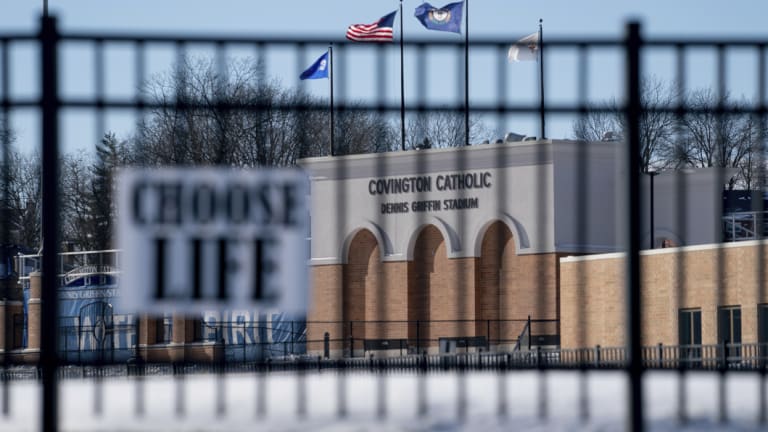 Nathan Phillips has offered to meet with the students.Credit:AP

"His whole frame is that they were somehow attacked and behaving defensively," said Daniel Paul Nelson of the Lakota People's Law Project. "No, they were not, not towards Nathan. What they did to Nathan was completely offensive, not defensive."

Phillips has offered to meet with the students and have a "dialog about cultural appropriation, racism, and the importance of listening to and respecting diverse cultures", according to a release from the Indigenous Peoples Movement. Nelson said organizers plan to try to contact Sandmann and the school.

"The objective here is not to make the children [look] bad," Nelson said.

But at Covington Catholic, concerns that the videos made the students look bad shifted to worries about actual threats of violence. Before dawn Tuesday, police cars on Dixie Highway blocked the school's entrances. Students and staff were ordered to stay away. The diocese issued a statement promising a "third-party investigation" into the Lincoln Memorial incident.

"This is a very serious matter that has already permanently altered the lives of many people," the statement read. "It is important for us to gather the facts that will allow us to determine what corrective actions, if any, are appropriate."

Websites for Covington Catholic High School and the Catholic Diocese of Covington have been taken down.

"They have been so slammed with messages and threats, very serious threats of violence, that I don't know when they plan to reopen," said Mike Schafer, director of communications for the neighboring Cincinnati archdiocese.

Regardless of whether Covington Catholic was going to be open Tuesday, Marty Boyer had already made his decision: he was going to keep his son, a junior, home for the day.

"When I think about security in the context of this, I evaluate how quickly this story was taken out of proportion; it is not a big deal to keep him home for a day," Boyer said. "Keeping him safe at home for a day is not going to wreck his education."

A neighbor spoke angrily about the initial public response to the video as she walked past the imposing brick house owned by the Sandmanns.

"They're a nice family," she said, adding that their children went to grade school with hers.

The house, in an upscale development about 10 miles from the school, stood empty. Tire tracks showed somebody had driven out since Saturday night's snowstorm. And footprints marked perhaps less welcome arrivals: a reporter's note was wedged into the front door.

The neighbor, who asked not to be named, had not permitted her daughters to travel to Washington for the March for Life, despite their pleas. The political atmosphere in Washington has become so charged, she said, that she hesitated to expose teenagers to it.

Many in the town rushed to defend the boys. In grocery stores, coffee shops and bars, adults closed ranks behind the embattled students.

Mary Sue Wigger, whose husband graduated from Covington Catholic and whose niece joined this year's march, reflected on how her feelings had evolved as she followed the series of videos and the changing story.

"The scariest thing," she said, "is there are so many different versions."

She was shocked by the vitriol of many online messages – and by how quickly it spread; by the time she showed one post to her husband, it had been shared 60,000 times.

Covington Catholic is a competitive school, Wigger said, with a strong academic and athletic reputation that sometimes creates jealousies. The low-slung brick building and its stadium are prominent features of Park Hills, which is more than 90 percent white. That sense of privilege intensified the criticisms initially directed toward the students.

Covington Mayor Joe Meyer condemned the boys' behavior in an op-ed, distancing his own more diverse city from them and saying the videos "do NOT represent the core beliefs and values of this city".

Boyer, the Covington Catholic parent, wondered whether the students who took the District of Columbia trip got in over their heads by wearing pro-Trump hats on the Mall.

Carolina Castoreno-Santana, executive director of the American Indian Center of Indiana and one of the speakers at Tuesday's protest, saw the pro-Trump hats as provocative.

"Wearing that hat is a symbol of hatred on native lands," she said.

He said he had supported Trump's campaign and came because he was worried by the threats against children. He had a message of reconciliation.

"My hat," he said, "represents coming together, not tearing people down."

He took off his hat as he listened to an Indian prayer. He heard Guy Jones of the Hunkpapa Lakota speak. And then he dodged across the crowd.

The two men looked at each other and embraced. They exchanged numbers and an offer to meet for coffee or a meal.

"That's what I was hoping for," Jones said.

The two said they have arranged to meet on Friday.