With Kim summit, Trump retreats from US moral leadership

Washington: Beaming in the moments after his summit with Kim Jong-un, Donald Trump was asked about North Korea's history of human rights horrors. 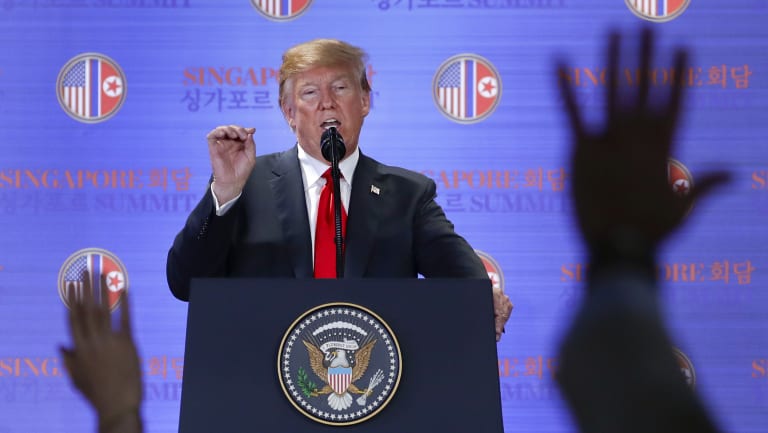 Trump's verbal shrug in Singapore represented a striking change from the way US presidents have viewed their job, a shift from the nation's asserted stance as the globe's moral leader in favour of an approach based more on trade-offs with adversaries and allies alike.

The President, who quickly left for the long journey home after his whirlwind summit with the North Korean leader, made clear that his main interest – almost his sole interest – was taking a first step toward denuclearising the Korean Peninsula. There was no lecturing of Kim over how to treat his own people in a nation that is estimated to have between 80,000 and 120,000 political prisoners and remains one of the world's most closed and oppressive societies.

Though Trump is far from the first American president to work with an unsavory counterpart to achieve a strategic goal, his decision to broadcast that he tacitly accepts Kim's history of atrocities was a sharp break from the position of presidents from both parties to set America as the exemplar shining city on a hill for other nations to emulate. 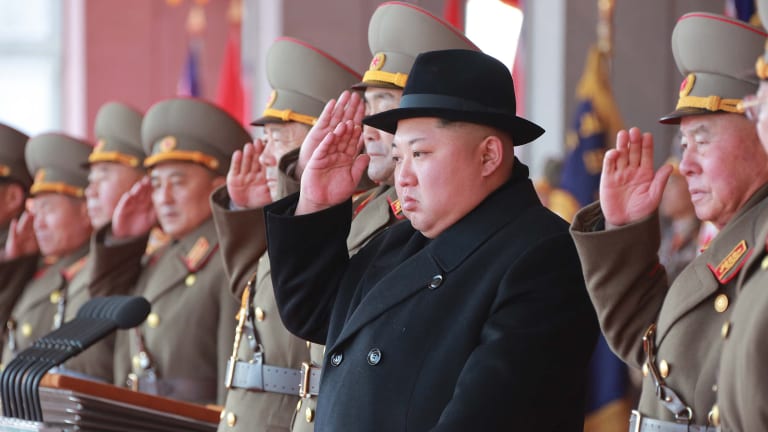 It has been much the same at home.

He pointedly refused to exclusively blame neo-Nazis and white supremacists for last year's deadly clash with anti-racist demonstrators in Charlottesville, Virginia, suggesting there was blame "on both sides." And when he asked to condemn the murders carried out under the rule of Vladimir Putin in Russia, Trump retorted "There are a lot of killers. You think our country's so innocent?"

But Trump did draw graphic attention to North Korea's human rights record in his State of the Union address in January, and championed the plight of US citizens who had been imprisoned in Pyongyang. So he was all but bound to address the issue in some form in his unprecedented meeting with Kim. He told reporters that he did raise the cases of Japanese abducted by North Korea in the 1970s and 1980s and the plight of persecuted Christians in North Korea.

However, he acknowledged that human rights was a small part of his talks with Kim. And it was not mentioned at all in their joint statement.

"I think he liked me and I like him. And I understand the past and, you know, nobody has to tell me, he's a rough guy," Trump said of Kim to Voice of America at the conclusion of the summit.

"He has to be a rough guy or he has been a rough person. But we got along very well. He's smart, loves his people, he loves his country." 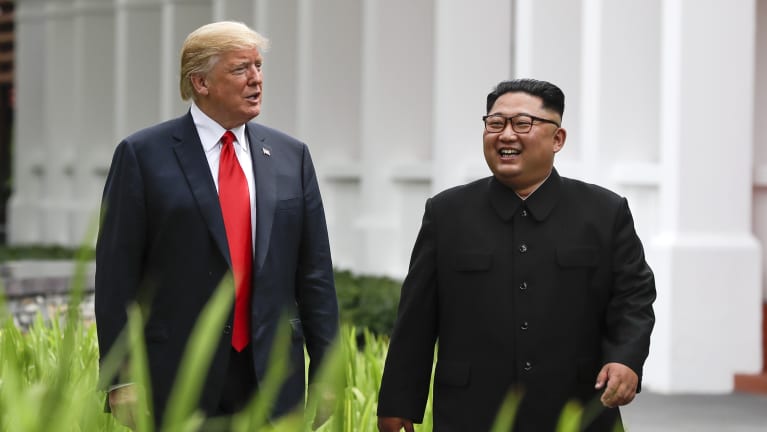 Donald Trump and Kim Jong-un walk together after lunch.

Adding to his praise, Trump tweeted on his way back to the US: "Got along great with Kim Jong-un who wants to see wonderful things for his country. … Anyone can make war, but only the most courageous can make peace!"

As the world hung on his every word at the conclusion of the historic summit, Trump said he had mentioned human rights concerns with Kim, but he stressed that the "main purpose of what we were doing is denuking." 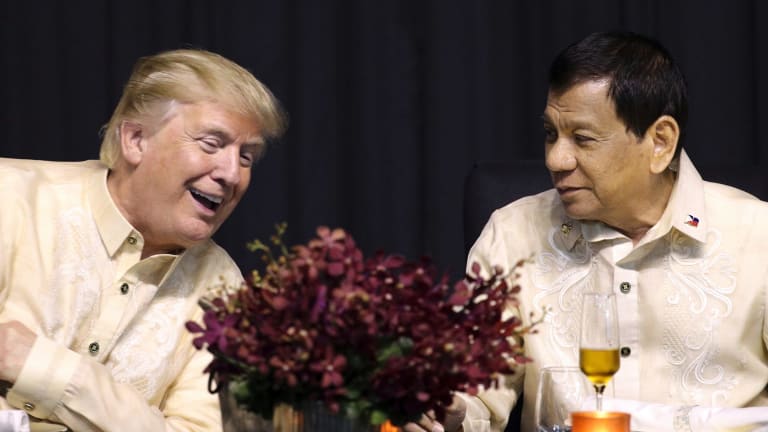 Instead of using the summit spotlight to demand that Kim protect basic liberties, Trump offered a moral equivocation that evoked the kid-gloves approach he has also taken in meetings with other authoritarians for whom he has expressed admiration. Like Rodrigo Duterte of the Philippines, for example, and Xi Jinping of China. And King Salman of Saudi Arabia.

The template was established a year ago in Riyadh on Trump's first international trip.

Past administrations have also often skirted human rights in their dealings with Pyongyang, which views the issue as an implicit threat to the legitimacy of its totalitarian regime. But Trump's relative silence on the issue in Singapore drew some sharp rebukes.

"While we should never refuse to speak with our adversaries, neither can we ignore the horrendous human rights abuses North Korea's leaders perpetrate against their own people," said former Vice President Joe Biden. "Talking to dictators is one thing; embracing them is another." 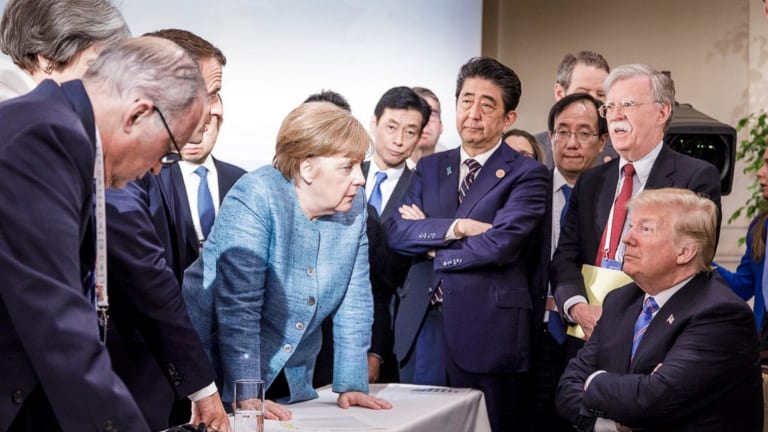 Heather Conley, vice president at the Centre for Strategic and International Studies, said the impact of Trump's upbeat meeting with Kim and his effusive description of the potential of the relationship with North Korea – which has often threatened the US with pre-emptive nuclear attack – was all the more jarring as it came days after his bruising encounter with America's closest Western allies at the G7 in Canada. She said it would have repercussions for how the United States was viewed around the world.

"When the President gives a thumbs-up with the leader of a regime that has killed thousands, that's a strong and discouraging message to those who are trying to support human rights around the world," she said. "It places a question before all Americans as they witness two very different summits with two very different kinds of leaders: Who are we? What are the values that we stand for? Are we exceptional or are we no better than any other nation?" 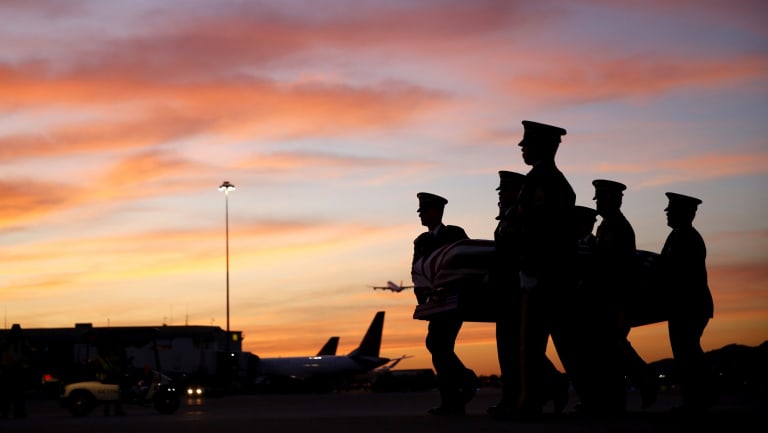 Servicemen carry a flag-covered casket containing the remains of US Army Cpl. Robert Graham who died in a North Korean prison camp in 1951, but his remains were only identified in 2016.

The United States has been in the forefront of an international effort in recent years to highlight North Korean abuses. Washington backed a landmark 2014 UN commission of inquiry that found that North Korea's government had committed crimes against humanity, and Kim Jong Un himself is under US sanctions for alleged involvement in serious human rights abuses.

Human Rights Watch said Trump had pushed the issue aside at the summit, and lambasted him for suggesting that the tens of thousands of prisoners in the North Korean gulag were "great winners" because his diplomacy with Kim would lead to change.

"North Koreans being brutalised daily in labour camps are not 'great winners' today, and they won't be winners tomorrow – or anytime soon. Nor are the millions of other North Koreans who are routinely subjected to forced labor and deprivations of their basic rights, not just to freedom of speech but to adequate food, housing, education, and healthcare," said John Sifton, the rights group's Asia advocacy director in Washington.

But Trump, in an interview with the American ABC at the summit's end, defended his cold-eyed pragmatism as part of the hand he was dealt with Kim while on a quest for a greater good.

from, Kim, leadership, moral, retreats, summit, Trump, Us, With
You may also like: