Lebanon’s flag has been projected onto Tel Aviv’s city hall in a rare display of solidarity following the devastating explosion that shocked Beirut.

Israel’s latest gesture, following an offer of humanitarian aid hours after the blast yesterday afternoon, is surprising given that the countries are technically at war.

‘Tonight we will illuminate the city hall with the Lebanese flag,’ Tel Aviv’s Mayor Ron Huldai said on Twitter.

‘Humanity precedes any conflict, and our hearts are with the Lebanese people in the wake of the terrible disaster that befell them,’ he added. 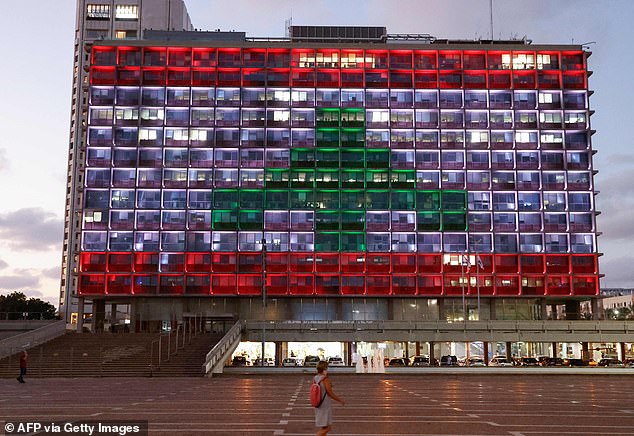 The move has faced criticism from some of Israel’s right wing politicians.

Israel’s minister for Jerusalem affairs, a member of the far-right Jewish Home party, condemned the gesture following the explosions at Beirut port that killed more than 100 people and injured thousands of others.

‘It is possible and necessary to provide humanitarian aid to civilians who were hurt in Lebanon, but waving an enemy flag in the heart of Tel Aviv is moral confusion,’ Raffi Peretz wrote on Twitter.

Israel and Lebanon are still technically at war, while tensions with the powerful Lebanese Shiite movement Hezbollah have spiked in recent weeks. 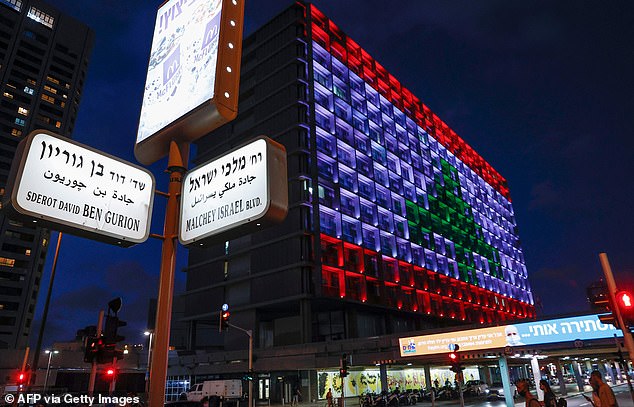 Israel’s latest gesture, following an offer of humanitarian aid hours after the blast yesterday afternoon, is surprising given that the countries are technically at war

Hezbollah and Israel fought a devastating month-long conflict in 2006 in which Lebanon’s infrastructure was badly damaged. The war killed more than 1,200 Lebanese, mostly civilians, and 160 Israelis, most of them soldiers.

But on Tuesday, hours after the massive explosions at Beirut’s port, right-wing Prime Minister Benjamin Netanyahu said his National Security Council had offered Lebanon aid, via the UN.

Addressing Israel’s parliament on Wednesday, Netanyahu extended ‘condolences to the people of Lebanon,’ and said Israel remained ready to offer ‘humanitarian assistance’ to those affected.

In Gaza, a Palestinian territory where the poverty rate exceeds 50 percent due at least in part to a crippling Israeli blockade, residents of Khan Yunis organised a blood drive for casualties in Beirut.

Israel tightly controls everything that enters and exits the Islamist Hamas-ruled Gaza Strip, but local authorities in Khan Younis said they were working with the Red Cross and Red Crescent to deliver the donated blood to Lebanon.

flag, Lebanese, Onto, projected, t
You may also like: