‘So beautiful!’ Stunning light pillars illuminate the night sky of a Chinese city due to an optical illusion

Residents in a northern Chinese city have been stunned by a spectacular optical phenomenon illuminating in the night sky.

Millions of social media users were also left in awe at the extraordinary scene, known as light pillars or sun pillars, caused by a bright light source reflected off falling ice crystals in cold weather. 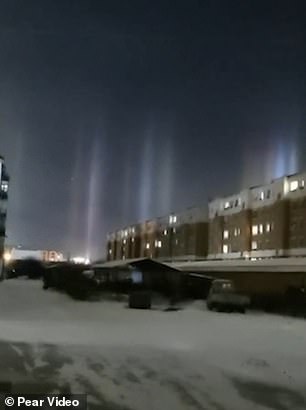 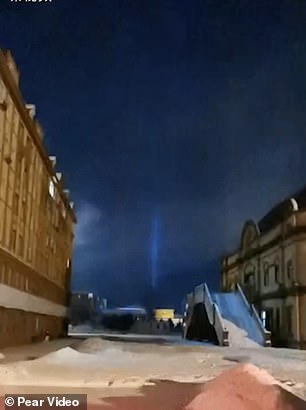 Amazed by the rare natural phenomenon, residents of Genhe rushed to capture the shining light columns on camera.

Dozens of beams – in blue, red and yellow – can be seen appearing above buildings and connect the city with the night sky.

Millions of social media users were also stunned by the optical illusion after the footage was featured on Chinese media, including video news outlet Pear.

One viewer cried: ‘This is so beautiful. As a southern person, I would love to witness it but can’t handle the cold!’

Another commenter said: ‘It looks like a rainbow bridge.’ 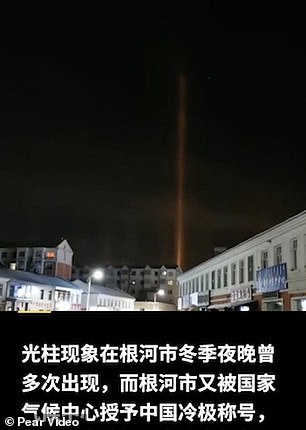 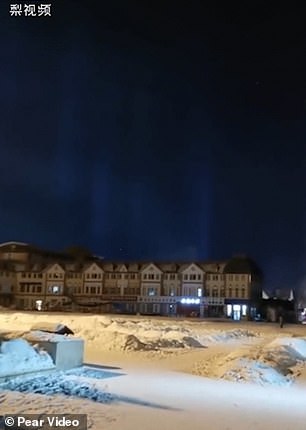 The scene spotted in China was a phenomenon commonly known as the light pillars, an optical illusion that happens in low temperatures, said Grahame Madge, a Met Office spokesman

The scene spotted in China was a phenomenon commonly known as the light pillars, an optical illusion that happens in low temperatures, according to Grahame Madge, a Met Office spokesman who has viewed the footage.

Mr Madge told MailOnline: ‘Light pillars are rare optical illusions which only form when ice crystals are suspended in the column of air above a light source.

‘These tiny crystals then reflect light towards the observer looking like a pillar of light extending from the light source into the night sky,’ he said.

Such scenes only occur in those climates subject to intensely cold still air, creating the right conditions, Mr Madge added.

Light pillars are most often seen when the sun is low in the western sky before sunset, or low in the east just after the breaking of dawn. The moon or streetlights can also create this light phenomenon.

Genhe in the far northeast of the Inner Mongolia Autonomous Region has a monsoon-influenced subarctic climate with dry, long winters.

With an annual average temperature of minus 5.3C (22.5F), the city is dubbed by Chinese weather authorities ‘China’s pole of cold’. The lowest temperature ever recorded in Genhe is minus 58C (minus 72.4F).

In July, residents in a southern Chinese city were shocked to spot a mysterious cluster of lights that resembled an illuminating UFO in the night sky.

But the local weather authorities later identified the strange scene as light pillars.

The officials said in a social media post: ‘We call these ‘warm night light pillars’. They form in conditions that are even more particular than regular light pillars.

‘[The formation] not only requires the existence of high-altitude clouds and the absence of low- and medium-altitude clouds. It also needs high humidity in the air, high atmospheric visibility, low wind, as well as ice crystals.

WHAT IS A LIGHT PILLAR, OR SUN PILLAR?

illuminate, light, N, Pillars, the
You may also like: