A baby monitor lizard put up an incredible fight as it battled a snake for ages trying to avoid being eaten.

The western yellow-bellied sand snake and the young lizard battled each other for over an hour in MalaMala game reserve in Mpumalanga, South Africa.

The video starts with the lizard completely wrapped in the snake’s clutches with both creatures biting onto each other. 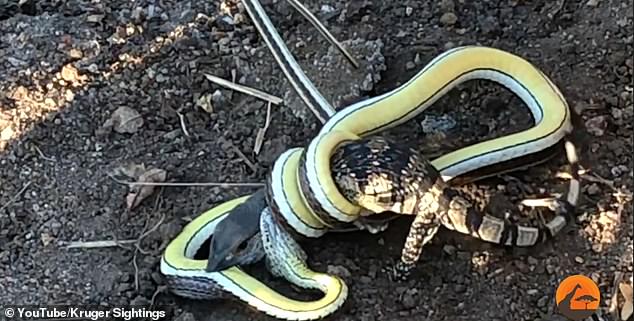 This baby monitor lizard fought for hours to unravel itself from the western yellow-bellied sand snake in the MalaMala game reserve in Mpumalanga, South Africa

The lizard slowly unravels itself but cannot get its neck free as the snake has its teeth firmly stuck into it.

The snake constantly tries to re-wrap itself around the lizard’s body but the lizard keeps moving away.

The reptiles struggle like this for hours until the snake is finally able to constrict the lizard and swallow it whole.

Kristy DeLange was with her family at the game reserve when she witnessed the intense fight.

She told Latestsightings.com that her family did not know who was going to win for a long time. 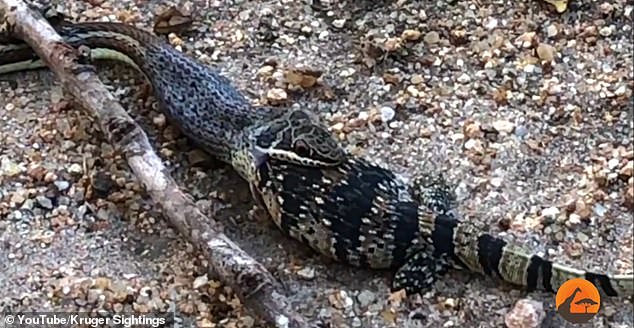 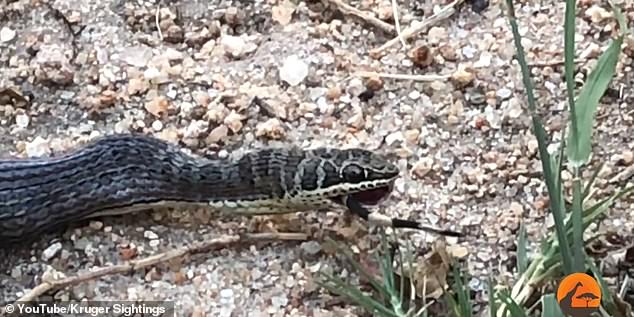 Kristy DeLange, who saw the intense fight said it her and her family did not know who was going to win until the very end

She said: ‘At first, we were confused as to who the actual hunter was, and who was being hunted.

‘Both creatures had a good grip and the balance of power seemed to keep shifting from one to the other.’

She said it was exhilarating to watch the tense fight and that people should also look out for smaller animals when they are on safari.

‘The sighting ended with a scrumptious, well-deserved meal for the snake,’ she said.

agai, Epic, fight, lizard, puts, up
You may also like: