London's Southbank Centre could be closed until April 2021

London’s Southbank Centre could be closed until April 2021 with thousands of events cancelled as it battles deficit of at least £5.1m due to Covid crisis

London’s Southbank Centre has warned it could be closed until at least April 2021 as the coronavirus pandemic leaves it facing a deficit of at least £5.1million.

Museums, galleries and other venues have been shut throughout the Covid-19 pandemic, leaving many with no option except to burn through their reserves.

West End theatres are expected to be shut until at least June 29, while the capital’s larger art galleries like the Tate Modern could reopen from the start of July.

Southbank’s chief executive Elaine Bedell warned the centre was ‘not alone,’ as it faced an uncertain future, but assured visitors bosses were doing all they can to protect it. 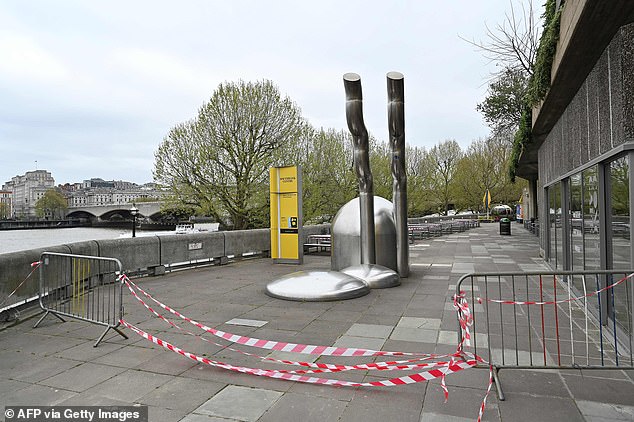 Barriers and tape seal off the area outside the Southbank Centre after it closed for the coronavirus lockdown, bosses say the arts venue will lose at least £5million as a result of closing

Southbank Centre bosses say a £5.1million deficit for the 2020/21 financial year is a best case scenario, despite furloughing the majority of staff, while warning redundancies will need to be made.

The centre called for further Government support, saying the forecast includes using up all its reserves, taking £4 million from the Government’s furlough scheme, and spending its £19.2 million annual grant from Arts Council England (ACE) “to effectively mothball the buildings”.

Performances from Randy Newman and the Last Night of Spring Proms had already been cancelled, now the Southbank Centre has warned even more events will be scrapped until next year

It said there will be hardly any artistic activity throughout 2020/21 as to present anything like a normal range of events and social distancing measurements would limit ticket revenue.

What’s next for London’s museums, theatres and galleries?

The Society of London Theatre, which is responsibile for West End shows such as Les Miserables, has cancelled all shows until the end of June – but that could be extended.

A statement from SOLT said: ‘This does not mean theatres will reopen on 29 June; if further cancellations are necessary they will continue to be announced on a rolling basis. Different theatres and productions are likely to reopen at different times.’

Before the Covid-19 lockdown, around 300,000 people would attend West End shows a week.

Large art galleries and museums such as the Tate Modern anticipate they could open by the start of July, as they will have greater room to allow for social distancing.

Most of London’s galleries are warning visitors they are closed until further notice, awaiting the go-ahead from the government.

Jonathan Reekie, director of Somerset House, told Time Out: ‘Like everyone else, we’re monitoring the situation day by day and following all government guidance, which currently states that Somerset House will not be able to reopen to the public until July 4 at the absolute earliest.’

The Southbank Centre is made up of the Royal Festival Hall, the Queen Elizabeth Hall, the Purcell Room and the Hayward Gallery and offers more than 3,500 events a year.

It is also home to the National Poetry Library, the Arts Council Collection and eight orchestras including the London Philharmonic and the BBC Concert Orchestra.

Its annual ACE grant represents just 37% of its income and it has replaced declining public funding with earned income from ticket sales, bars, restaurants and other commercial activity, but the mandatory closure of the venues, bars and restaurants has led to the immediate loss of 60% of its income.

It is calling on the Government to extend the furlough scheme beyond October for the cultural sector, develop a “large-scale intervention” to support the arts sector as it navigates the crisis, and support self-employed artists and musicians who do not qualify for current financial support schemes.

The venue is already planning to cancel events from September to November and considering the option of broadcasting concerts from behind closed doors through autumn and next spring.

‘We know we are not alone in this and stand with our friends, partners and colleagues – both here in the UK and abroad – during this time of unprecedented challenge.

‘With eight orchestras, the National Poetry Library, and Arts Council Collection all calling us home, and playing host to over 4.45 million visitors each year, we’re doing all we can to safeguard the Southbank Centre we currently know and love for the years ahead.

‘However, this crisis has hit hard, and we join a number of other organisations and venues in sounding the alarm about the long-term health of UK arts and culture.

‘The Southbank Centre’s own history is traced directly to the 1951 Festival of Britain. Here, the post-war government recognised how vital arts and culture were to the health and well-being of a traumatised nation.

‘Just as the South Bank was a focal point of social and economic recovery then, we hope that we’ll emerge from this crisis to an even brighter future, throwing our doors wide open once more.’

The zoo has already furloughed 280 staff after closing to the public, but is facing £2.3million monthly running costs to keep its animals fed and the grounds maintained.

Dominic Jermey, director general of the Zoological Society of London (ZSL), has warned that, despite the remainder of workers also agreeing a 20 per cent pay cut, its reserves will soon run out.