Malaysia's election campaign kicks off amid claims of sabotage, bias

Kuala Lumpur:  Campaigning for Malaysia's general election on May 9 has begun,  pitting Prime Minister Najib Razak against his former mentor Mahathir Mohamad in a contest marred by claims of sabotage and a skewed electoral system.

Najib leads his undefeated ruling coalition into arguably its toughest election since independence from Britain in 1957. He is grappling with a multibillion-dollar scandal at a state fund, public anger over living costs and an unprecedented challenge by the 92-year-old Mahathir. 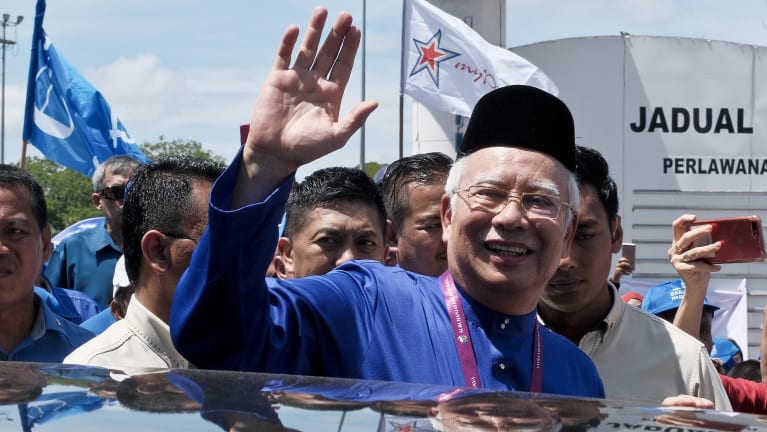 Malaysian Prime Minister Najib Razak waves to his supporters after his election nomination in Pekan, Pahang state, on Saturday.

Mahathir, returning to politics after retiring 15 years ago, will stand in the holiday island of Langkawi. Prime minister for 22 years before stepping down in 2003, Mahathir returned to challenge Najib after a billion-dollar scandal at state investment fund 1Malaysia Development Berhad (1MDB).

The fund is being investigated for money-laundering and graft in at least six countries, including the United States, Singapore and Switzerland. Najib denies any wrongdoing in connection with losses at the fund.

He has also defended his government's economic record despite public discontent over rising prices, blamed on a consumption tax he introduced in 2015. 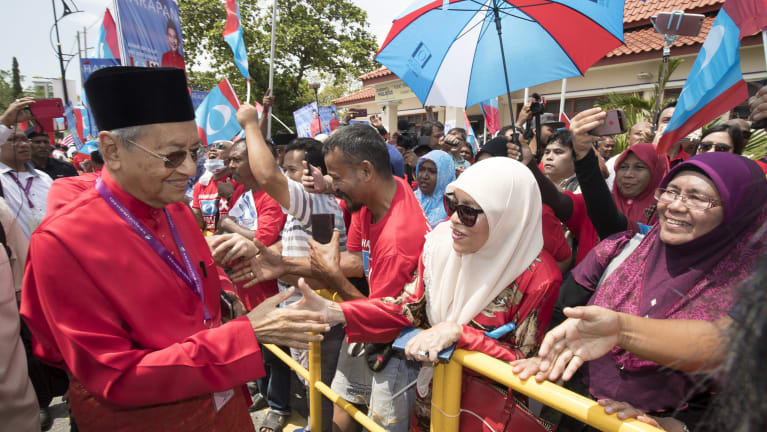 Former Malaysian strongman Mahathir Mohamad shakes hands with his supporters after his nomination outside the nomination centre in Langkawi on Saturday.

Najib will contest the election from his home state of Pahang. His Barisan Nasional (BN) alliance and the opposition are vying for 222 parliamentary and 505 state seats.

Election Commission Chairman Mohd Hashim Abdullah told a news conference that 85 per cent voter turnout was expected on polling day, despite it being a weekday.

"Don't worry. We set the date and the turnout target because we expect they will come out," Mohd Hashim told the news conference, which was broadcast live.

A Wednesday polling day was seen as potentially discouraging millions of Malaysians living abroad from voting. However, outraged Malaysians took to social media to offer funding and other services to help people return home to vote.

The opposition and critics say they face an electoral system that favours the BN coalition, compounded by a redrawing of electoral boundaries that was fast-tracked in parliament in March.

Najib's government and the Election Commission have denied the accusations.

The nomination of at least two opposition party candidates was rejected by the commission on Saturday. Senior People's Justice Party leader Tian Chua was rejected due to a previous conviction, while another candidate's documents were incomplete, Malaysian media reported.

Other claims, such as discrepancies in the electoral roll, have also been reported.

The Election Commission rejected a request this week by Malaysia's national human rights body to monitor the election, declaring that it had already appointed foreign observers and independent groups.