London: Malcolm Turnbull has accused Prime Minister Scott Morrison of "misleading" Australians over climate change and the summer bushfire disaster, in a dramatic worsening of simmering tensions between both men.

"I don't know why Scott Morrison has acted the way he has, to be frank with you. I worked with him very closely, I've known him for 20 years and I can't explain his conduct," the former prime minister told the BBC. 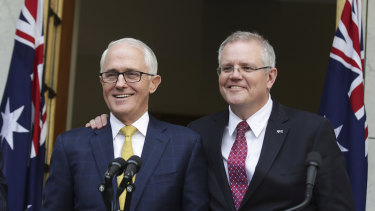 Malcolm Turnbull and Scott Morrison worked closely as prime minister and treasurer but have fallen out since the 2018 leadership switch. Credit:Alex Ellinghausen

"If a country like Australia is not prepared to grapple with this issue seriously – itself being in the frontline of the consequences, and being an advanced, prosperous, technologically sophisticated country with the means to do so – why would other countries take the issue as seriously as they should?"

Climate change contributed to Mr Turnbull's loss of the Liberal Party leadership in 2009 and then his prime ministership in 2018. His proposed National Energy Guarantee was abandoned by the Coalition following the botched leadership challenge by Home Affairs Minister Peter Dutton that eventually installed Mr Morrison in The Lodge. Mr Turnbull has since advocated for the NEG to be reintroduced as government policy.

The Coalition is bracing for the release of Mr Turnbull's new book, A Bigger Picture, in April. The book is expected to reveal new details about the 2018 leadership coup and could be critical of Mr Morrison's role in the turmoil.

The Prime Minister has acknowledged his holiday to Hawaii during the fire emergency was a mistake and has since ordered a major federal response to the disaster, including a military deployment to affected communities and a $2 billion recovery package.

But he has so far resisted calls to lift Australia's pledge under the Paris climate accord to reduce emissions by 26-28 per cent on 2005 levels by 2030. Australia plans to use 'carry over credits' earned by exceeding its goals under the earlier Kyoto agreement to meet its Paris obligations.

Mr Turnbull has pointed to the British government as a model for a conservative political approach to climate change. Prime Minister Boris Johnson plans to make the United Kingdom carbon neutral by 2050 and is very critical of the impact of coal on the environment.

Mr Morrison accepts the link between climate change and extreme weather events but has said it can not be blamed for the summer bushfire crisis.

Mr Turnbull said it was not possible "attribute any particular event, whether it's a flood or fire or a drought or a storm, to climate change" after a destructive bushfire hit the NSW south coast town of Tathra in 2018.

Malcolm, PMS, re, slams, Turnbull
You may also like: