Holidaymaker, 37, avoids jail after calling Manchester Airport staff ‘c****’ and threatening to punch police officer when he was barred from 11am Jet2 flight because he was so drunk he could barely stand

A British holidaymaker has avoided jail after calling Manchester Airport staff ‘c****’ and threatening to punch a police officer because he was barred from an 11am Jet2 flight for being drunk.

John Clark, 37, became aggressive and called Jet2 staff ‘c****’ and ‘p****’ when he was stopped from boarding a flight for being so drunk he could barely stand.

Clark had travelled more than 100 miles from his home in Hull for the morning flight to Dalaman on August 29. He apologised at Manchester magistrates for his behaviour.

During his tirade Clark, who had been drinking Stella Artois, told one male crew member: ‘You look about 10 years old’. 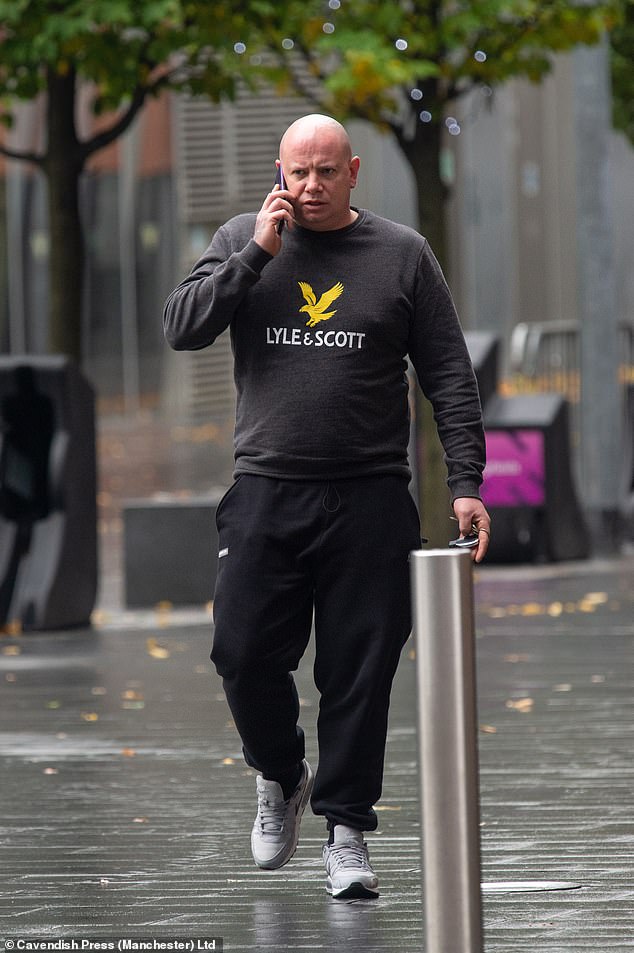 John Clark (pictured outside court), 37, became aggressive and called Jet2 staff ‘c****’ and ‘p****’ when he was stopped from boarding a flight for being so drunk he could barely stand

When told his partner was fit to fly Clark added: ‘Are you stupid? do you think she’s going to travel without me?’.

As fellow holidaymakers, including children, looked on he called a female Jet 2 crew member a ‘c***.’

Police arrived and confirmed Clark would not be flying but he said: ‘What the f*ck? I was going to – I will write you off.’

He was eventually arrested and escorted back through passport control after one of the officers drew his taser when Clark threatened to punch him.

Clark, who works for a plant machinery company, told the court he had been grieving because of ‘things that were going on in his life.’

But in a statement Jet2 worker Ryan Walker said: ‘He made me feel tense and in a position I could not get out of. I was surprised at the man’s behaviour, how he changed so quickly and how aggressive he was.

‘He acted like that when children were present and I hope I never end up in that position ever again.’ 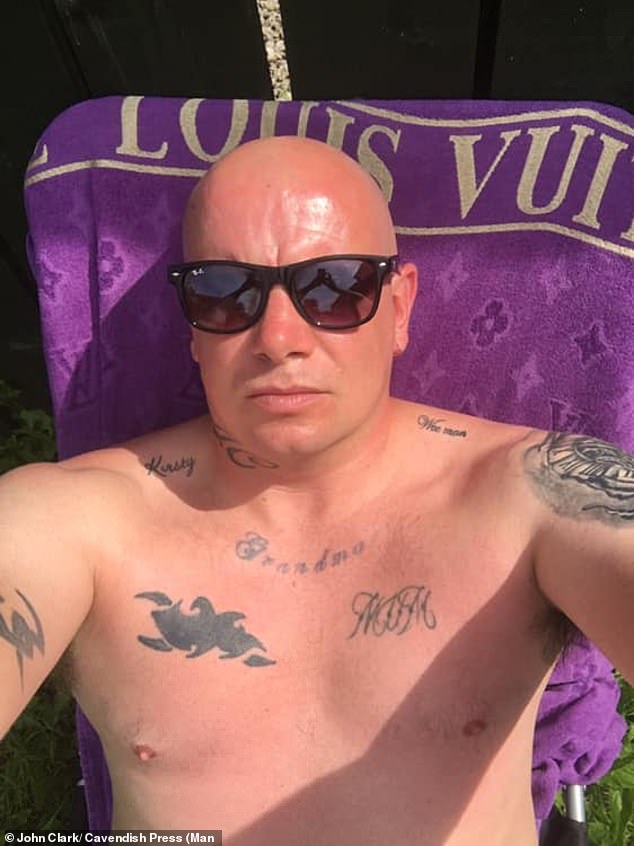 Clark (pictured on holiday), who works for a plant machinery company, told the court he had been grieving over ‘things that were going on in his life’

Prosecutor Paul Sumner said Clark bumped in to the gate doors as he tried to board his flight half an hour before take-off.

He said staff ‘thought this was strange and assumed it was an accident’ before pulling him to one side to ask if he had been drinking.

‘She continued to speak to him but he was swinging around, being unsteady and struggling to stand,’ he added.

‘She explained that he was not fit to fly because he had been drinking but at that point the defendant became aggressive and said he had done nothing wrong. He swore at her and became louder while other travellers looked on.’ 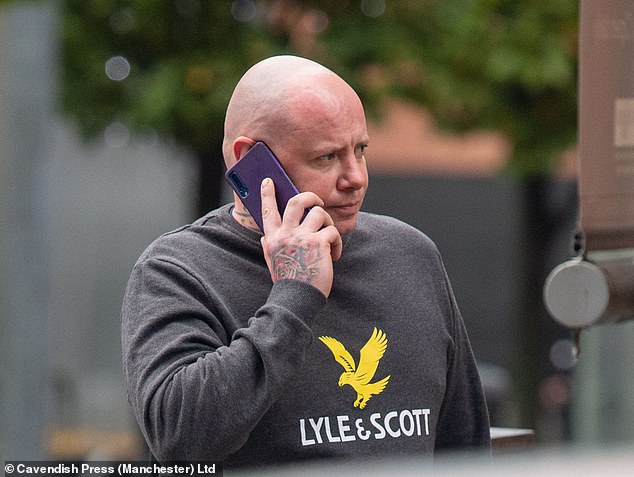 Clark had travelled more than 100 miles from his home in Hull for the morning flight to Dalaman on August 29. He apologised at Manchester magistrates for his behaviour

Clark and his girlfriend left the gate before returning 15 minutes later with another passenger who said they could vouch for the defendant that he should be allowed to fly.

But it was too late to board. When told he would not be flying Clark ‘became aggressive’ and called a staff member a ‘p****’.

Mr Sumner added: ‘He was told to calm down again and wait in the seating area but his behaviour while there was unpredictable and volatile.’

Police were called and an officer confirmed the defendant would not be able to fly.

Clark said ‘what the f*ck?’ and ‘I will write you off’ before continuing to swear and telling the officer to ‘f*ck off.’

‘He was slurring his words while talking and rolling his shoulders, and the officer tried to reason with him but he continued to be aggressive,’ Mr Sumner said. 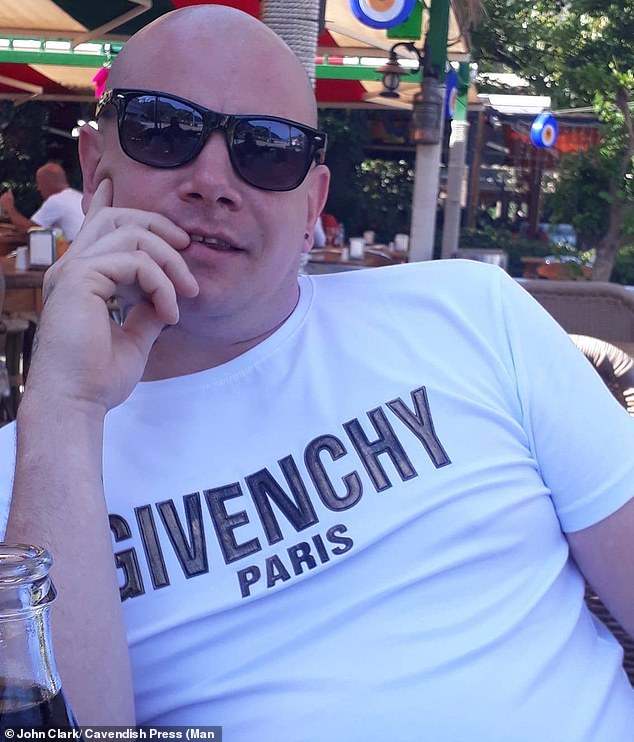 During his tirade Clark, who had been drinking Stella Artois, told one male crew member: ‘You look about 10 years old’

‘He then pointed at Naomi Sweet and called her a ‘c**t’ and threatened to punch the PC who opened his taser but it was not used. The defendant was then taken back through passport control and arrested.’

Clark admitted using threatening behaviour and was ordered to pay £50 in compensation to each of the two crew members and the PC.

He was also ordered to complete a 12-month community order plus 200 hours of unpaid work.

In mitigation defence lawyer William Southcott said: ‘He is extremely ashamed and embarrassed. He wishes to apologise and will accept any sentence the court passes and wants to put this behind him.’

Sentencing District Judge Bernard Begley told Clark: ‘If you had been sober and watching everything going on during that incident, you would have been appalled.

‘I appreciate there were things going on in your life immediately before this but alcohol and grief do not excuse what you did. I hope this is a one-off incident.’

after, avoids, Calling, jail, man
You may also like:

Michigan board certifies Biden win of state in presidential election