Man, 28, is fighting for life after a gunman forced his way into his home and shot victim ‘eight times’ in front of his terrified girlfriend

A man is fighting for his life after being gunned down in his Birmingham home in front of his terrified girlfriend.

The gunman forced his way into the 28-year-old man’s house on Friday evening, with neighbours describing that they heard eight shots fired in what they thought were fireworks.

Police are desperately hunting the shooter who fled the scene and remains on the run.

A black BMW car was bullet holes that had ripped through its door was seen outside the home today, as a heavy police presence manned the area on Downsfield Road, Sheldon.

Forensic teams dressed in white suits and face masks conducted investigations including as they searched for scraps of evidence. 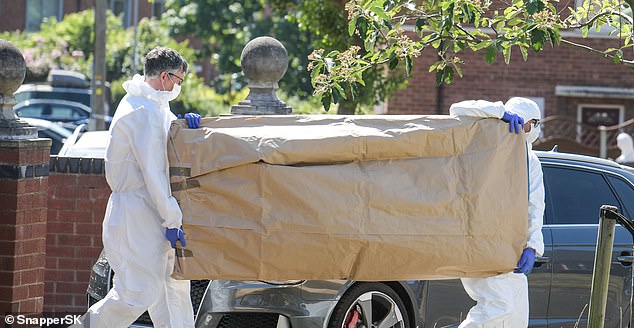 ‘I didn’t realise what it was at first – I thought it was fireworks. Then the police arrived and the paramedics.

‘There were three people outside the house crying. I heard one of them say ‘he has been shot’.

Another witness told BirminghamLive they heard a car screech in the road before what sounded like a car backfiring.

Armed police were scrambled to the scene of the shooting at 10.30pm last night.

The injured man was rushed to hospital and West Midlands police said the victim was in a ‘critical but stable’ condition.

A spokesman said: ‘The investigation is at an early stage, but detectives have recovered CCTV from the area and are following up a number of lines of enquiry.

‘Extra patrols are being carried out in the area today to reassure residents.’

Officers were today seen peering under a number cars and scouring driveways, pavements and gardens as they hunted for evidence and conducted extensive fingertip searches.

after, fighting, for, Gu, Life), man
You may also like: