Man who ‘killed teens, threw bodies down mine shaft’ appears in court

‘Nazi’ who ‘forced 17-year-old girl to kneel and watch as he stabbed her boyfriend to death, then slit her throat and threw their bodies down a mine shaft’ appears in court with his SWASTIKA tattoos on full display

Nearly four months after police say a 41-year-old Utah man murdered a teenage couple in cold blood and tossed their bodies down a mineshaft, the suspect finally made his first court appearance.

Jerrod Baum on Thursday was led into the 4th District Court in Provo with handcuffs restraining his wrists, sporting a bushy, graying beard and a large swastika tattoo visible on his exposed chest.

A second, smaller swastika carved near his right eye peeked out from behind a curtain of strawberry-blond hair.

Baum is accused of kidnapping Brelynne ‘Breezy’ Otteson, 17, and Riley Powell, 18, on December 30, 2017, and bringing them to the Utah desert after catching the young couple smoking marijuana with his girlfriend, 34-year-old Morgan Reannon Henderson. 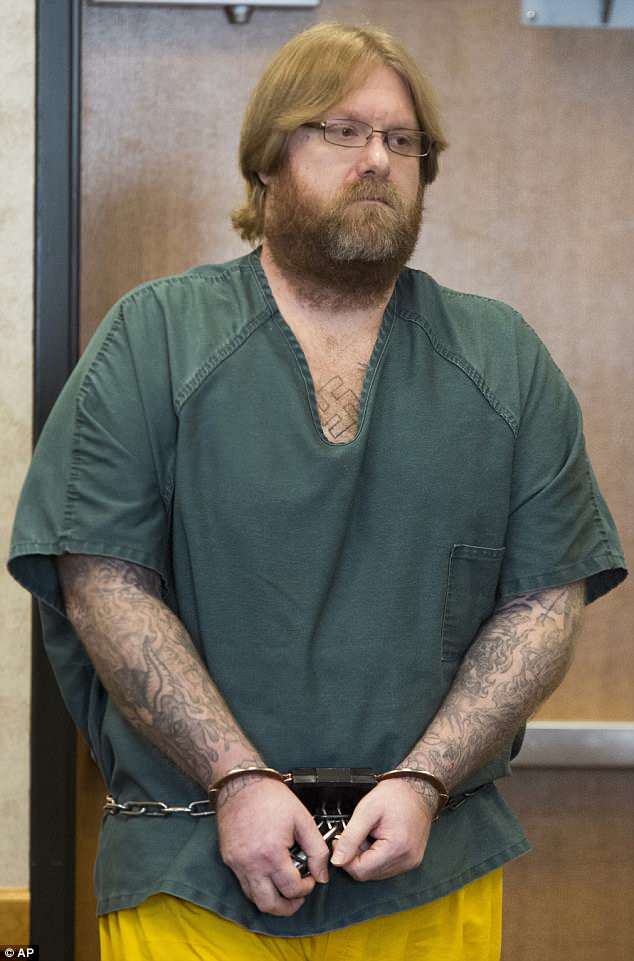 Nazi symbols: Jerrod Baum, a suspect in a double homicide in Utah, put his swastikas on full display during his first court appearance on Thursday. He has one on his chest and his temple 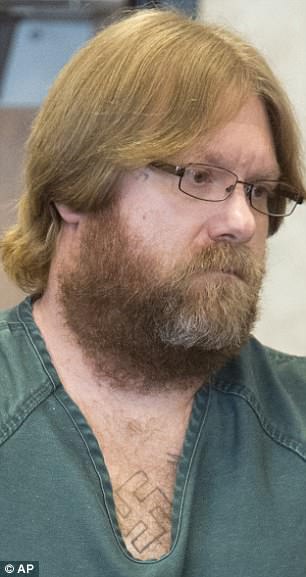 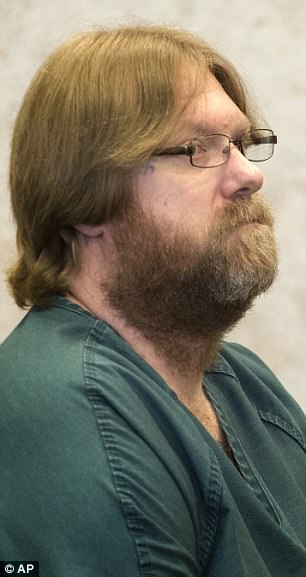 Baum was expected to waive his preliminary hearing on Thursday, but it was continued until August 1 to give lawyers more time to prepare

According to court documents, he tied up Otteson and made her watch as he beat and stabbed her boyfriend to death.

Baum then allegedly slashed her throat and disposed of both bodies by tossing them 100 feet down the Tintic Standard Mine No. 2 near Eureka.

The victims’ remains were not recovered unit March 28, after Henderson told police what had happened and led them to the abandoned mine shaft.

Baum is facing aggravated murder, kidnapping and other charges that could bring the death penalty, while Henderson is charged with obstruction of justice.

Baum was expected to waive his preliminary hearing on Thursday, but it was continued until August 1 in order to allow the prosecution and defense additional time to review all of the evidence in the case. 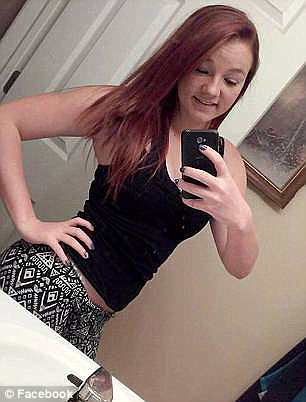 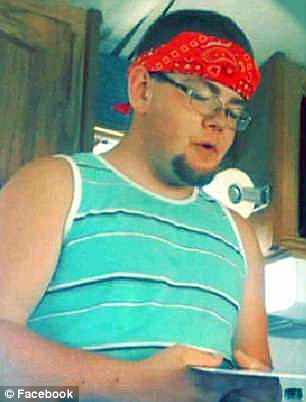 Victims: Police say he tied up Brelynne ‘Breezy’ Otteson (left), 17, and made her watch as he stabbed her boyfriend, Riley Powell (right), 18, to death, then slit the girl’s throat 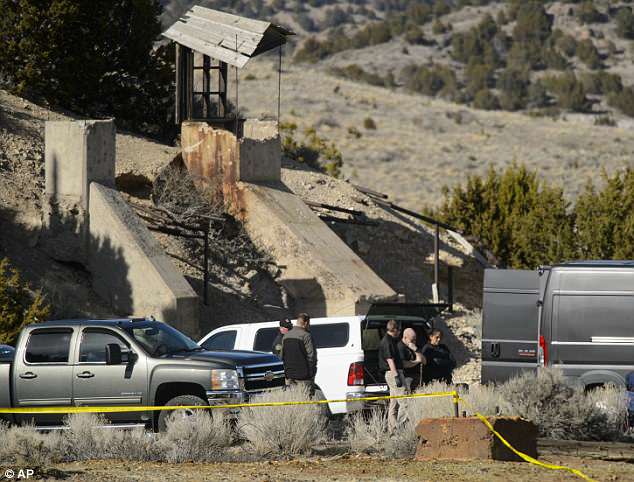 In late March, nearly three months later, the couple’s remains were recovered from  an abandoned mine in Utah’s west desert near Eureka (pictured)

Both sides also are still waiting for the medical examiner’s final autopsy report, which could be released within a couple of weeks.

For Otteson and Powell’s loved ones, who came from far and wide to the courthouse this morning to confront Baum for the first time, the takeaway from the brief hearing was that it could take years to bring the case to trial.

Prosecutor Chad Grunander explained that because the case revolves around a double homicide, and is potential a death penalty case, the legal process will be slow and deliberate.

But the families of both victims said they are not discouraged by the sluggish pace of justice and are not interested in a plea deal being offered to Baum, reported KSL.com.

‘We knew it was going to be long and drawn out; we knew that it wasn’t going to be quick and fast. Unfortunately that’s how it goes,’ Otteson’s aunt, Amanda Hunt, told the Daily Herald. 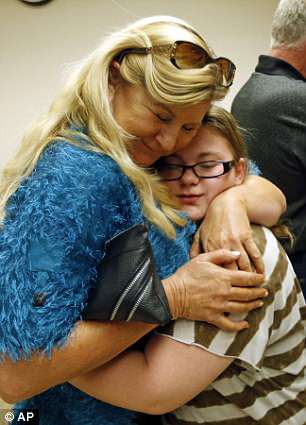 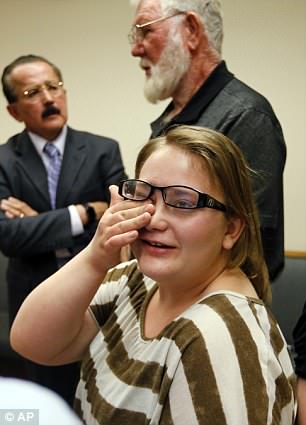 Nikka Powell, center, the sister of Riley Powell, receives a hug from a family member Thursday 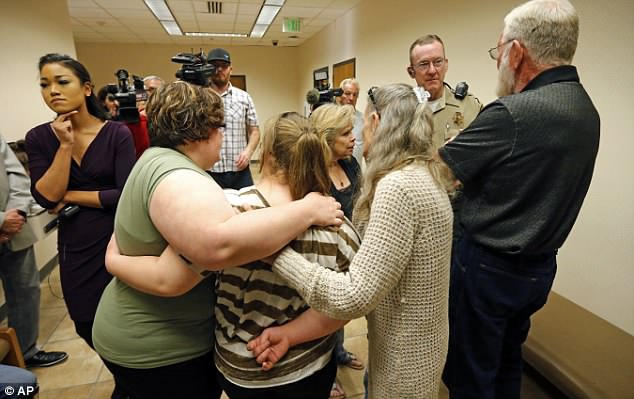 Powell’s sister, Nikki, said that Baum, whom she called a ‘monster’, deserves nothing less than the death penalty.

It will be up to the Utah County Attorney’s Office to decide whether or not to seek the death penalty for Baum, but the wishes of the victims’ families will be taken into account.

Police say Baum killed the couple after they visited his girlfriend despite Baum’s warning against her having male visitors.

Baum flew into a rage when he learned Henderson had been hanging out with Riley and Breezy, saying ‘it was too bad because he has never killed an innocent before,’ Henderson told authorities, according to police documents.

He then allegedly tied the tens up, put them in his Jeep and transported them to the old mine site in the west desert.

There, he allegedly forced Otteson watch as he beat and stabbed Riley to death before he cut her throat and dispose of the bodies.

Court records show Baum has a rap sheet dating back to the early 1990s including theft, assault and weapons charges.