Taking a shine! Man uses a torch to turn his bald head into a dazzling mirror

This is the incredible moment a man uses a torch to turn his bald head into a dazzling mirror.

In the video, which has been shared on YouTube, a bald man can be seen sat at a table in Dallas, Texas.

The cameraman introduces the stunt, telling viewers: ‘In today’s episode of ‘Who’s head is shinier?’

The bald man then replies: ‘Who? I wonder how reflective it is.’

He then proceeds to pull out a small torch from his back pocket and lowers his head in the direction of the camera.

As his friend says ‘it’s very f***ing reflective’, the bald man turns on the torch and shines it at his head to reveal a dazzling bright light reflecting off his scalp.

The man’s skin is so reflective is bounces back the brilliant white light to the camera which is so bright it causes a glare affect on the camera’s lens. 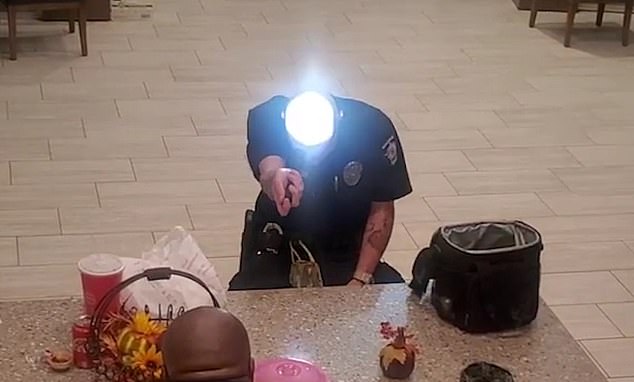 A man in Dallas, Texas, shows off just how reflective his head is using a bright white torch

The cameraman excitedly exclaims ‘Oh my god’ as the bald man smiles proudly at the amused reaction from his friends.

In the video’s description, the cameraman adds: ‘My friend has a very shiny bald head, but I didn’t realize it would reflect light this well.’