Crystal Reynolds Fisher, from Michigan, USA, told her boss at the PS Food Mart she couldn’t do her shift because her teenage boy had been rushed to hospital. 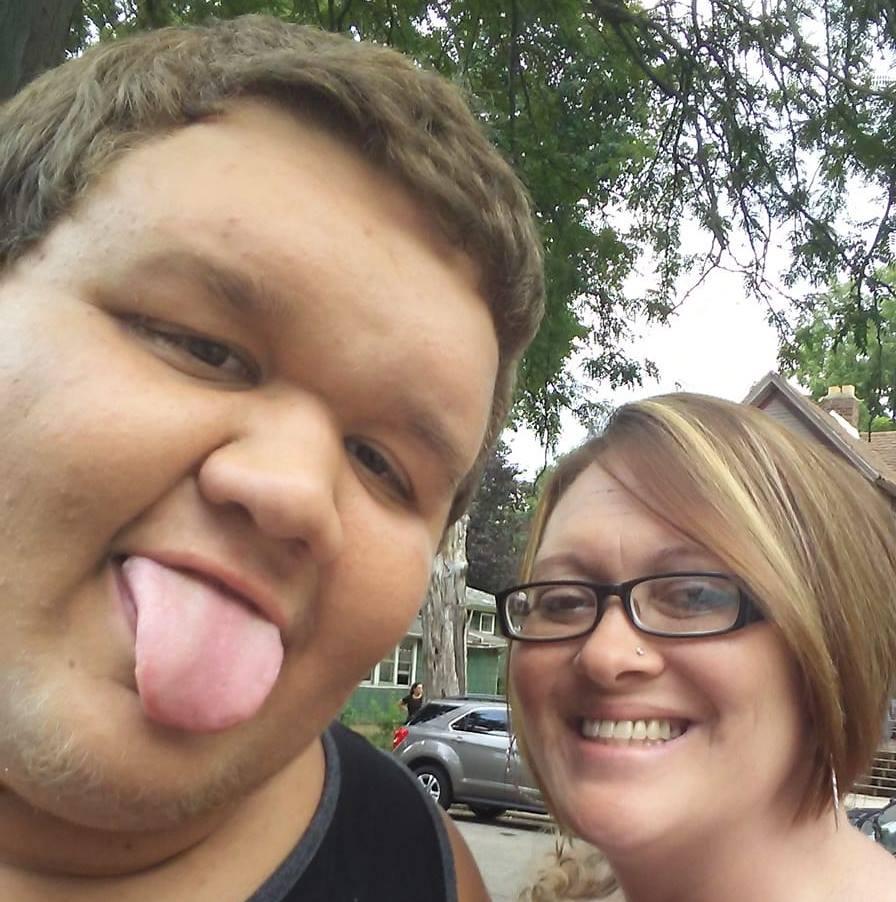 Her son Jason, 18, was placed on life support after developing what doctors believe is a form of sepsis – which is the body’s response to infection which can result in multiple organ failure.

When Crystal arrived at the hospital she faced a “rollercoaster of emotions”, reports WWMT.

She said:  “They wouldn’t let me in the room.

"I didn’t know what was going on, how my son was or nothing. Finally, a doctor came out and said they had to put him on life-support.”

The distraught mother decided to stay by her son’s side as he fought to stay alive. 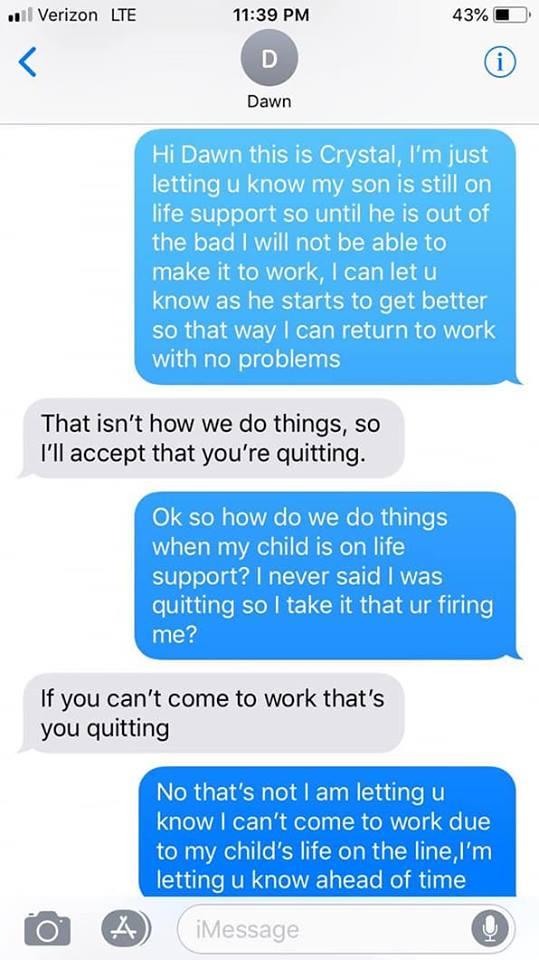 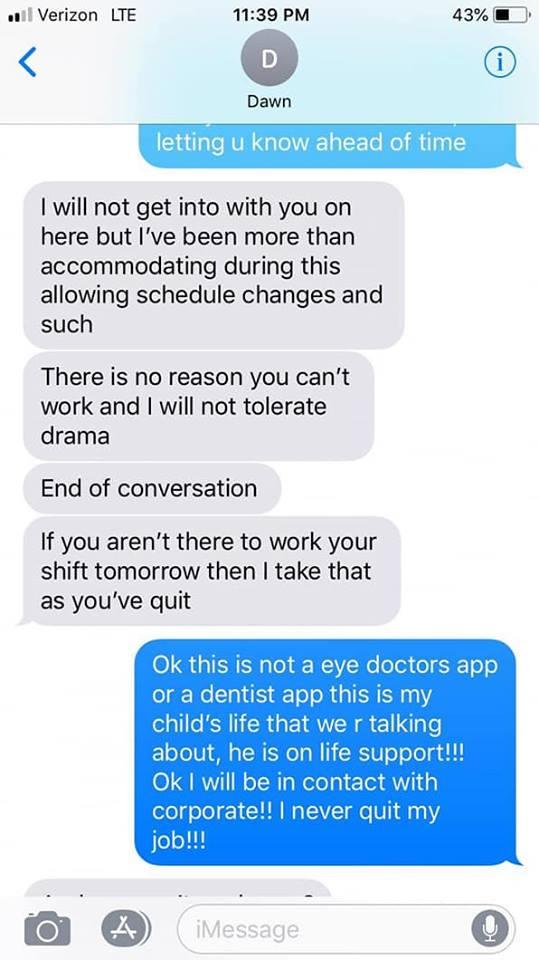 But when she messaged her manager Dawn replied, Crystal was shocked by her response.

She shared the texts on Facebook on July 1, which quickly went viral and have been shared over 72,000 times.

In her first text, Crystal wrote: “I'm just letting you know my son is still on life support so until he is out of the bad I will not be able to make it to work, I can let you know as he starts to get better so that way I can return to work with no problems."

"Finally, a doctor came out and said they had to put him on life-support.”

Her boss’ reply has left online users “shocked” and “disgusted.”

The manager wrote: “That isn't how we do things, so I'll accept that you're quitting.

"If you can't come to work that's you quitting.

"There is no reason you can't work and I will not tolerate drama.

“End of conversation. If you aren't there to work your shift tomorrow then I take that as you've quit." 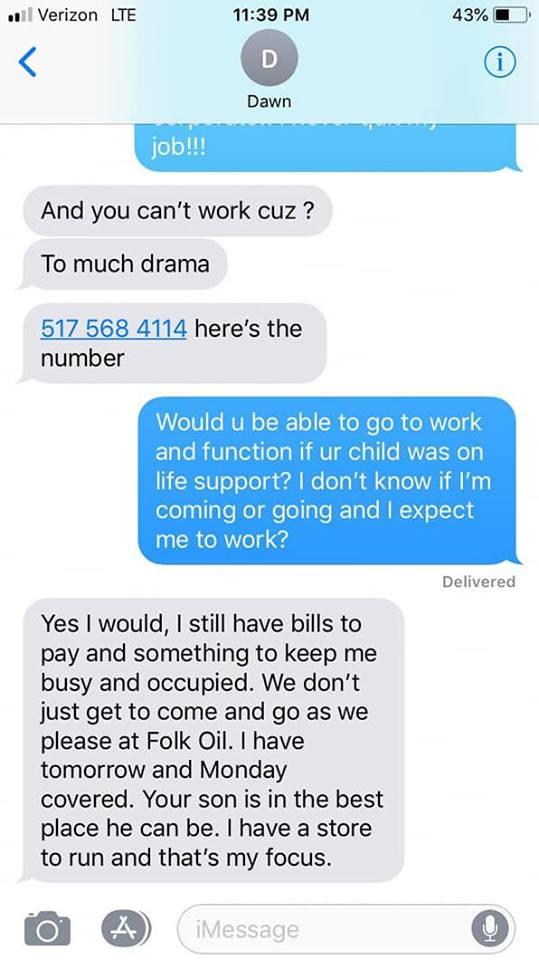 A devastated Crystal wrote: “This is not an eye doctor’s appointment or a dentist appointment, this is my child's life we are talking about.

“I never quit my job.

"Would you be able to go to work and function if your child was on life support?"

The boss then replied: "Yes I would, I still have bills to pay.

"We don't get to come and go as we please at Folk Oil.

"I have a store to run and that's my focus."

Folk Oil, which owns the shop, fired the manager the day after the texts were posted on Facebook and offered their support to Crystal.

"This is not an eye doctor’s appointment or a dentist appointment, this is my child's life we are talking about."

A statement read: “Today we were made aware of a situation at one of our locations where an employee was told that they could not get time off to care for a hospitalized child.

"PS Food Mart and Folk Oil Company are in complete agreement that this is not acceptable.

"We are investigating the situation and will make sure that it is resolved quickly and thoroughly.

"We have already been in contact with our employee and have communicated our support and assurance that she will be allowed any time off needed.

“We are sympathetic to anyone, especially our employees that have a loved one in the hospital."

In another statement it added: "We investigated and have found that the situation was handled improperly and without the compassion that we value as a company. For that, we are very sorry.

"As a result of this finding, we took quick action and that manager is no longer employed by PS Food Mart.

"We have also reaffirmed to our employee that she will be able to take all the time off that she needs during this difficult period."

It is unclear what condition Crystal's son Jason is currently in.