THIS map shows how countries with compulsory BCG vaccination programmes have seemingly escaped the worst of the coronavirus crisis.

Seven countries in the western Balkans – with a total population of 22 million – have reported just 21,145 confirmed cases and 775 deaths. 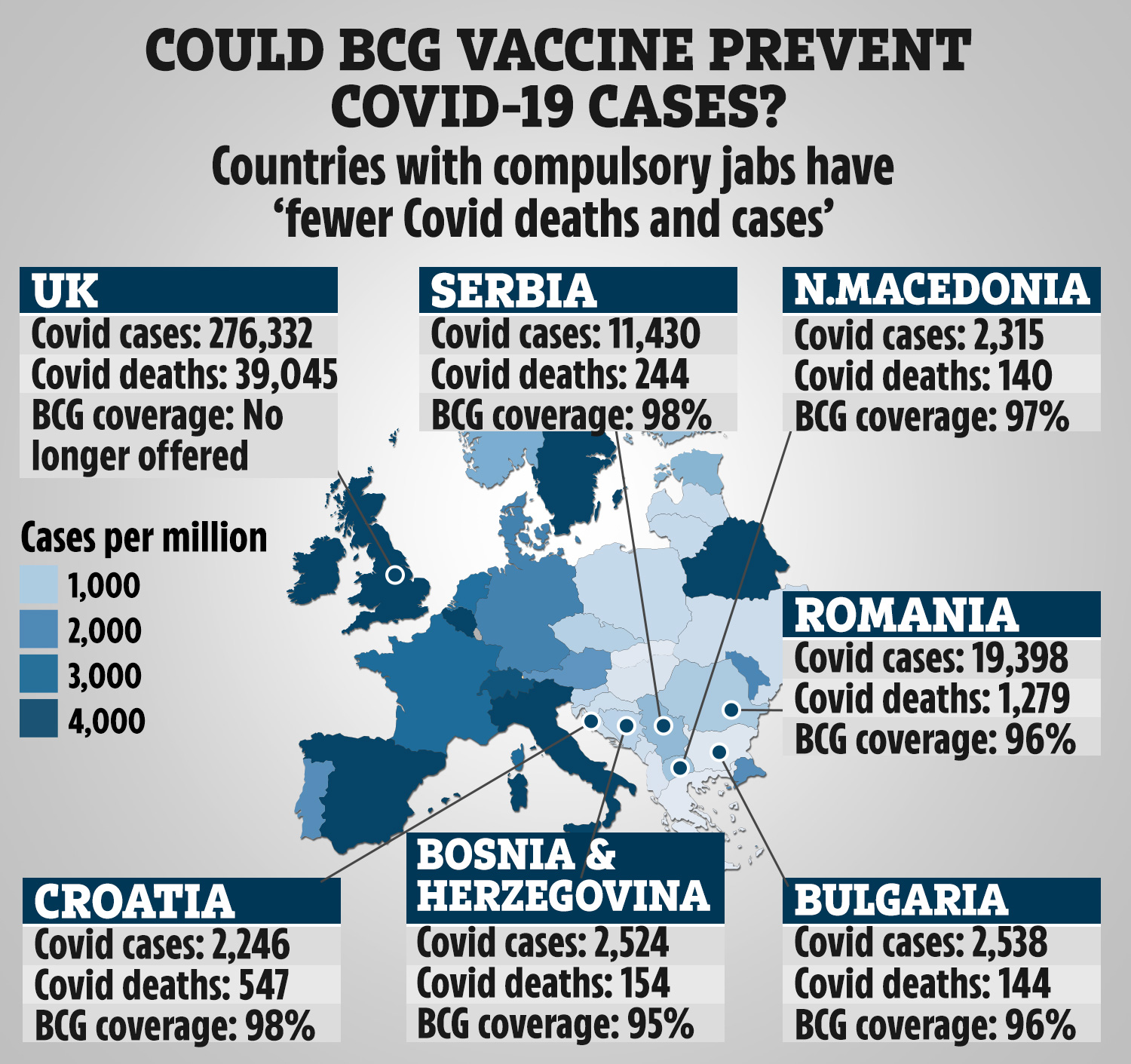 That's despite their close proximity to Italy – once Europe's Covid epicentre – and having more complicated and outdated healthcare systems.

But experts have noted these countries also have universal mandatory Bacillus Calmette-Guérin (BCG) vaccinations – something that the UK scrapped in 2005.

The jab was developed almost a century ago to increase immunity to the bacterial lung infection tuberculosis.

Scientists have long said that the vaccine – which costs as little as £30 per dose – also appears to trigger an immune response to other infectious diseases.

And amid the outbreak of Covid-19, they began to wonder whether it could offer any protection against the new bug.

Now experts claim to have found a link between countries that have mandatory BCG vaccinations and fewer deaths and cases of coronavirus.

Predrag Kon, Serbia's state epidemiologist, told The Times: "This is something that we have seen happening – that people who have received the BCG experience a form [of Covid-19] that is easier.

"These are just impressions, there is still not enough evidence to know for sure.

"But it does seem that the countries with universal BCG vaccinations have had an easier experience."

Many European countries made the BCG vaccine mandatory in the early 1950s, with pupils aged between ten and 14 given a shot every year.

But the UK – along with most of western Europe – ditched mass vaccination in the 2000s.

Instead, those who were considered most at risk – including babies or children who live with infected relatives – were targeted.

The jab was never given universally in Italy or the US but is still routinely administered in eastern Europe, most of Africa, Asia and South America.

How countries with compulsory BCG vaccinations have been affected by coronavirus

These are the number of cases and deaths from coronavirus in the western Balkan countries where BCG vaccination programmes are mandatory.

It also shows the percentage of people who have had the jab.

Compare that with the UK where compulsory BCG vaccinations were stopped in 2005.

The most recent figures show that the number of coronavirus cases has hit 276,332 while the death toll stands at 39,045.

But researchers believe that it may protect against respiratory diseases other than tuberculosis.

As SARS-CoV-2 – the virus that causes Covid-19 – is a respiratory infection, experts were curious as to whether the BCG vaccine could offer any protection.

A preliminary study,  posted on medRxiv – a site for unpublished medical research, has found a link between countries where the jab was compulsory and fewer Covid cases.

While it's only a correlation, clinicians in at least six countries have started running trials which involve giving frontline health workers and elderly people the vaccine to see if it can provide some level of protection.

Gonzalo Otazu, assistant professor at the New York Institute of Technology, began research after noticing the low number of cases in Japan.

The country had reported some of the earliest confirmed cases of the bug outside of China – but hadn’t introduced lockdown measures.

He was aware of other studies showing the BCG jab had provided protection against other diseases, so his team started to look at different countries vaccination policies.

They then compared the number of confirmed cases and deaths from Covid-19 and say they found a strong correlation.

Among their findings, the team pointed out that countries with a high number of cases, such as the US and Italy, the BCG vaccine was only offered to those deemed at risk.

In the UK, Spain, France and Germany, the vaccine policies were ended decades ago.

Prof Otazu said that in China, where the pandemic began, has a BCG jab scheme but it wasn't well adhered to until 1976.

But both Japan and South Korea, where cases have remained relatively well-controlled, have compulsory BCG vaccination programmes in place.

Experts have cautioned the team's findings as they have not yet been peer-reviewed.

The World Health Organisation has also warned that there is no solid evidence to prove that the BCG vaccine protects against Covid-19.

Trials of the jab are ongoing in at least six countries including Australia, where some 4,000 health workers will be given the BCG vaccine as part of a six month trial.

Researchers at the Murdoch Children’s Research Institute in Melbourne said: “Although originally developed against tuberculosis, and still given to over 130 million babies annually for that purpose, BCG also boosts humans’ ‘frontline’ immunity, training it to respond to germs with greater intensity."

Some participating workers will be vaccinated against seasonal influenza and TB, while others receive the flu shot alone in order to set a baseline for comparison.

Researchers will take blood samples at the start and end of the trial to determine who contracted coronavirus, and participants will log any symptoms.

Midway through the trial, analysts will review the results for any indication that the TB vaccine is effective.

Similar research is underway in Denmark, Germany and the US.

It's also reported that a British trial is planned at Exeter University in Devon.

BCG, Co., How, map, reveals, vaccine
You may also like: