Cheated runner Jake was just two miles from the end and had been jogging for more than three hours when he was taken off the course, having lost his race number. 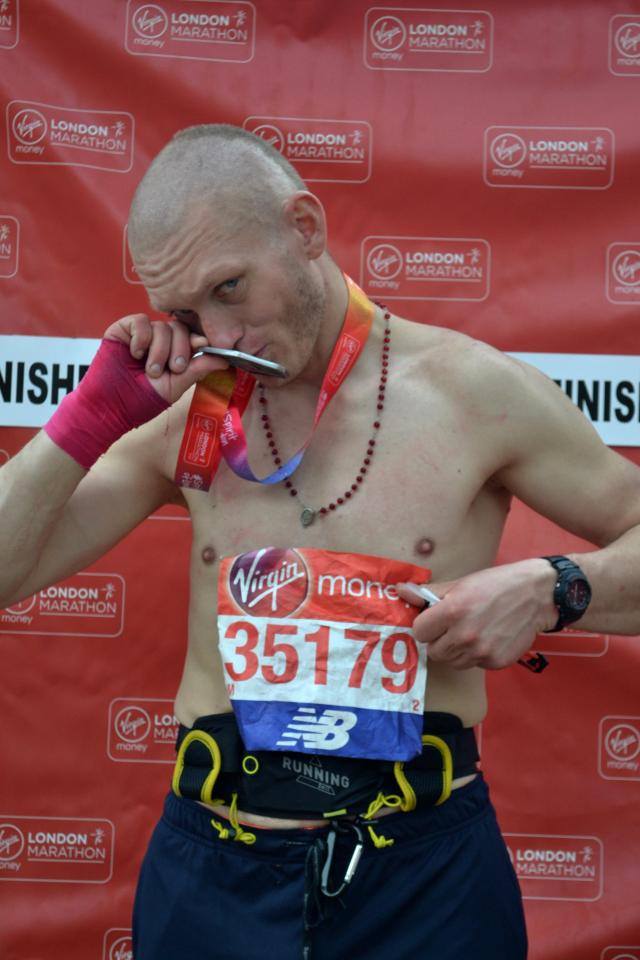 But to add insult to injury, the 28-year-old's lost race card was taken by another man, who then apparently swooped in to take his well-earned medal.

Photographs show Jake running the course with his race number – with Marathon photos then showing a completely different man posing shirtless with the number and medal.

The apparent imposter even kisses the medal as he poses with Jake's race number, 35179.

Dan Cartner – who was handing out champagne to exhausted runners at the finish line – told how the impostor stuck out as he wasn't sweaty and didn't appear out of breath. 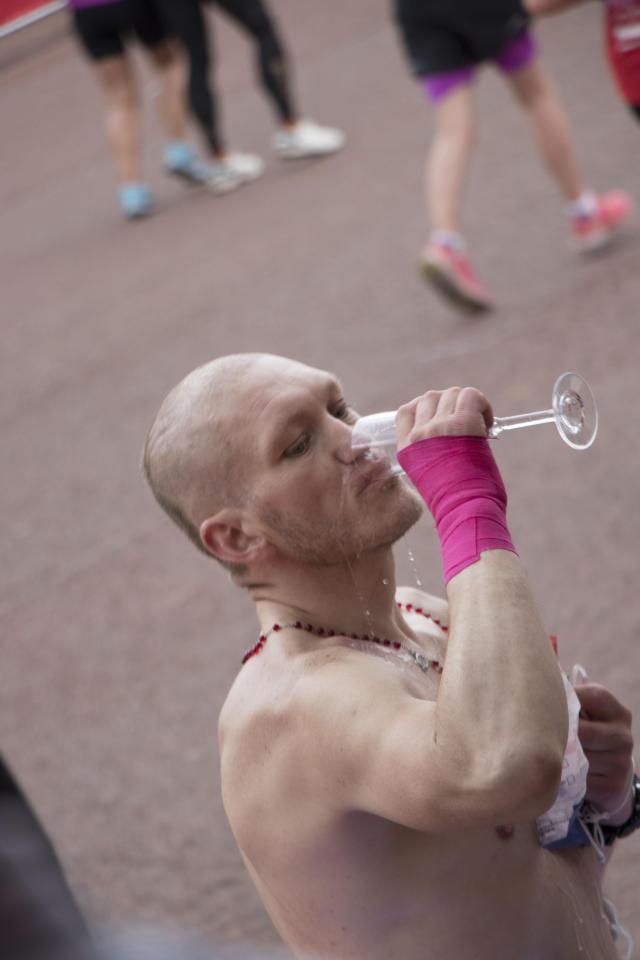 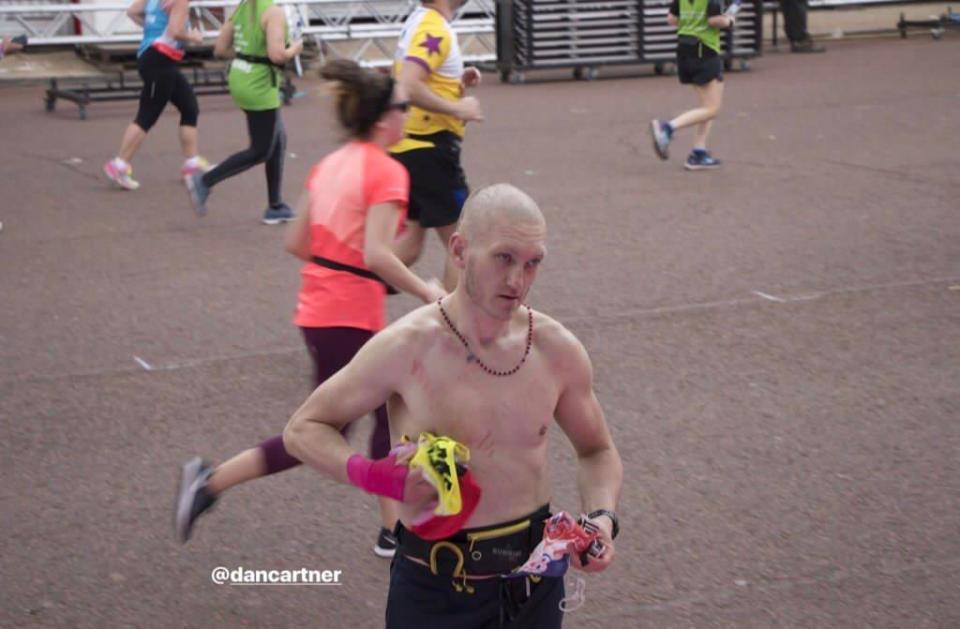 He said: "He ran down, ran over to our box and grabbed one of the champagne flutes that we were offering to runners.

"He gave us some strange looks, blew us a kiss and then just trotted on.

"I had my camera on me and had to grab a picture as he was so odd-looking. He was topless and didn't look like a runner type.

"He didn't look at all tired so I'd guess he just ran the final mile or two."

Officials are now investigating, with other runners calling for Jake – who raised more than £48,000 with pals for cancer research – to be given his well-deserved medal. 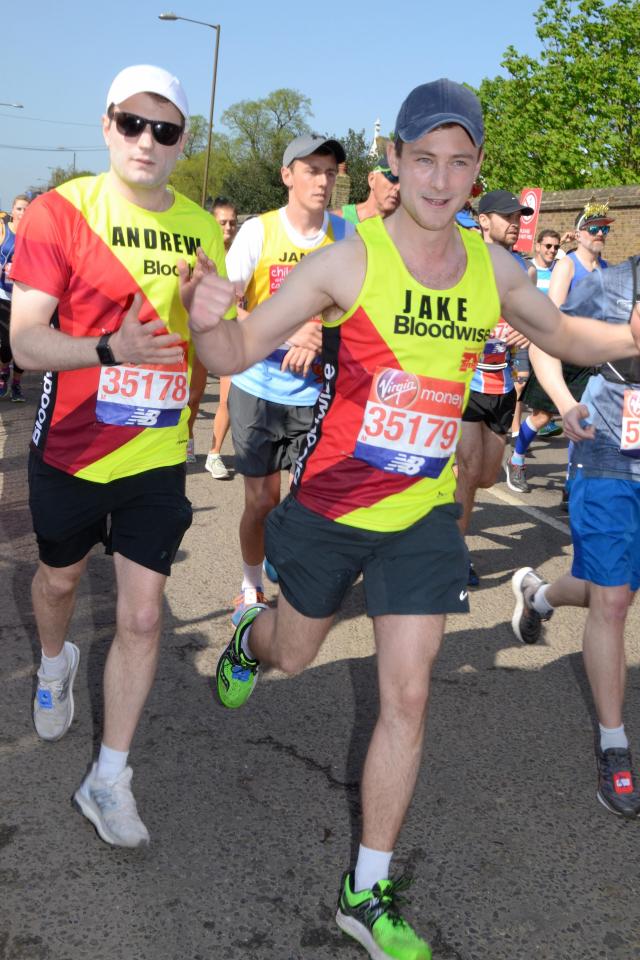 According to tracking results, Jake had started running at 10.30am, managing to reach the 40km mark in little over three hours.

However, his finish time was never recorded.

Peter Mowbray, who also ran the London Marathon, said he had been horrified when he heard what had happened to the young athlete.

The 51-year-old man, who completed the race with his wife Louise and daughter, posted about the debacle online, saying he felt "sick" at someone trying to claim a runner's glory. 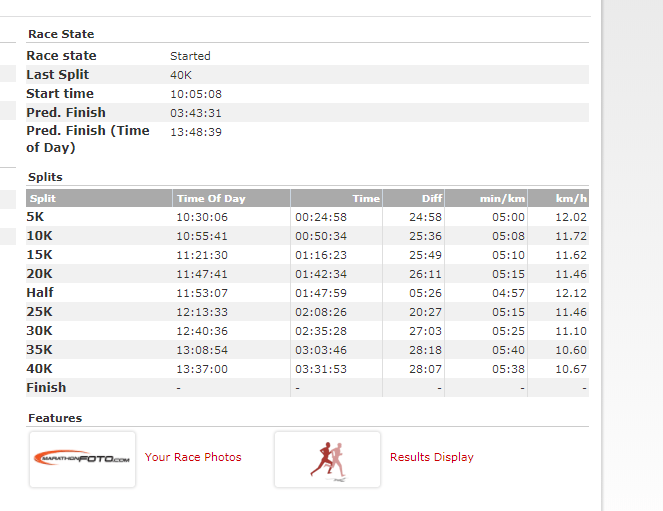 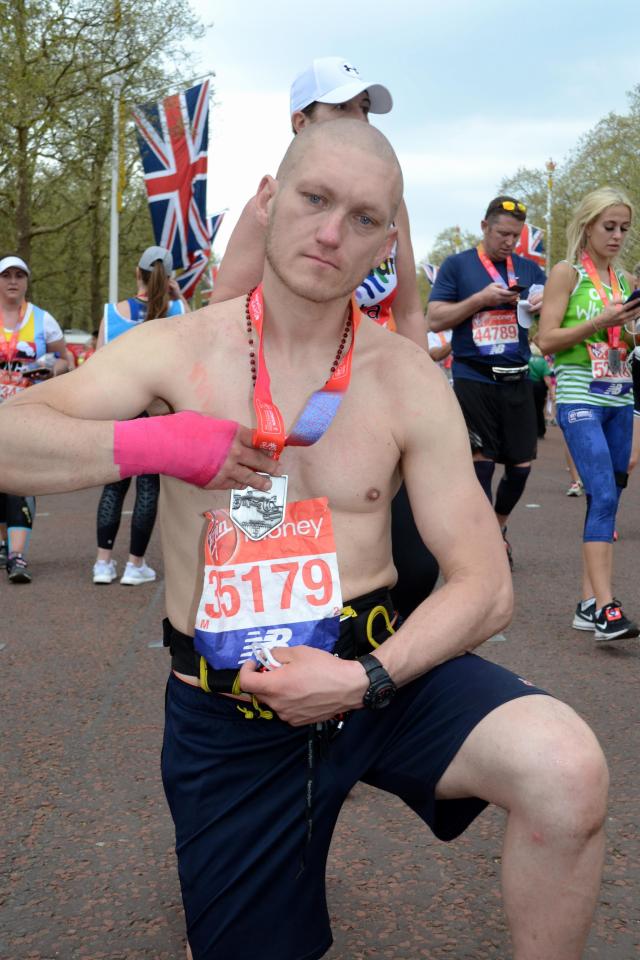 Speaking to the Sun Online, Mr Mowbray said: "I know how much effort goes into training for a marathon, so I was absolutely stunned to see this man with someone else's medal.

"It's heart-breaking to see."

He said he had heard about what happened through friends at the marathon, saying: "I hope the imposter will be named and shamed."

Jake told The Sun Online: "This is being handled through the proper channels."

He and friends had been raising money for Bloodwise, which works to fund research into all types of blood cancer.

A spokesperson for the London Marathon said: "I can confirm we are aware of this and a full investigation is in progress."

About 40,000 people took part in the race last weekend, including elite athletes and everyday people.

To apply for the 2019 Marathon, ballots are likely to open in early May.