We had to tell our children Daddy could die on Everest… we had to tell him the truth. Marina Fogle reveals the pain (and joy) of being left behind while her husband follows his dreams 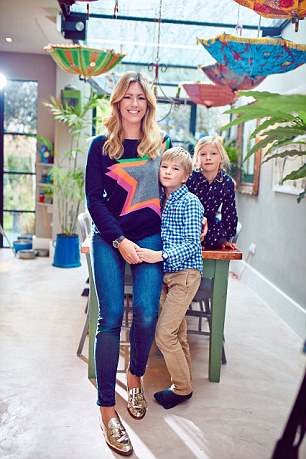 Marina Fogle, pictured, had to explain to her son Ludo, pictured with sister Iona, that their father might not make it home from Everest

May is generally one of my favourite times of year. Spring has sprung, the cold wind of winter is behind us and birdsong usually wakes me before my alarm. But I’ve been dreading this spring because I have known for the past year that by the time the bluebells are out, my husband Ben will be on his mission to climb Mount Everest.

He has spent three weeks preparing to tackle the world’s highest mountain. After an eight-day trek, he reached Base Camp, from where he started his rotations, where climbers ascend part of the mountain before coming back down again.

As I talked to him via Skype last week, he spoke slowly, his breathing was laboured and, in spite of the thick layers protecting him from the minus 20 degree air temperature, I could see how much weight had fallen off him.

On Friday I woke to the shock news that Ben’s climbing partner – former Olympic cyclist Victoria Pendleton – had made the difficult but brave decision to end her summit attempt. This is a woman whose European, world and Olympic gold medals are proof that she can push herself in a way that few others can. She had not managed to acclimatise, and during one of their rotations, her oxygen saturation levels had reached critical levels.

Due to the fact that more than 6,000 people reached the summit of Everest last year, there is an assumption that it’s easy, that given the right guide and a wad of cash, anyone can do it. Not true.

Since I was a teenager I have been fascinated by the world’s highest mountain. My favourite book was Jon Krakauer’s Into Thin Air, a harrowing account of the night eight Everest climbers perished during a storm. 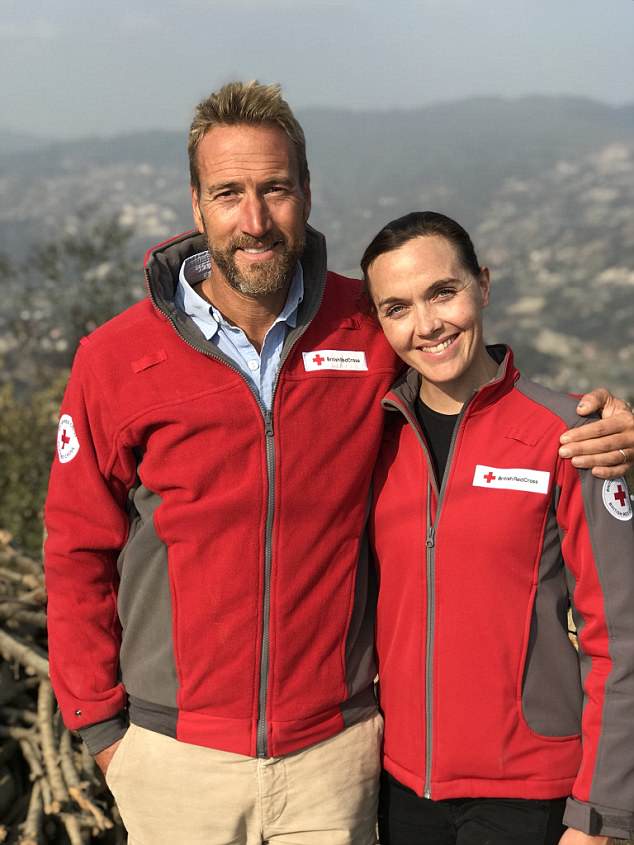 Ben Fogle was planning to summit Everest along with former Olympic champion Victoria Pendleton, although she had to pull out because of worrying oxygen levels

I was transfixed by the excitement, the peril and the endeavour, the heroics and the selfishness that take over when life is on the edge. I read every mountaineering book I could lay my hands on. While my friends idolised Take That, my heroes were Edmund Hillary, Reinhold Messner and Chris Bonington. I was hatching plans to climb myself.

That was probably why, when I met a blond man walking his dog in London’s Hyde Park a few years later and heard he was planning to run the Marathon des Sables – a 155-mile race across the Sahara in six days – it was pretty much love at first sight.

Ben seduced me with his passion for adventure. And when, a few days after rowing the Atlantic, he unsteadily got down on one knee and asked me to marry him, I agreed without hesitation. Ben Fogle, pictured, is currently training at base camp for an attempt on the summit 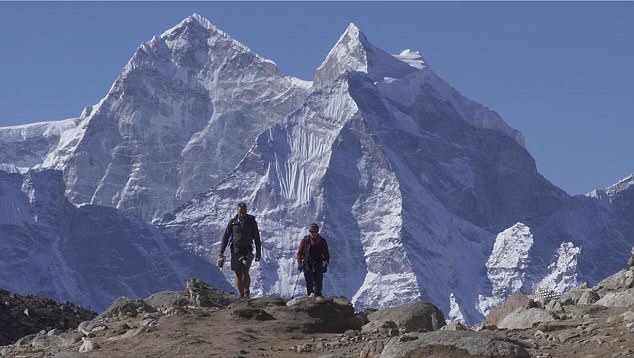 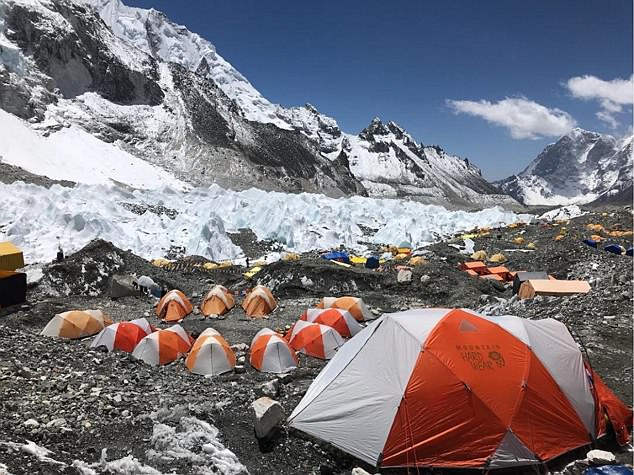 Ben is currently training at Base Camp, to acclimatise ahead of the summit attempt

But then children came along and we grudgingly realised that physical hardship is not the most difficult thing to deal with in life. A foot race to the South Pole is in some ways easier to endure than a child with reflux.

As our children grew up, not only was I more reluctant to let Ben leave us for long periods, but he more than ever wanted to be a consistent part of their lives.

When he told me last year that he wanted to climb Everest, he anticipated that I would not be totally supportive of the idea – and with good reason.

Our children Ludo and Iona are at that golden age of eight and six. They love us, they want to be with us and they are old enough for us all to genuinely have a good time together. And they need him more, too.

But we talked about Everest and Ben raised the considerable amount needed to climb this leviathan. He roped in Kenton Cool, one of the most formidable mountaineers of his generation to guide – and even persuaded Victoria to join them.

As April crept closer, I stopped sleeping but Ben’s enthusiasm had infected Ludo and Iona. Entranced by stories of expedition heroes, they think Everest is the most exciting project ever. And, just like before the Atlantic row, I’m with them. But I’m also aware of the risks.

While climbing the highest mountain in the world is safer now than it was two decades ago, it is still dangerous. The most perilous part of the climb sits directly above Base Camp: the Khumbu Icefall, a frozen waterfall of gargantuan blocks of ice, creaking and groaning as they slowly move down the mountain. 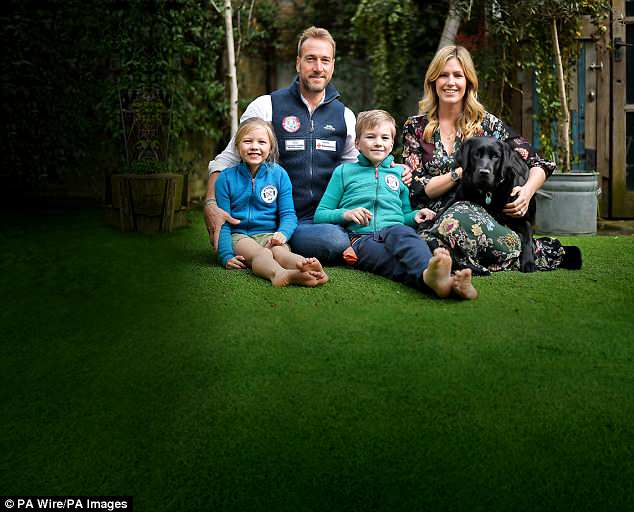 At the beginning of the climbing season, ladders are placed across crevasses, over which climbers balance, wearing their backpacks and crampons.

Over the past two weeks, I’ve been nervous going on to Instagram for fear that I would find another picture of Ben crossing this creaking death trap. Just four years ago, 16 people were killed after a ridge of ice called a serac collapsed.

The climb itself is split – four camps mark the ‘overnight stops’ up the mountain. Camp three, where Ben spent Tuesday, is notoriously scary; climbers pitch their tents on a wall of ice and spend the night hanging precariously from the side of the mountain.

As they climb into the ‘death zone’ – above 26,000ft where the air is so lacking in oxygen that the brain starts to die – the bodies of deceased climbers frozen into the ice are a grim reminder that Everest is certainly not for the faint-hearted.

As a girl, these stories captivated me. But as a wife and mother whose husband has an unquenchable thirst for adventure, these stories horrify me. But Ben didn’t simply announce that he was going – he asked for my opinion and I gave it.

29,029 feet, the summit of Mount Everest, which Ben hopes to reach during his ascent.

365 days spent on the Scottish island of Taransay with 36 others for the hit BBC reality show Castaway 2000, which launched his television career.

60 hours cycling in a rickshaw non-stop from Edinburgh to London with Cracknell.

12 expeditions led, including the Black Cat trail across Papua New Guinea, the Mountains of the Moon in Uganda, Kaieteur Falls in Guyana, and the Peruvian Amazon.

435 miles of desert in Oman crossed with James Cracknell but without a guide.

620 miles of snow covered in the South Pole Race across Antarctica with James Cracknell and Dr Ed Coates.

We talked strategy, discussed the pros and cons, what he would have to sacrifice and what he stood to gain, and by the end both of us thought it would be worth a shot.

And as scary, lonely and downright inconvenient it is for your husband to up sticks for two months, having a front row seat on an expedition to the roof of the world is pretty exciting.

Ben and I are on the same page when it comes to risk and it’s something we’ve talked about openly with our children.

Some of Ludo’s classmates had watched a documentary on that fateful 1996 disaster about which Jon Krakauer wrote so eloquently.

Ludo’s pride in his father’s exploits is heart-warming, but when I overheard him excitedly telling one friend that Daddy was going to climb Everest, that friend responded: ‘But Ludo, you know your Daddy will probably die!’ I cursed Hollywood.

I’m a great believer that the more honest parents are with their children, the more children will trust their parents.

Even though Ludo and Iona are only eight and six, I’ve spoken to them about sex, death, gambling, drugs and swearing. I wholeheartedly feel that parents need to prepare their children for life, not shield them from it.

And so when Ludo announced that ‘no, Daddy definitely won’t die on Everest’, we had to correct him. We explained that, as with most things in life, there is an element of risk and that climbing Everest is a dangerous thing to do. But there are ways of mitigating that risk. Their Daddy has invested time and effort to make sure that he is as well prepared as he can be.

But we also talk about how life is characterised by risk and that we need to weigh up what is or isn’t worth the risk.

I reminded the children of the fun we’d had earlier in the year, skiing through fresh powder, following my sister (a ski teacher) as she led them over jumps in between the trees off-piste. That was totally worth the risk. Not bothering to wear a seatbelt? Not worth the risk. I make no secret of the fact that I’d rather die surfing at 70 than from a urine infection at 96.

But while risk can be calculated, my biggest fear is summit fever. It is famous in the mountaineering world – some climbers have a mad, all-consuming desire to keep on going, regardless of whether that quest will end in death.

And while I hope that Ben would follow Victoria’s lead in withdrawing from the expedition if he needed to, it wouldn’t be easy. He appeared on the front pages of several newspapers last week, and with close to 100,000 people following his climb on Instagram and a cameraman at his heels, Ben can’t quietly turn around and forget he ever tried.

As part of his plan to sweeten me up before his expedition, before he left for Nepal, Ben planned a family holiday to Sri Lanka.

For two weeks we hung out as a family and we talked. Like their parents, our children devour stories of adventure and so we told them about Scott and Shackleton, two men determined to be the first to reach the South Pole.

‘So who do you think is the greater hero?’ I asked them when we had finally finished.

Was it Scott, who resolutely continued his quest to the South Pole, but ended up sacrificing his own life and the lives of many of his team? Or was it Shackleton, who abandoned his attempt and instead focused on getting his team home safely?

We were wholeheartedly with Shackleton, and with that story, Ben convinced us: it takes a strong man to attempt to climb a mountain like Everest; it takes a stronger man still to recognise that he has been defeated and to turn around so that he can get home safely.

So while I’m often close to tears, and while I have a knot of anxiety in the pit of my stomach like a lump of lead, I’m also excited.

Ben exemplifies what I hope for in life and in my children’s lives. He’s not afraid to push himself, to face fear, frustration or potentially failure.

He’s simply doing what he’s always done – and that’s the reason I married him.

attempt, Bens, Everest, FOGLE, husband, MARINA
You may also like: