Matt Hancock reveals which Brits will get Covid-19 jab first

Frontline NHS and social care workers, over-50s and Brits with heart or kidney disease will get Covid-19 vaccine first when it becomes available, Matt Hancock reveals

Frontline health workers, over-50s and Britons with heart or kidney disease will be the first in line to get a Covid-19 vaccine, Matt Hancock revealed today amid the global race against time to find a jab and save millions of lives.

The Health Secretary announced the priority list in tonight’s Downing Street press conference, as he admitted the best way to defeat the disease is by discovering a vaccine — a feat scientists fear won’t be made until 2021.

And he claimed the priority groups, drafted by a government advisory body, was not set in stone, saying other at-risk Brits may be added as the science becomes clearer about who is most vulnerable to the infection.

The advice — which officials said was to ‘save lives and protect the NHS’ — comes after Imperial College London scientists became the second British team to begin human trials of an experimental Covid-19 vaccine this week.

And pharmaceutical giant AstraZeneca has already started to manufacture the other promising vaccine being tested in the UK, made by researchers at Oxford University and already given to scores of Brits.

Mr Hancock said the decision to start making the jab now — before any evidence to prove it works has been uncovered — will allow officials to ‘build up a stockpile’, if it is eventually approved. 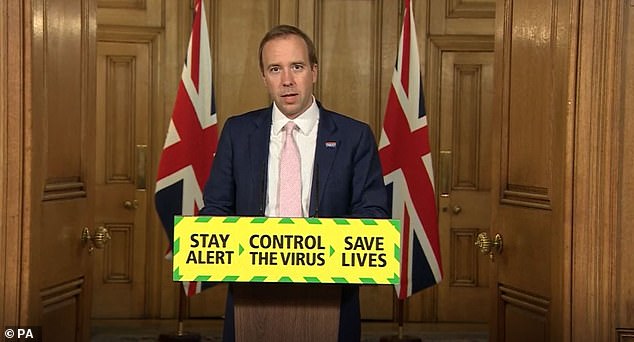 The Health Secretary made the announcement in tonight’s Downing Street press conference, saying ministers would be ‘guided by the science’

The science behind both vaccine attempts hinges on recreating the ‘spike’ proteins that are found all over the outside of the COVID-19 viruses.

Both will attempt to recreate or mimic these spikes inside the body. The difference between the two is how they achieve this effect.

Imperial College London will try to deliver genetic material (RNA) from the coronavirus which programs cells inside the patient’s body to recreate the spike proteins. It will transport the RNA inside liquid droplets injected into the bloodstream.

The team at the University of Oxford, on the other hand, will genetically engineer a virus to look like the coronavirus – to have the same spike proteins on the outside – but be unable to cause any infection inside a person.

This virus, weakened by genetic engineering, is a type of virus called an adenovirus, the same as those which cause common colds, that has been taken from chimpanzees.

If the vaccines can successfully mimic the spikes inside a person’s bloodstream, and stimulate the immune system to create special antibodies to attack it, this could train the body to destroy the real coronavirus if they get infected with it in future.

The same process is thought to happen in people who catch COVID-19 for real, but this is far more dangerous – a vaccine will have the same end-point but without causing illness in the process.

Mr Hancock said: ‘Just as we did for testing, we’ll be guided by the clinical science prioritising those in most need.’

He pointed to advice issued today by government advisory body the Joint Committee on Vaccination and Immunisation (JCVI), who recommended that two groups receive a Covid-19 jab first.

Mr Hancock added: ‘They recommend priority vaccinations for two groups, frontline health and social care workers, and those at increased risk of serious disease or death from coronavirus, including, for example, adults over the age of 50 and those with heart and kidney disease.

‘As we learn more about the virus we’ll continue to take into account which groups may be particularly vulnerable, including, for example, those from ethnic minority backgrounds.’

It added: ‘There is ongoing work within the UK to refine the identification of persons at risk of serious disease and mortality from COVID-19 infection.

‘As well as age and underlying co-morbid conditions, the committee notes that early signals have been identified of other potential risk factors, including deprivation and ethnicity.

‘As more evidence on at-risk groups emerges, this work will inform the review of the composition, and order of priority, of groups for vaccination.

The jab — which the pharma giant’s chief executive believes will offer protection for a year — is currently being trialled on more than 10,000 people.

Mr Hancock said: ‘They’re starting manufacturing now, even ahead of approval so we can build up a stock pile and be ready should it be clinically approved.’

He said there will be sufficient supplies of the vaccine for those Brits most in need, ‘should the science come off’.

Stockpiles of the £5 steroid drug dexamethasone were built-up before health chiefs approved it for NHS use on Covid-19 patients requiring oxygen.

AstraZeneca is banking on the experimental jab working after signing multiple deals with countries around the globe to supply billions of doses of the vaccine.

The Cambridge-based firm last weekend agreed to dish out up to 400million doses in Germany, France, Italy and the Netherlands.

Oxford scientists announced this month that the vaccine was being partly trialled in Brazil because of fears the virus is dying out in the UK.

The Imperial College London vaccine — the second to be tested on humans in the UK — will work slightly differently.

The science behind both vaccine attempts hinges on recreating the ‘spike’ proteins that are found all over the outside of the COVID-19 viruses.

Both will attempt to recreate or mimic these spikes inside the body. The difference between the two is how they achieve this effect.

The Imperial jab will deliver genetic material (RNA) from the virus, which programs cells inside the patient’s body to recreate the spike proteins.

The Oxford University vaccine, on the other hand, will genetically engineer a virus to look like the coronavirus – but be unable to cause any infection.

The next part of the Imperial College London trial will involve 120 humans and will be scaled up to include 6,000 people, if it is proven to be safe.

But Professor Robin Shattock, the lead scientist, said the vaccine won’t be available until at least 2021 even if everything goes according to plan.

Bri, Hancock, Matt, reveals, Which
You may also like: