Matt Hancock insisted ‘black lives matter’ and he ‘shares the anger about racial injustice felt around the world’ tonight as he denied delaying a report on the heightened BAME risk from coronavirus.

The Health Secretary said he ‘gets’ the anger people feel as he nodded to the wave of protests around the world – including in London – over the death of George Floyd in Minnesota. Footage has emerged of a police officer kneeling on the 46-year-old’s neck as he pleaded that he could not breathe.

Denying that the government tried to hold off publication of an official inquiry into high BAME deaths rates to avoid inflaming tensions, Mr Hancock told the daily Downing Street briefing the findings were ‘timely’.

‘This is a particularly timely publication, because right across the world, people are angry about racial injustice,’ he said. ‘And I get that. Black lives matter.’

The Public Health England report appeared to be rushed out this afternoon after a wave of criticism that it might be withheld amid the angry scenes on the streets in the US. Labour’s Keir Starmer had demanded the government stop making ‘excuses’ and reveal the findings.

On another rollercoaster day in the coronavirus saga: 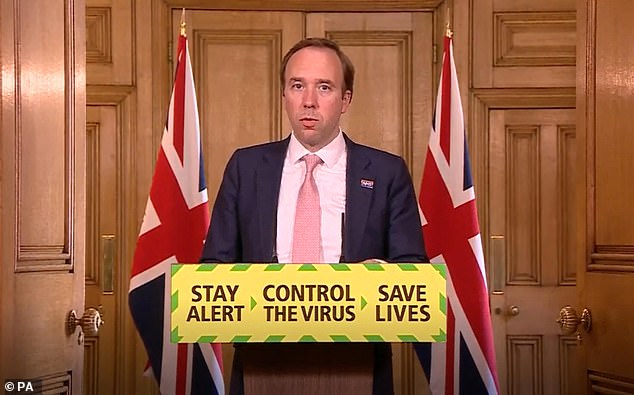 Denying that the government tried to hold off publication of an official inquiry into high BAME deaths rates to avoid inflaming tensions, Matt Hancock told the daily Downing Street briefing the findings were ‘timely’ 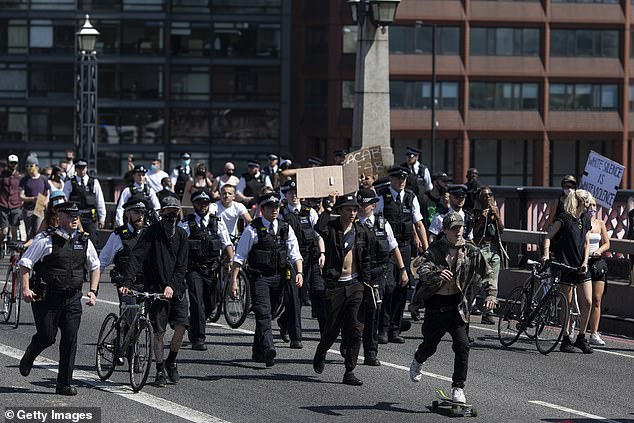 wave of protests around the world – including in London – over the death of George Floyd in Minnesota. Footage has emerged of a police officer kneeling on the 46-year-old’s neck as he pleaded that he could not breathe 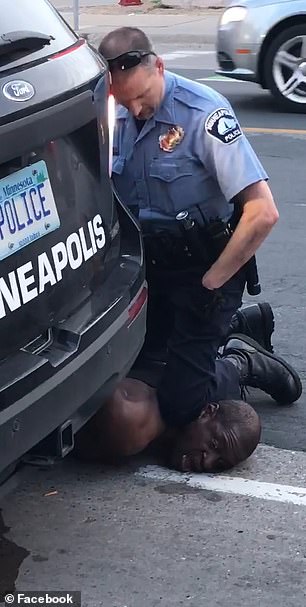 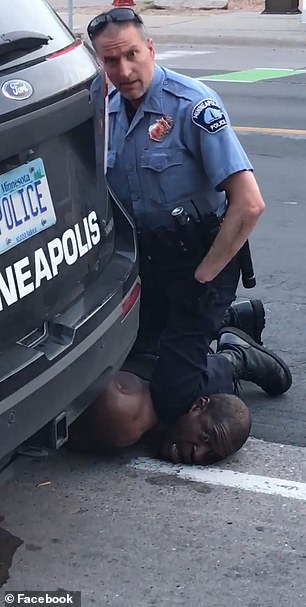 George Floyd, a 46-year-old black man, died on Memorial Day as he was arrested by four police officers over allegedly trying to buy cigarettes with a counterfeit $20 bill. He was seen in a video pleading that he couldn’t breathe as white officer Derek Chauvin pressed his knee against his neck

Mr Hancock said he valued the contrbutions ‘equally’ of ‘everyone who works in the NHS and in social care’.

‘I want you to know that our whole country cares about your wellbeing,’ he said.

‘And I value those who come to our country to work in the NHS and in social care.

‘And I love that this country is one of the most welcoming and tolerant and diverse.’

The study, from Public Health England (PHE), looked at the risk factors for coronavirus and found BAME individuals have a much higher risk of death than white people, as do those from poorer backgrounds, men and anyone who is obese or suffering from diabetes.

The PHE report showed that, after accounting for the effect of sex, age, deprivation and region, people of Bangladeshi ethnicity have around twice the risk of death than people who are white British. 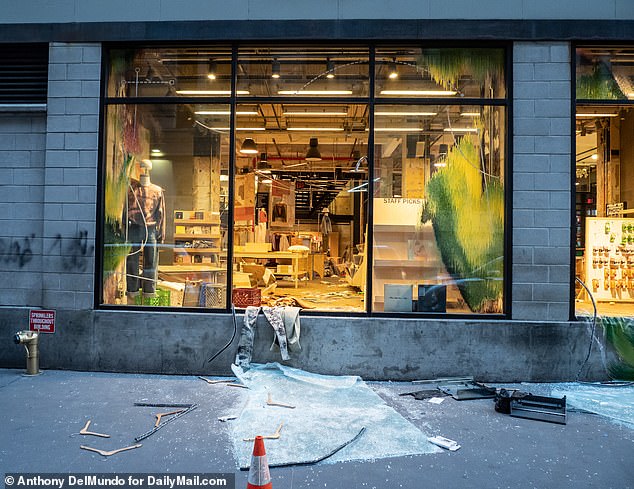 Urban Outfitters was one of several stores hit by looting at Herald Square in New York overnight. Shown, the aftermath on Tuesday morning 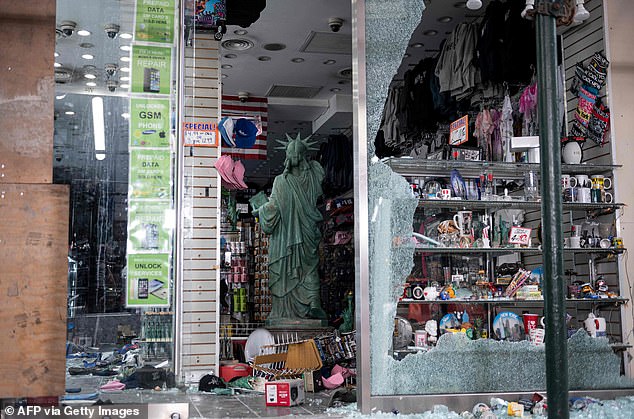 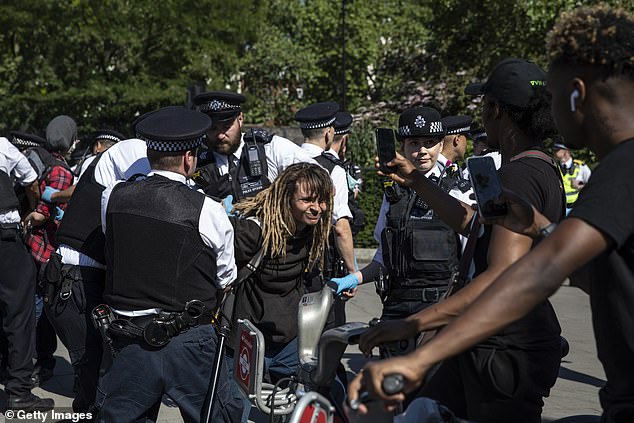 Those of Chinese, Indian, Pakistani, Other Asian, Caribbean and Other Black ethnicity have between a 10 per cent and 50 per cent higher risk of death when compared to white British.

The study said the ‘relationship between ethnicity and health is complex and likely to be the result of a combination of factors’.

Brits from BAME backgrounds ARE more likely to die of Covid-19, Public Health England review confirms – while the disease is 70 TIMES more likely to kill over-80s, diabetes is a major risk factor and men in lower-paid jobs are dying at ‘significant’ rates

Black, Asian and minority ethnic (BAME) people are more likely to die from Covid-19, a government review has confirmed.

The Public Health England (PHE) report revealed Britons of Bangladeshi ethnicity had around twice the risk of white Brits of dying with the coronavirus.

And it showed black people, as well as those of Chinese, Indian, Pakistani, other Asian, or Caribbean backgrounds had between a 10 and 50 per cent higher risk of death. The analysis did not take into account higher rates of long-term health conditions among these people, which experts say probably account for some of the differences.

Evidence compiled in the report also revealed that age is the single biggest risk factor that determines how likely people are to die with the virus – those over the age of 80 are 70 times more likely to be killed than under-40s.

And health conditions which appeared often on people’s death certificates were heart disease, diabetes – understood to be type 2 diabetes, high blood pressure and dementia. More than one in five victims had diabetes, the data showed, which was a significantly higher rate than in people who died of other causes. 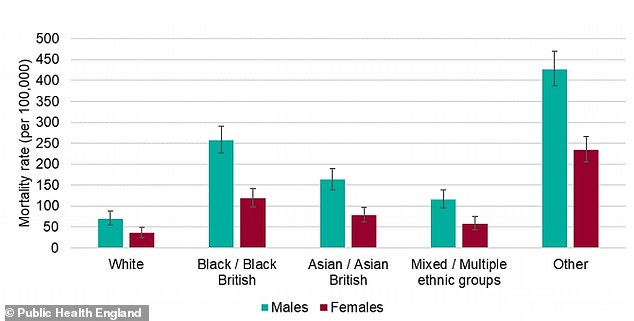 Data in the Public Health England report showed that the mortality rate – the number of people dying with the coronavirus out of each 100,000 people – was considerably higher for black men than other group. The risk for black women, people of Asian ethnicity, and mixed race people was also higher than for white people of either sex. The report warned the rate for the ‘Other’ category was ‘likely to be an overestimate’ 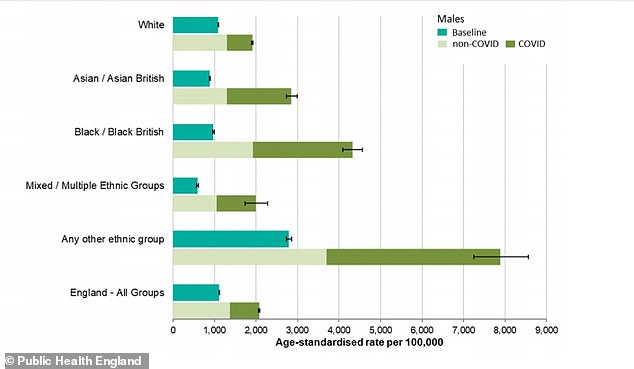 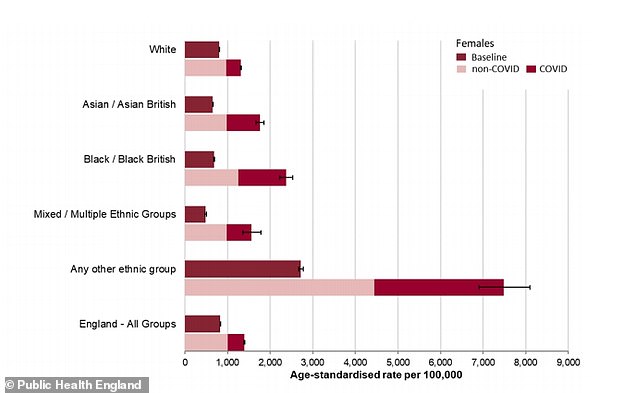 Poorer, more deprived people faced a higher risk of dying and men working in lower-paid jobs – such as security guards, bus drivers and construction workers – also had worse chances of survival if they contracted the virus.

Health chiefs launched a probe to investigate the disproportionate impact of Covid-19 on BAME Brits in April, prompted by a wave of evidence that showed white people were less likely to die from the disease.

He was pushed to deny that the release of the report – which was supposed to happen in May – had not been delayed because of political tensions in the wake of the death of American man George Floyd. He said in the House of Commons: ‘We’ve published it and brought it to the House at the earliest possible opportunity.’

Mr Hancock admitted that the report has ‘exposed huge disparities in the health of our nation’ and his counterpart in the Labour Party, Shadow Health Secretary Jonathan Ashworth, noted: ‘Covid thrives on inequalities’.

Doctors still don’t know exactly what is increasing non-white people’s risk of death, but PHE’s report adds to a growing body of evidence proving the link exists. One paper presented to government advisers in SAGE suggested that higher-than-average rates of type 2 diabetes among black and south Asian people may be to blame – the condition is known to increase risk of Covid-19 death.

And another study done by King’s College Hospital in London found that BAME coronavirus patients there were, on average, 11 years younger than the white patients – 63 compared to 74.