McGahn fails to show at hearing, amping up anger among House Democrats

Washington: Former White House counsel Donald McGahn was a no-show on Tuesday at a House committee hearing, infuriating Democrats who are ramping up calls to start impeachment proceedings against President Donald Trump despite continued resistance from House Speaker Nancy Pelosi.

During an opening statement, House Judiciary Committee chairman Jerrold Nadler, a Democrat, vowed that his panel would eventually hear McGahn's testimony about alleged obstruction of justice by Trump "even if we have to go to court to secure it". 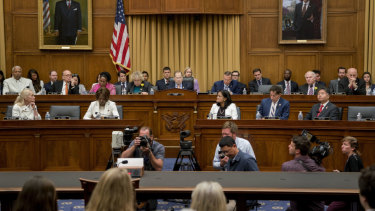 Jerry Nadler, chairman of the House Judiciary Committee (centre), speaks in front of an empty desk where former White House consel Don McGahn was due to appear. Credit:Bloomberg

Collins accused Democrats of being more interested in creating theatre than conducting oversight of the Trump administration.

"Cameras love a spectacle, and Democrats covet the chance to rant against this administration," Collins said.

Democrats declined to press for a vote to hold McGahn in contempt of Congress, but Nadler suggested the move could be taken soon if "he does not immediately correct his mistake" of declining to appear.

The White House announced on Monday that it would block McGahn from testifying, the latest act of defiance in the ongoing conflict between House Democrats and Trump.

Democrats hoped McGahn would become a star witness in their investigation into whether Trump obstructed justice, given that the former White House counsel delivered critical testimony in several instances of potential obstruction by Trump detailed in the report by special counsel Robert Mueller.

A 15-page legal opinion written by assistant Attorney-General Steven Engel argued that McGahn could not be compelled to testify before the Judiciary Committee, based on past Justice Department legal opinions regarding the President's close advisers.

The memo said McGahn's immunity from congressional testimony was separate and broader than a claim of executive privilege.

During his remarks, Nadler asserted that case law is on the committee's side and accused Trump of seeking to intimidate McGahn from appearing, calling that "not remotely acceptable".

"When this committee issues a subpoena – even to a senior presidential adviser – the witness must show up," Nadler said. "Our subpoenas are not optional." 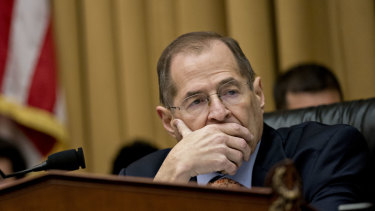 Nadler said he may hold McGahn in contempt for failing to appear before the House.Credit:Bloomberg

McGahn's no-show was the latest episode in a sweeping attempt by Trump and his administration to resist oversight by the Democrats-led House.

Separately on Tuesday, Trump's lawyers notified a federal judge that they have appealed "all aspects" of his Monday ruling that the President's accounting firm must turn over his financial records to Congress.

In a ruling on Monday, the judge flatly rejected arguments from the President's lawyers that the House Oversight Committee's demands for the records from Trump's accounting firm, Mazars USA, were overly broad and served no legitimate legislative function. 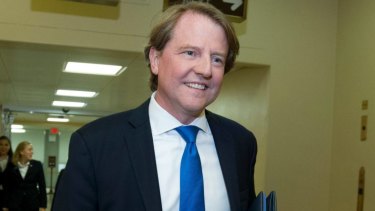 Pelosi has scheduled a Democratic caucus meeting for Wednesday morning to discuss updates on oversight and investigations, according to two Democrats briefed on her plans who requested anonymity to discuss a meeting that has not been publicly announced. Members expect the meeting will include a robust discussion of whether to launch an impeachment inquiry against Trump.

Pelosi has long been an impeachment sceptic and tried to tamp down impeachment talk in her ranks as recently as last week by encouraging members to focus on their legislative agenda.

But calls to launch an impeachment inquiry have escalated since the White House's announcement on Monday that McGahn would not testify.

"It would signal to all of the parties that this is a serious inquiry by the committee with the potential or consideration of impeachment as a final action," Democratic Congressman David Cicilline, a member of the Judiciary Committee and the House leadership team, said during an appearance Tuesday morning on MSNBC.

Some Democrats have argued that their court victory on Monday was an encouraging sign that they can prevail over Trump in the judiciary and a reason to hold off on impeachment.

But Congresswoman Maxine Waters told reporters that "winding your way through the courts could take a lot of time".

"We also know that this is something that the President has relied upon in his business dealings, that he can win in the courts because he can outlast those who are bringing lawsuits against him," Waters said in explaining her support for launching an impeachment inquiry. "So while I have a great appreciation for that ruling… I still think we should move forward."

Other Democrats cautioned that beginning the impeachment process would overshadow work on legislation important to their constituents.

"I believe in checks and balances and the constitutional division of powers," said Elissa Slotkin, a Democrat representative from Michigan. "But I also know that I get stopped in the grocery store constantly and what people are asking about is the price of health care and the price of prescription drugs … I think the perception is that Washington is more focused on the checks and balances than they are on actually helping people's pocketbooks and their kids. And that's a real problem."

During closed-door meetings on Monday night, several members of Pelosi's leadership team pressed her to begin an impeachment inquiry, according to multiple officials in the rooms – an effort the speaker rebuffed each time.

At least five members of Pelosi's leadership team – four of whom also sit on the House Judiciary Committee, with jurisdiction over impeachment – pressed Pelosi in a closed-door leadership meeting to allow the panel to start an inquiry, which they argued would help investigators attain documents and testimony that Trump has blocked.

Several hours later, Nadler met with Pelosi and made the case to start the inquiry, he later told his panel members on a call.

Pelosi declined to endorse the idea both times, according to the officials, who were either in the meetings or familiar with what happened in them. She and House Majority Leader Steny Hoyer argued that such an inquiry would undercut other House investigations – or that the idea was not supported by other members in the caucus.

at, fails, hearin, McGahn, show, to
You may also like:

Coronavirus droplets can hang in the air for more than an HOUR, top SAGE expert warns