Wellington: Internet entrepreneur Kim Dotcom lost another bid to avoid extradition to the United States on charges of copyright infringement and money laundering, after New Zealand's Court of Appeal on Thursday upheld rulings allowing for his deportation. 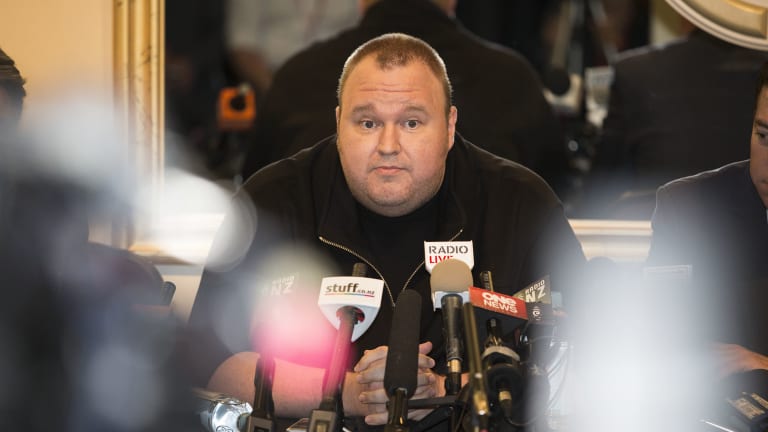 Kim Dotcom during a press conference at the Auckland Town Hall after his “Moment of Truth” public meeting in 2014..

Dotcom, an online renegade who along with three associates faces the charges relating to a defunct file-sharing website, Megaupload, plans to appeal the ruling.

His lawyer, Ira Rothken, said Dotcom would appeal to the Supreme Court, New Zealand's highest. He added that if the court agreed to hear the case, the process could take a year.

The internet mogul was arrested in 2012 as a result of a US Department of Justice investigation into online piracy of numerous copyrighted works, including music and films. He has been fighting extradition to the United States from New Zealand since then, and is out on bail in the country's largest city, Auckland.

US prosecutors say the Megaupload site cost copyright holders $US500 million ($676 million) in damages because of illegal downloads, and that the website's executives made $US175 million for themselves by selling ads and premium subscriptions.

Dotcom is a high-profile figure in New Zealand, known for his lavish public parties and displays of wealth, and for releasing an album and bankrolling an unsuccessful political party before the country's 2014 election.

The Court of Appeal said in its decision that the United States' case against Dotcom and his associates — Matthias Ortmann, Bram van der Kolk and Finn Batato — was "both admissible and sufficient" to allow for the extradition of the four men. They face decades in prison if convicted in US courts.

The decision means that New Zealand Justice Minister Andrew Little will decide whether Dotcom should be extradited after any Supreme Court appeals are exhausted.

Dotcom said in a statement he was "confident" the Supreme Court would hear the case "given there are such significant legal issues at stake."

German-born Dotcom, whose original name was Kim Schmitz, was granted New Zealand residency on an investor visa in 2009 after having lived in Hong Kong.

Last year, he reached a settlement with New Zealand police over a 2012 raid on his property that resulted in his arrest to face the US charges. He received an undisclosed sum of money as part of the settlement.

At the time, Dotcom called the manner of his arrest "a Hollywood-style publicity stunt tailored to appease US authorities."

Dotcom is also suing the New Zealand government for millions of dollars, claiming lost business opportunities, investments and reputation as a result of its treatment of him.

Appeal, Dotcom, extradition, Founder, Kim, loses, Megaupload, Us
You may also like: