Sour Sammy: Meghan Markle’s half-sister says Doria Ragland looked like a ‘hockey player in the penalty box’ at the wedding and accuses her of cashing in with her Oprah interview

Meghan Markle’s half-sister Samantha has issued a stinging series of barbs at the princess’ mother Doria Ragland in the latest outbreak of family feuding following the royal wedding.

In an interview on Monday, Samantha fired off a false and offensive statement about mother-of-the-bride Doria Ragland, who remains the only member of the Duchess of Sussex’s family to not try and cash in on her daughter’s new title.

She then followed that up on Tuesday with an unnecessary remark about Ragland at the royal wedding. 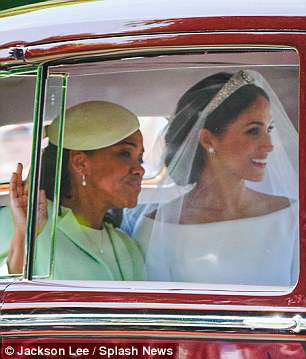 Meghan Markle’s half-sister Samantha Grant fired off a series of barbs at Doria Ragland. Pictured: Meghan and Doria on Saturday (left) and Grant on a TV news show on May 14 Doria watches the ceremony in St George’s Chapel, Windsor, on Saturday. Samantha mocked her for sitting alone in a series of angry tweets

Samantha was appearing of Ed, Grant & Em on Monday, where she said that Meghan’s mother had been cashing in by pointing out the interview she gave to Oprah Winfrey and the release of photos only she would have had been able to provide the press.

There has not been any interview between Doria and Oprah however, and there is no proof or evidence to suggest that Doria has ever sold pictures of her daughter.

When the hosts then pointed out she too cashed in, and question her ‘fond memories’ claim, Samantha replied: ‘Here’s what’s fundamentally wrong if family and friends don’t make money, the journalist and tabloids are going to make money and they have less right.’

The woman who said she was glad to miss the wedding because ‘traffic there would have been chaotic,’ also declared: ‘It’s not cashing in to share fond memories.’ 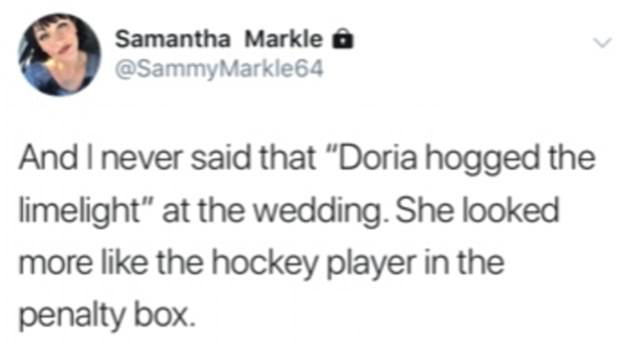 On Tuesday she was back on social media, with no contractual obligations keeping her from sharing her thoughts about the wedding on Twitter.

She began by denying a claim that she said Doria hogged the limelight before stating: ‘She looked more like the hockey player in the penalty box.’

That remark was not nearly as offensive as the next however, when she responded to one tweet by saying of Doria: ‘She was probably sitting there crying because she knew that she sold out in cashed in bigger than anyone, and that she isolated our dad. Guilty.’ Meghan poses with Samantha while her half-sister collects a university degree. Photo undated

She kept going to, saying of Doria’s look: ‘The Givenchy was beautiful but I would have put her in a hockey uniform.’

Doria wore Oscar de la Renta to her daughter’s ceremony and Stella McCartney to the reception.

Samantha also used to Twitter to deny being bitter or upset at the snub, telling on person: ‘I was not miserable it was quite comfortable London would have been too much of a madhouse and I don’t like crowds.’

This comment came three days after she watched her sister get married in front of a camera crew.

Samantha also raged at the news Meghan’s family would not be allowed to use her coat of arms, claiming this was a snub.

She claimed the Windsors had no right to feel superior over the Markle family because they have had their own series of scandals.

‘Well the royals had generations of scandal in their own family,’ said the woman who is hoping to reconnect with the newest member of the royal family.