Britain is braced for Storm Gavin (and it has nothing to do with Mr Williamson!)… Met Office unveils names for upcoming extreme weather including Aiden, Fleur and Julia

We should still be thinking about picnics and paddling pools, not conkers and bonfires. But yesterday’s weather felt more like autumn than summer.

England saw the coldest start to an August Bank Holiday Monday in nearly 40 years, with most places struggling to reach temperatures in the high teens despite widespread sunshine.

And as the unseasonal chill settles over the country, there’s another dark cloud on the horizon: forecasters have already given names to a crop of autumn storms set to hit the UK – and one of them is called Gavin. 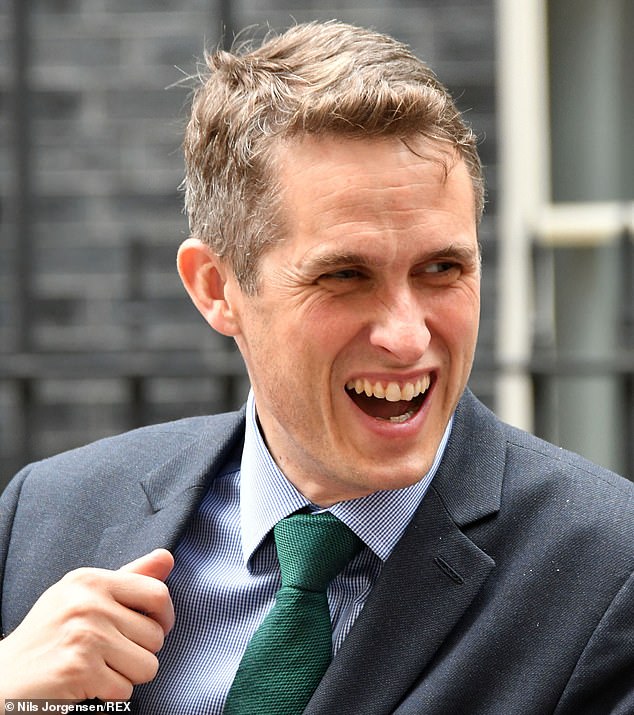 Luckily, Storm Gavin is yet to make an appearance in the UK – but the gale-force furore surrounding Mr Williamson (pictured) still rages as he continues to face calls to resign

Britons could be forgiven for thinking they had already faced enough havoc caused by somebody with that name after the exams chaos wreaked by Education Secretary Gavin Williamson.

Luckily, Storm Gavin is yet to make an appearance in the UK – but the gale-force furore surrounding Mr Williamson still rages as he continues to face calls to resign.

Other storm names, picked by the Met Office and the Irish and Dutch equivalents from the public’s suggestions, include Evert – a popular Dutch name – the ancient Irish name Saidhbhín, pronounced Sigh-veen.

An Austen-sounding Darcy is also on the list – although in this case it’s the girl’s name rather than the Pride and Prejudice character.

Storms are allocated names in alphabetical order, meaning the first of the autumn will be Aiden, followed by Bella and Christoph with Gavin in seventh place.

THE NAMES TO WATCH OUT FOR

A more immediate prospect is the remnants of Hurricane Laura, set to hit British shores tomorrow after leaving a trail of devastation through the southern US.

It will bring with it gale-force winds and heavy rain, though temperatures will nudge upwards.

Many wondered where summer had got to yesterday, when Ravensworth, North Yorkshire, saw a low of just 0.6C (33F) – a stark difference to last year’s record-breaking highs of 33C (91F) and the coldest start to an August Bank Holiday Monday since 0.2C (32.5F) was recorded in Kielder Castle in Northumberland in 1983.

A Met Office spokesman said: ‘While it’s not been anything like as warm as last August Bank Holiday, for most of us temperatures have only been a couple of degrees cooler than we would expect for this time of year, so it’s felt very pleasant in the sunshine.’

Today will see the largely dry, sunny weather continue, while sunshine and showers will return in the wake of Hurricane Laura.

High pressure next weekend is expected to bring drier, brighter conditions. Confusingly, not all storms are necessarily named from the Met Office’s list as they may arrive with monikers from other weather units.

For example last September’s Storm Lorenzo retained the name it was given by the US National Hurricane Center, while Storm Jorge in March was named by Spanish forecasters.

for, met, names, office, U', unveils
You may also like: