Mexico City: Mexico has recorded 122,765 deaths more than would be expected during the pandemic up to August, the health ministry said on Saturday in a report on excess mortality rates, suggesting Mexico's true coronavirus toll could be much higher.

Mexico has recorded 67,326 confirmed coronavirus deaths and 629,409 cases, the world's fourth highest death toll from the virus that has infected more than 26 million people around the globe. 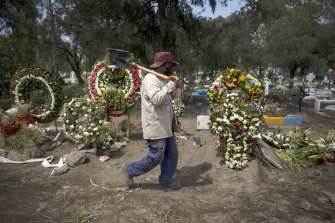 A grave digger walks in the COVID-19 section of the cemetery of San Lorenzo Tezonco Iztapalapa on the outskirts of Mexico City.Credit:AP

Mexico's government has often said the real number of infected people is likely to be significantly higher than the confirmed cases due to the low levels of testing.

In its latest nationwide study about excess mortality rates, a globally recognised means of determining the impact of a pandemic, Mexico's ministry said 122,765 more people had died than expected between mid-March and August 1.

Mexico's reported coronavirus deaths at the start of August stood at just over 47,000, suggesting more people may have been dying from the virus than originally reported.

The ministry officials said the excess deaths, calculated to be above the four-year average of nationwide fatalities from 2015 to 2018, does not mean they have all died from the coronavirus, and may have died from other causes.

But Ricardo Cortes Alcala, the director-general of Health Promotion, conceded the coronavirus has inflicted a heavy toll on Mexico's population.

"What we want is that this load is as low as possible," he added.

On Friday, Mexico's coronavirus czar, Hugo Lopez-Gatell, said the steady decline in the new coronavirus cases had stalled between August 9 and August 22.

"This is certainly disconcerting because we all would like this to decrease until the epidemic disappears," he said.