His team of pollsters and strategists had surveyed the political landscape and concluded he had no viable path to the party's nomination.

"I believe I would defeat Donald Trump in a general election," Bloomberg wrote in a column at the time.

"But I am clear-eyed about the difficulty of winning the Democratic nomination in such a crowded field." 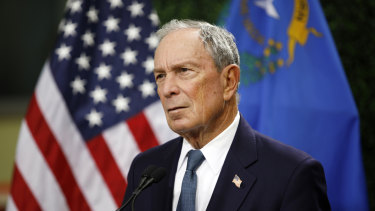 Business Michael Bloomberg is planning to make a late entry into the Democratic presidential race.Credit:AP

Eight months later it appears Bloomberg has changed his mind: he has told associates he intended to run, and was completing the paperwork to be included on the ballot.

It's an understandable decision, but a quixotic one. A Bloomberg presidential bid is extremely likely to end in defeat –  just as he decided it would in March. 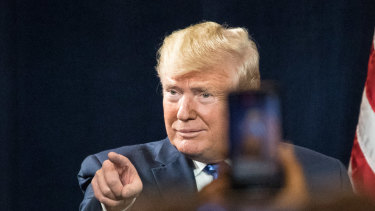 US President Donald Trump said of his possible opponent: “Little Michael will fail”.Credit:Bloomberg

Bloomberg's decision reflects the growing alarm among the Democratic Party's establishment and donors about the party's prospects.

They fear the party is veering too far to the left, and risks blowing its chance of defeating the US President in 2020.

Bloomberg adviser Howard Wolfson said on Thursday that "Mike is increasingly concerned that the current field of candidates is not well positioned" to beat Trump.

Bloomberg is right to be worried about the party's presidential frontrunners: all have glaring weaknesses that raise doubts about their ability to win in 2020.

Joe Biden, the leading moderate in the race, has put in faltering debate performances and appears to be past his prime. He has next to no support among younger voters and is struggling to raise cash.

Elizabeth Warren has locked herself into an expensive and unpopular position on healthcare that is likely to scare away independent voters in the key states. Recent polls also show a substantial number of these voters are wary of supporting a female candidate.

Self-declared socialist Bernie Sanders, 78, recently had a heart attack. Indiana mayor Pete Buttigieg has no national political experience and his support base is lilly white.

As a potential rival to these candidates, Bloomberg has many advantages.

With an estimated net worth of $US53 billion ($78 billion), he doesn't have to worry about raising money to campaign. He can point to his track record as a phenomenally successful businessman and his widely acclaimed 12 years as mayor of the nation's biggest city. And he has a track record of activism on gun safety and climate change – two top issues for Democratic voters.

But the party's base is increasingly populist and progressive, making it hard for a pro-business billionaire to win support. Bloomberg, 77, is not a scintillating campaigner, and he was a Republican for most of his years as mayor.

A March poll by Monmouth University found just two per cent of Democrats named Bloomberg their first choice to be the party's nominee. He had a net favourability rating of just +1 per cent among Democrats compared to +63 for Biden and +53 for Sanders.

Short of Michelle Obama, I can’t think of any late entrant who could make a dent other than to hurt one of the existing front runners.

While the overwhelmingly white and wealthy establishment wing of the party is alarmed by the primary field, polls show grassroots Democrats are far more satisfied with their options.

"Short of Michelle Obama, I can’t think of any late entrant who could make a dent other than to hurt one of the existing front runners."

If Bloomberg did pick up support, it would be at the expense of moderates such as Biden and Buttigieg. Warren and Sanders supporters would never vote for him.

That means a Bloomberg entry into the race would make it more likely rather than less likely that a far-left candidate becomes the party's nominee.

Given Bloomberg's fears about the party's direction, it would be a perverse but entirely predictable outcome.