Victoria’s $5.3 billion social housing construction blitz will be larger than first revealed, with Housing Minister Richard Wynne outlining an ambitious 10-year plan that could lead to 14,500 homes being constructed in the first four years alone.

The building program is being billed as the biggest social and affordable housing program in the state’s history. 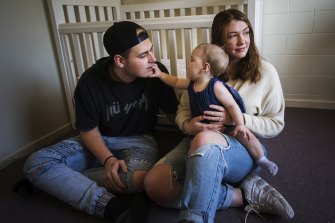 In briefings with local governments and other stakeholders this week, Mr Wynne said the Victorian government could build an additional 2500 homes in the next four years on top of the 12,000 initially announced by the government in November.

The new 10-year strategy will be “jointly owned” by state and local governments, the private sector, community housing and community services.

At its heart would be a commitment to getting vulnerable people into social housing, providing them with services to help them get back on track and offering pathways to private rental accommodation.

Every parent knows the challenges of looking after a newborn, but the experience was made even harder for teenagers Destiny Axten Sarpa and Gage Potter because of unstable housing.

After the arrival of their now nine-month-old daughter, Winnie, the couple was moved between three different hotels, before they were placed in a refuge and then transitional housing.

“The thing that was really the most upsetting was not having her own bedroom and not being able to set up for her,” said Ms Axten Sarpa, 19, who grew up in public housing.

The couple struggled with feeling unsafe in the hotels, and a lack of privacy and independence at the refuge.

Ms Axten Sarpa said the constant moving, sometimes with hours’ notice, and the stigma attached to living in a refuge made it hard to look for jobs, maintain friendships, join parenting groups and set up their lives as a new family.

But less than two weeks ago the family struck luck and was moved into their own two-bedroom unit with the help of Launch Housing.

“It’s great; it’s small, but it’s nice and cosy. Winnie has somewhere to play and have friends over. She’s sleeping through the night,” Ms Axten Sarpa said.

“It sets her up for a stable childhood. It’s going to make us flourish.”

Mr Wynne told local government representatives on Tuesday the government would work closely with councils in the large-scale construction of social housing.

“This 10-year strategy will provide the road map for a stronger and more sustainable housing system for Victoria,” Mr Wynne said.

“Our unprecedented investment in safe, secure housing will change lives – not only putting a roof over people’s heads, but creating thousands of jobs as we rebuild from coronavirus.”

The waiting list for social housing has ballooned to more than 48,000 households, an increase of more than 8000 in the second half of 2020.

Of those, 22,000 households are in the “priority” category for housing, meaning they have an acute need for help due to homelessness, family violence, severe mental illness or other urgent factors.

“It’s very much tailored towards social housing, which is a positive,” he said. “COVID was a sharp realisation that we’re well below the national average of social and affordable housing here in Victoria.”

Victoria has the lowest proportion of social housing in Australia. Only 3.2 per cent of Victoria’s housing stock is social housing – about 81,000 dwellings – below the national average of 4.2 per cent. Just 16 per cent of private rentals in Victoria are affordable for lower-income households.

Homes Victoria, the new agency tasked with delivering social housing, expects the number of new applicants for social housing to rise as the lingering effects of the COVID-19 pandemic continue to bite.

Mr Wynne told stakeholders this week that land availability would be crucial to the program’s success. Land could account for a third or more of the total cost for social housing development, he said.