The Treasury minister said the areas would give fans a ‘choice’ and mean ‘better atmosphere’ at matches.

Posting a picture of herself at a Norwich City game, Ms Truss said she was ‘proud’ her club had ‘led the way’ on the issue.

The government is currently consulting on changing the law to allow standing in the top flight and Championship.

It was banned in 1989 under the Football Spectators’ Act, following recommendations in the Taylor Report into the Hillsborough disaster, which claimed the lives of 96 Liverpool fans. 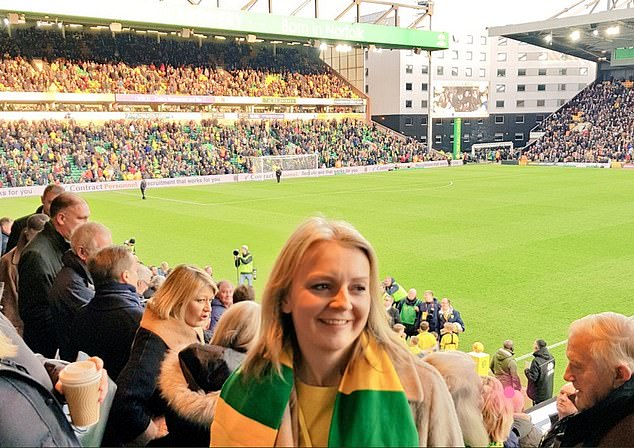 Posting a picture of herself at a Norwich City game, Liz Truss said she was ‘proud’ her club had ‘led the way’ on the issue of safe standing

However, many supporters have campaigned for standing areas at matches, pointing to improvements in safety practices and better technology.

Earlier this year, 94 per cent of the 33,000 respondents to an English Football League survey said fans should be allowed to choose between standing or sitting.

The Department for Digital, Culture, Media and Sport (DCMS) announced a review in June, saying it would look at the ‘impact of standing on disorder’, along with stadium and seating design and technology.

Ms Truss, MP for South West Norfolk, tweeted over the weekend: ‘I support safe standing being allowed in the Championship and Premier League.

‘More choice and better atmosphere for fans. Proud @NorwichCityFC have led the way on this. #freetostand #ncfc’

Everton has said it wants to introduce ‘safe-standing’ areas in a new £500million dockside stadium if the government’s position does change.

The 52,000 capacity stadium on Liverpool’s dockside could have two stands able to accommodate continental style rail-seating. 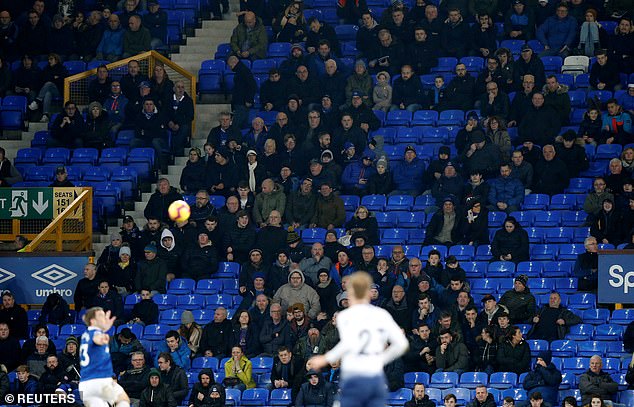 Standing at matches in the top flight was banned in 1989 under the Football Spectators’ Act, but Everton have said they could introduce standing areas at a planned stadium to replace Goodison Park (pictured) if the government changes position