A model who is feared to have died in the Pakistan plane crash last week has received online abuse posthumously.

Trolls on Twitter shared images of Zara Abid, 28, attacking her for her ‘sinful’ outfits and modelling career, with religious radicals saying she will be punished in the afterlife.

Abid is believed to have been one of the 98 people on board the Pakistan International Airlines aircraft that crashed into a residential area in Karachi on May 22.

While she has not been named, officials have said only two people survived the crash, and manifest records and her friends appear to have confirmed she was on the flight.

Her social media profiles – Instagram, Facebook and Twitter – have all been taken down since, although it is unclear if this was done by her family following the abuse. 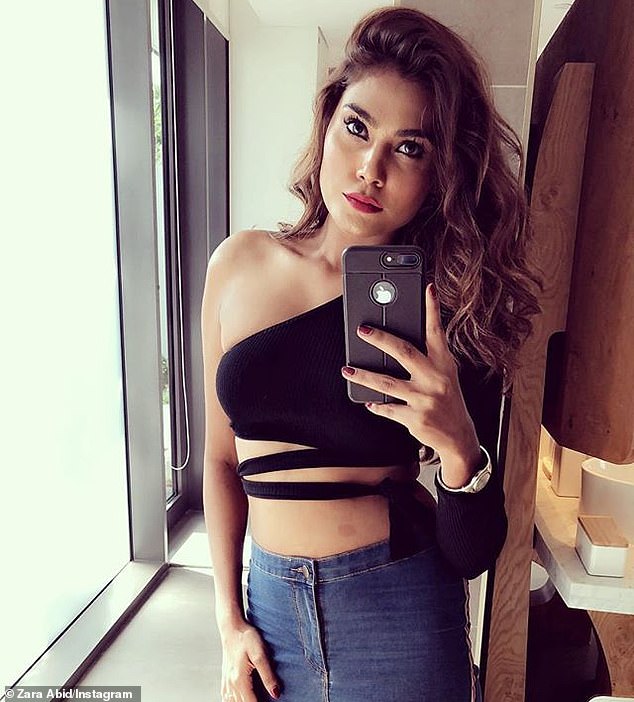 Zara Abid, 28, is believed to have been on the plane that crashed in Pakistan on Friday into a residential area in Karachi

As news began to spread that it is believed she was one of the people to have died in the crash, a number of social media accounts belonging to religious radicals questioned Abid’s faith, suggesting she would be punished in the afterlife for her profession and lifestyle.

A number shared modelling pictures of her as apparent examples to back their claims.

One user, posing under the name ‘Irfan’, wrote: ‘Those people who are saying that she will be in paradise after plane crash accident then being Muslim I would tell them ALLAH Pak doesn’t like those women who are showing their body parts to everyone and jannat is only for pure men and pure women.’

Another, Zarwan Ali, tweeted: ‘I really didn’t wanted to do it but some people are ignorant and are now using Zara Abid death to defend her profession and lifestyle.

‘Sorry that can’t be defended that is prohibited and those who kept telling her that she is doing Haram did right thing. Still do dua for her.’

In Pakistan’s conservative society, women are expected to be modest, but those in the public eye often find themselves on the wrong end of moral derision online.

In response to the abusive tweets, however, people jumped to her defense, rebuking those who were criticising her and her career.

‘And this is another example that Allah honors whom he wills. None of us know who is closer to God. Stop judging people and focus on your actions. May Allah forgive us and get us out of this difficult situation,’ wrote twitter user Esra Bilgic.

A similar message and sentiment was shared by many other users who mourned the model. Many pointed out that the plane crash had happened as the country was preparing to celebrate the end of Ramadan and the beginning of Eid al-Fitr, suggesting she was now closer to God.

Abid had worked with some of the most recognisable fashion brands in Pakistan, and in January won ‘Best Female Model’ at the Hum Style Awards. She was also set to make her debut as an actress later this year, the BBC said. 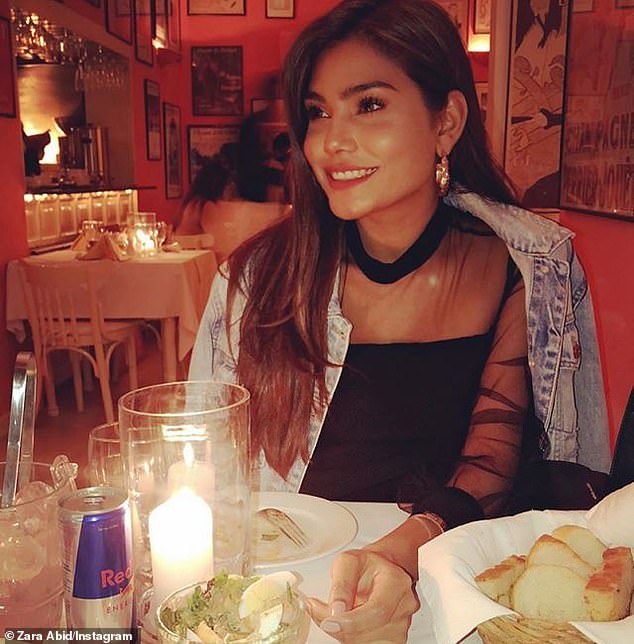 Abid has been the target of online abuse since news broke that she is believed to have been on the plane that crashed, with some religious radicals saying she would be punished in the afterlife for her profession

A bank executive and at least one other passenger were pulled alive from the wreckage of the Airbus A320 which crashed after an engine failure on Friday, with 98 passengers on board.

Bank of Punjab president Zafar Masood was dragged from the smoking debris of the Pakistan International Airlines flight after it smashed into a residential area in Karachi.

At least two people aboard survived, according to the country’s health department, revising an earlier statement that three were alive. But the other 95 passengers and crew are believed to have died. 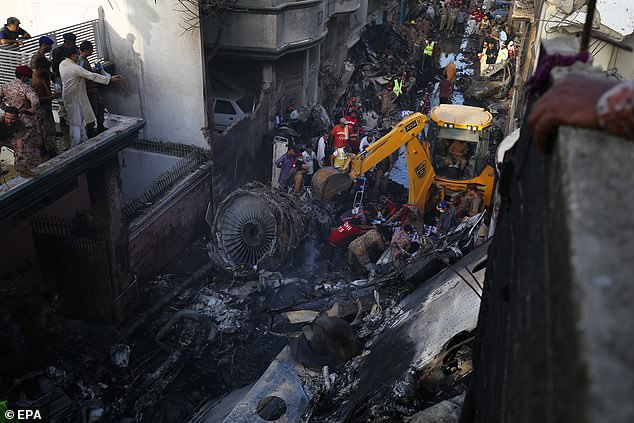 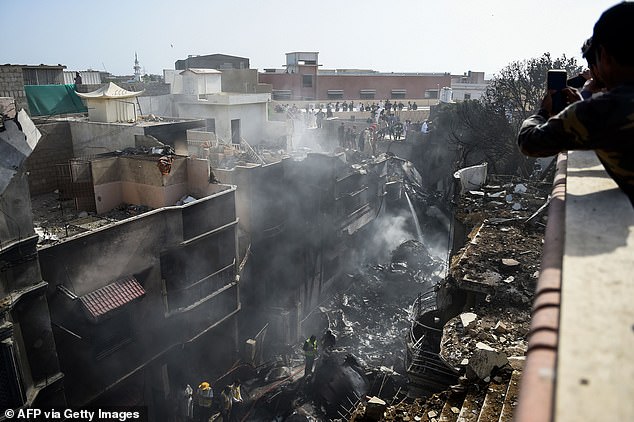 ‘Thank you so much. God has been merciful,’ Mr Masood, the banker who was in seat 1C said, according to officials who spoke to him in hospital after the crash.  The other known survivor was named as Muhammad Zubair.

Witnesses said the flight from Lahore had made three failed attempts to land at Jinnah International Airport before ploughing into the Model Colony area of the city on a fourth landing attempt.

Pakistan’s civil aviation authority said the plane had 91 passengers and a crew of seven.

The pilot told air traffic control that he had lost both of his engines and a recording has emerged of the captain making a final mayday call before the crash. The Airbus A320-214 model uses a CFM56 engine made by CFM International, a joint venture between US-based General Electric and France’s Safran.

A photo of the aircraft on approach also shows that the landing gear is still up and black scorch marks under each engine.

The air traffic control recording starts after the pilot has lready made one failed landing attempt. 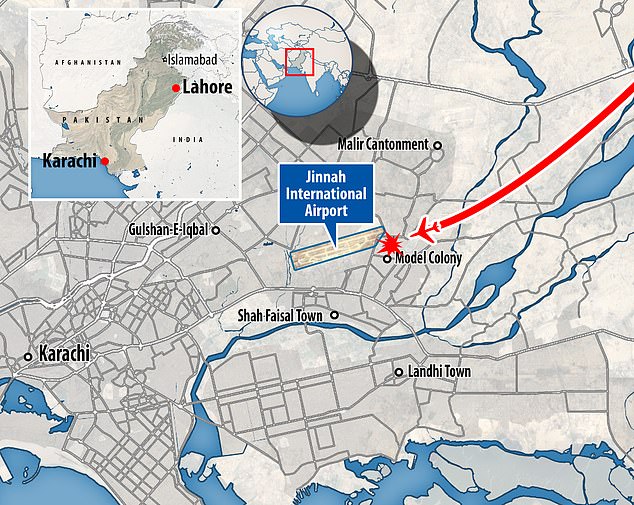 The plane had been flying from Lahore to Jinnah, which usually takes 90 minutes, before it went down in the Model Colony area as it began its final approach to land at Karachi airport

Safety record of the Airbus A320…

There have been 119 aviation incidents and accidents across the Airbus A320 fleet.

The narrow-body airliners are designed and produced by Airbus, and the first A320 was launched in 1987.

The fleet’s first crash happened just a year later in 1988 after the captain of an Air France Flight 296 delayed applying full power as he climbed away, crashing into trees beyond the runway.

Four further crashes happened in the 1990s, including in Bangalore, the Vosges mountains, Warsaw, and the Philippines.

It is believed that 18 of the accidents have been fatal, including more than 1,400 deaths.

A total of 47 hull loss incidents – when the plane is damaged beyond repair – have occurred among the fleet.

The pilot says: ‘We are proceeding direct, sir – we have lost engine’.

‘Confirm your attempt on belly,’ the air traffic controller said, offering a runway.

Videos uploaded on social media show the plane’s final moments as it steadily descends to the shrieks of terrified residents. Witnesses say the plane was so low they felt the walls of their houses tremble and saw the plane tilted on one side.

Plumes of smoke smothered the skyline after the Pakistan International Airlines plane smashed into houses among the poor and densely populated area of Model Colony that is two miles from the airport.

The A320 can carry up to 180 passengers, depending on how its cabin is configured.

The Airbus had been flying from Lahore to Jinnah, which usually takes 90 minutes, before it went down in the Model Colony area as it began its final approach to land at Karachi airport. 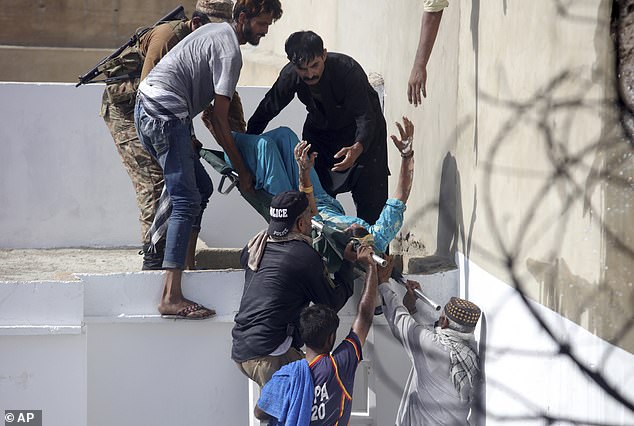 Dead, feared, in, Model, Pakistan
You may also like: