A Moe woman is in police custody after detectives arrested her as part of a six-month-long investigation into the suspicious death of Jarrad Lovison.

A police spokeswoman said detectives from the missing persons squad arrested the woman, aged 24, during the execution of a search warrant at an address on Coalville Road in Moe early Tuesday. 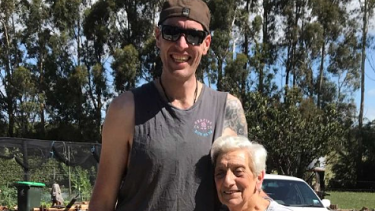 They said a white Toyota was also seized as part of the investigation and will be forensically examined in coming days.

The arrest comes six months after Mr Lovison, 37, disappeared from the side of Moe-Walhalla Road during the early hours of April 16.

His body was later found in bushland at Moondara on May 23, following extensive appeals for information.

"The woman remains in police custody and the investigation remains ongoing," the police spokeswoman said.

Tuesday's arrest follows an emotional appeal from Jarrad's father who pleaded with Victorians to help catch his son's killer.

John Lovison said his family was "living in hell" not knowing what happened to Jarrad who has been described as a 215-centimetre "gentle giant" from Newborough.

"It's just hard, it's just so hard, it's been nearly six months and we cry a lot, we scream a lot, we wonder a lot, we’re angry, we just want to know who did this to our son. Jarrad wasn’t perfect but he was a bloody good kid. He didn’t deserve this," Mr Lovison said at the time.

Jarrad Lovison entering Woolworths shortly before he disappeared and the bike he was seen riding.Credit:Victoria Police

But in early October they said further investigations had uncovered a new sighting that led them to believe Mr Lovison was still alive the following morning at 3am, riding his bicycle to meet an "associate" on Moe-Walhalla Road.

Detectives are also investigating a reported sighting of Jarrad's green bike propped against a tree on Becks Bridge Road, north of Adam View Court, about 2.30pm on April 18.

It's believed a white wagon stopped there and took the bike.

Investigators are urging anyone with any information to contact Crime Stoppers on 1800 333 000 or submit a confidential crime report at www.crimestoppersvic.com.au

Arrested, Following, Moe, S, woman
You may also like: