THIS video shows the moment a parking attendant danced after apparently issuing an elderly man with a parking ticket while he got his wife's medication during the coronavirus crisis.

The attendant was filmed by bystander Ben Toovey outside a pharmacy in Bromley, South East London, at around 10.30am on Friday morning. 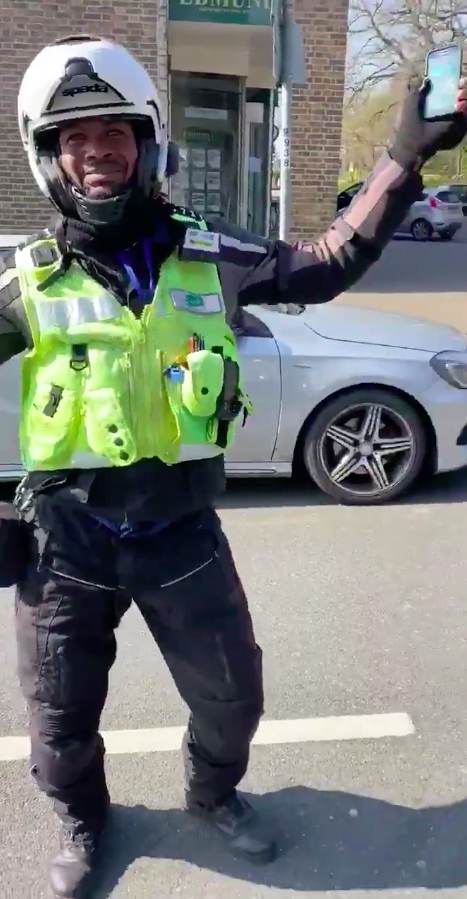 Ben, who runs a carpet cleaning firm, saw the man dishing out fines on people's cars despite the coronavirus lockdown requiring that only essential workers leave their homes.

He said he pleaded with the attendant to not give the fine but he just ignored him and started dancing.

Ben said the attendant's actions enraged him and he "lost it" when a man in his 70s then came out of a pharmacy with boxes medication he said was for his wife.

In the video, Ben said: "Look at this f***ing dog. Happy as f***ing larry giving people parking tickets when there's a crisis out there."

The attendant replied: "It's not my problem."

Ben shot back: "You're a disgrace. F***ing disgrace. Do you know that?"

Ben, 40, finished by saying: "You're a disgrace mate. There's a crisis out there and you're giving people parking tickets."

Referring to the incident Ben, who is currently delivering vegetable boxes to people in need during the lockdown, said: "It broke my heart. My language was a bit over the top but everyone is emotional.

"I couldn't believe what he did. I was like 'please mate' but he didn't care. He was dancing. I said 'for Christ sake come on'. And that's when I lost it and said 'you are a f***ing disgrace mate'.

"Why can't these people be volunteers for the NHS?

"What got my back up was when he started doing that dance. He was dancing and just thought it was a big joke. The old man wasn't blocking any access – just trying to get his wife her medication."

After uploading the video on Twitter, the dad-of-three was inundated with messages of support.

One person wrote: "Why is he not in isolation? Hardly a key worker. Disgusting behaviour."

And Wayne Miller wrote: "Surely this isn't essential work and he should be fined himself for not self isolating."

However others pointed out the attendant was simply doing his job.

Sun Online have contacted Bromley Council for a comment.

a, dances, moment, parking, Warden:
You may also like:

Britain's rudest postman is caught on camera during SECOND rant