What are EWE waiting for? Moment sheep is spotted outside lift inside Premier Inn after wandering through hotel lobby

This is the hilarious moment staff at a hotel spotted a sheep wandering outside the hotel life.

Footage emerged from Premier Inn’s Holyhead hotel, in Holyhead, north Wales, of a sheep wandering around the floor inside the building.

The sheep, nicknamed Sidney by staff, was ushered back outside after it let itself into the hotel through the electric doors. 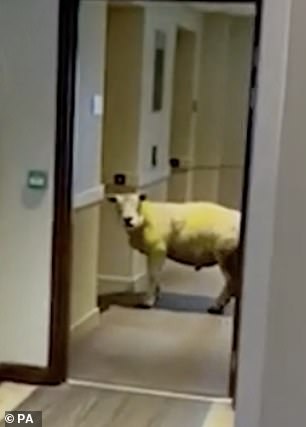 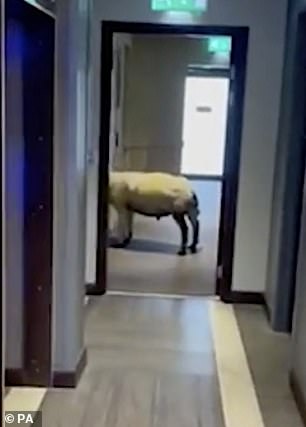 Footage emerged from Premier Inn’s Holyhead hotel of a sheep, nicknamed Sidney, standing outside the lift after the animal had let itself in through the electronic doors in the lobby

The video shows the lobby of the hotel and the camera turns to show the animal standing through a door.

Comically, the sheep looks like it’s a guest waiting on the lift to take it up to its room, after wandering through the lobby.

The animal turns to face the camera as the person taking the footage says: ‘Oh my God’ at the scene.

‘The team were rubbing their eyes when Sidney strolled in. It was a bit like a weird dream,’ Linda Pritchard, duty manager of the hotel, said.

‘Sidney’s quite been the talk of the town and no one in any of the Premier Inns across the UK has ever heard of anything like this before.

Staff at the hotel said that Sidney is now back to its field after the incident.

L., moment, Outside, sheep, spotted
You may also like: