The Jeremy Corbyn-backing campaign group Momentum have been slammed after posting a mocking video comparing Frank Field to David Brent from TV’s The Office.

They posted the mocking clip just hours after the veteran Labour MP announced he was quitting from the parliamentary party over the anti-Semitism scandal.

Mr Field has been an MP for 39 years – first entering Parliament when Margaret Thatcher swept to power in 1979 – and has been a leading campaigner in tackling child poverty. 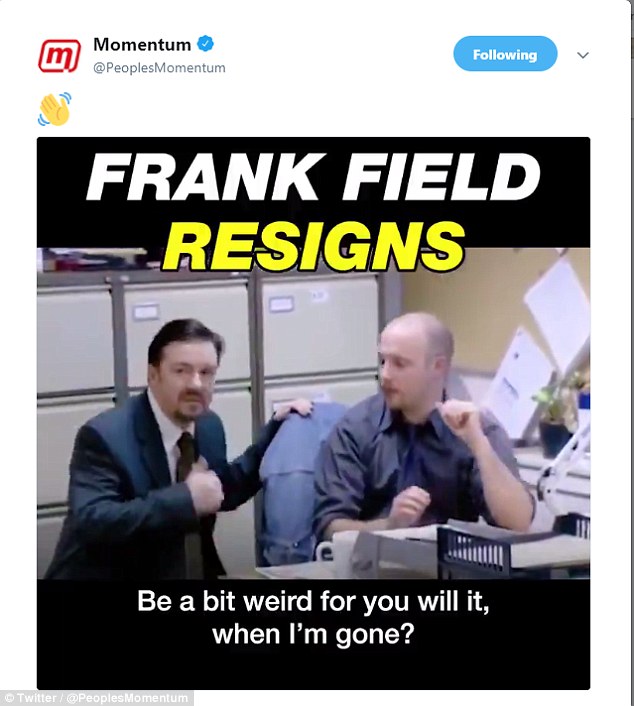 In the mocking clip – titled ‘Frank Field Resigns’ David Brent talks to a disinterested employee about his departure and urges him not to feel too down about it.

Tapping the man on the shoulder, he says: ‘Be a bit weird for you will it, when I’m gone?’

When the employee shrugs and says it will be a bit different, Brent interjects, pompously saying the place will be ‘sadder’ but that the staff should not think here is ‘no point’ not he has gone.

But while the clip tweet has been tweeted more than than 280 times, it received a barrage of criticism in the replies from critics who said it is in poor taste to sneer at the loss of a Labour MP. 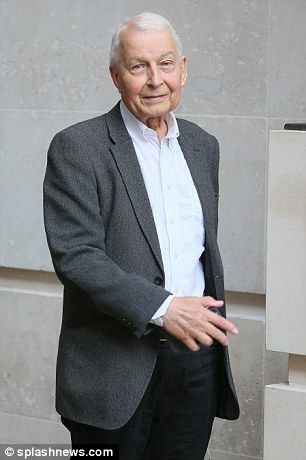 Labour MP Gloria De Piero hit back on Twitter: ‘Are you being serious? Are you seriously saying that you couldn’t care less that a Labour MP has resigned the Labour whip?’

‘How is this unhinged nastiness going to persuade the public to go for a Corbyn govt?

‘If they treat their friends like this… remember Field nominated Corbyn, praised him & helped make him leader. Petty, vicious & self-defeating stuff.’

Ex Labour MP Tom Blenkinsop said the video was reminiscent of the attitude of the far-left Militant group who tried to take over the Labour party in the 1980s.

He wrote:  ‘Further and further away from power. Militant revisited, in all but name.’

But Momentum brushed off the criticisms, with a source telling MailOnline: ‘It was a meme from The Office, and we apologise for any offence David Brent may have caused.’

The row comes as Mr Field is set to have a meeting with labour chief whip Nick Brown about his decision to quit.

Mr Field has said he intends to stay on as a Labour party member but not part of the Labour Party bloc in Parliament.

But this is not allowed under party rules, which says he must either quit or face being expelled within two weeks. 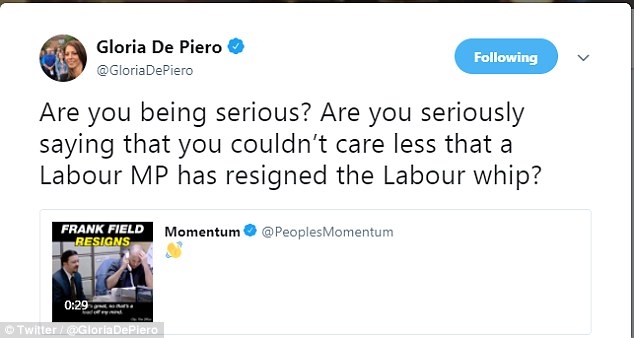 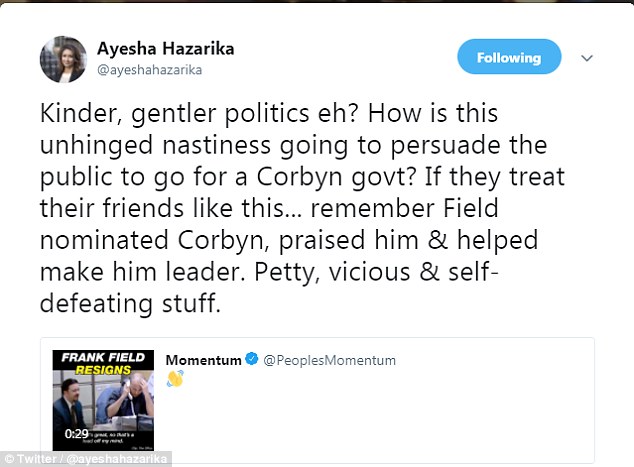 A former adviser to Ed Miliband and Harriet Harman also slammed the video, pointing out it made a mockery of Jeremy Corbyn’s insistence that he wanted to usher in a new era of ‘kinder gentler politics’

He revealed today he is considering quitting the Commons immediately to fight a by-election as an independent Labour candidate.

Expulsion as a Labour member could force Mr Field’s hand and push other MPs to consider their own future in the party escalating the crisis for leader Jeremy Corbyn.

It comes as leading Labour moderate Mike Gapes said he could also quit the party whip over the anti-Semitism scandal.

He said he feels ‘tainted and sickened’ by the failure to tackle the racism and that he is ‘agonising’ about what to do next.

Labour MP Wes Streeting warned the Labour now faces a ‘catastrophic’ split as others will follow Mr Field and quit.

Jeremy Corbyn has dismissed Mr Field’s resignation in a terse 12-word statement while sources close to the leader claimed the veteran MP had been looking for an excuse to quit before sacked by his local party.

In full: Frank Field’s letter resigning from the Labour Party

Birkenhead MP Frank Field has written to Labour chief whip Nick Brown tendering his resignation from the party. This is his letter in full:

I am writing with considerable sadness to inform you of my intention to sit as an Independent Labour Member of Parliament. I am resigning the whip for two principal reasons.

The first centres on the latest example of Labour’s leadership becoming a force for anti-Semitism in British politics. The latest example, from last week, comes after a series of attempts by Jeremy to deny that past statements and actions by him were anti-Semitic.

Britain fought the Second World War to banish these views from our politics, but that superhuman effort and success is now under huge and sustained internal attack. The leadership is doing nothing substantive to address this erosion of our core values. It saddens me to say that we are increasingly seen as a racist party. This issue alone compels me to resign the whip.

The second reason is that a culture of intolerance, nastiness and intimidation now reigns in too many parts of the Party nationally and is sadly manifest within my own Constituency Labour Party (CLP) in Birkenhead. This is, I fear, just one example of a phenomenon that has tightened its grip on CLPs across the country and is being driven, in part, by members who in previous years would never have been able to claim Labour Party membership.

My original submission to the Party on a specific bullying issue goes back eighteen months. Many submissions have since come from me as well as from loyal Party members. No decisive action has been taken. At best, the Party’s failure to act on these numerous complaints about the thuggish conduct of some members demonstrates a wilful denial. At worst, it serves to legitimise appalling levels of bullying and intimidation of lifelong Labour supporters.

You know that I wrote to the Labour Party nine months ago about the atrocious behaviour of the then councillor Louise Reecejones. That Ms Reecejones should not be a member of the Party, let alone represent us in public positions, has been underscored by decisions taken by Wirral Council.

As you know, she was found guilty of using her position as a councillor to intimidate members of the public. She has refused to apologise properly for her behaviour, and for breaching the Council’s code of conduct, even though one of those on the receiving end of her attack has only now a precarious hold on their livelihood.

The charge sheet against this individual’s suitability ever to hold office, let alone represent the Labour Party, has been detailed to you in separate correspondence. While she was withdrawn as a Council candidate in Wallasey, she has still been able to join the Party’s shortlist for another seat and continues to hold an official position within the local Party.

I intend to continue to represent Birkenhead in Westminster, as I have had the honour to do so for almost 40 years, and I will continue to do so as an Independent Labour Member. I shall of course remain a Party member as I have been since 1960. The values I have espoused during this time will be same that will continue to govern my conduct and I also intend, providence willing, to represent those views when the next election is called.

Few events would give me greater pleasure than to apply to the Parliamentary Labour Party for the whip. But great changes in the leadership’s stance on the issues outlined in this letter will need to take place before I will be able to do so.