A month’s worth of rain in a DAY: Three-inch downfall will soak Britain (with 60mph winds to make it really horrible) but we might just be through it in time for the bank holiday

Parts of Britain face a month’s worth of rainfall today as much of the country endures a soggy start to the week.

Storms bringing torrential rain and gusts of up to 60mph are set to batter areas the UK throughout the day – and heavy rain could even turn to snow in higher parts of England, where temperatures will plummet to 0C (32F).

The Met Office has issued a weather warning in the South East for the whole day, saying the torrid conditions could cause flooding, power cuts, damage to trees, delays to trains and buses and shut roads and bridges.

Temperatures will also remain low with a high of 8C (46F) forecast for London, 12C (54F) in Manchester and 6C (43F) in Norwich. However there will be bright spells in the West Country and West Wales. 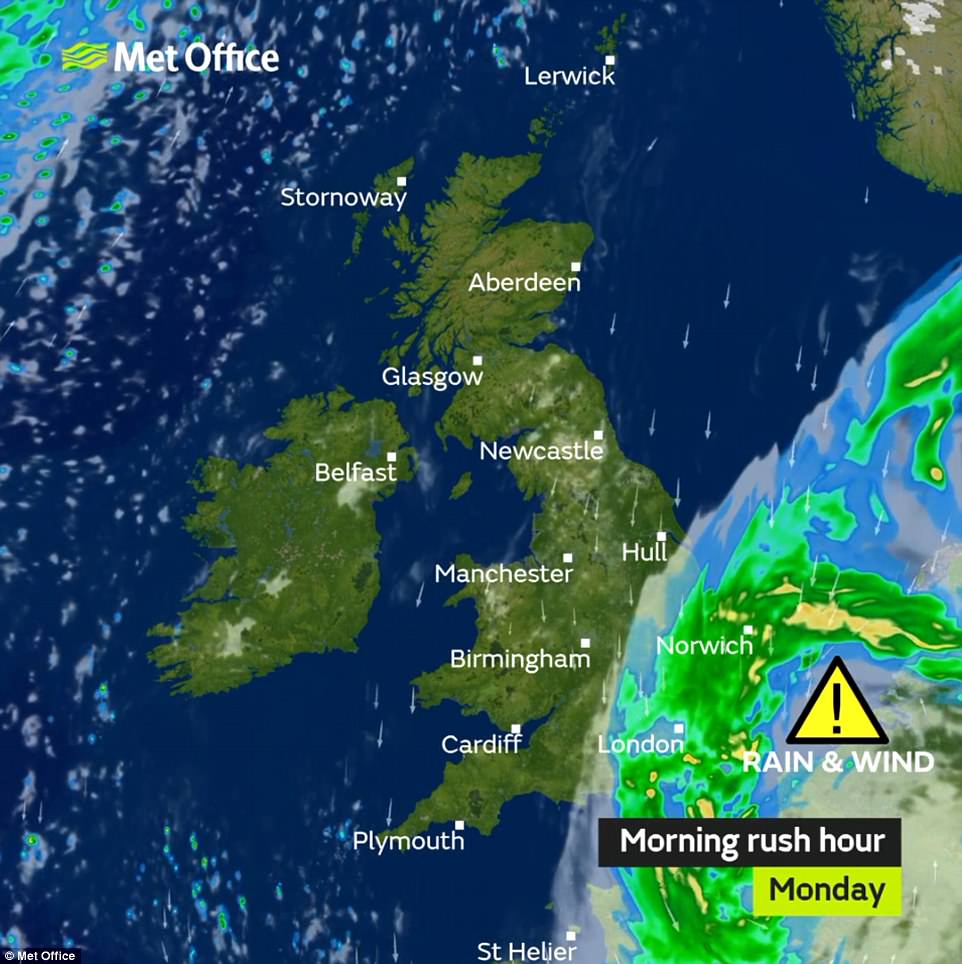 The North Downs between Kent and Surrey could see between 60mm (2.4in) and 80mm (3.1in) of rain, compared to the entire April monthly average for the area of 50mm (2in).

As well as rain, Eastern regions will be hit by unusually strong gusts of between 40mph and 50mph, peaking at 60mph on the coast. The Monday misery is being caused by a storm system moving north over France.

Network Rail warned that severe weather could result in train services running across the Southern, Southeastern, Thameslink and Gatwick Express networks being cancelled, delayed or revised.

Horsham to London Victoria via Dorking services are expected to be affected due to a 5mph speed restriction through the Holmwood area of Surrey which suffered a landslip two weeks ago.

Network Rail said it has been ‘proactively working through the night and will continue working throughout the day to ensure pumps and drainage are in place and in full working condition’.

Meanwhile on the roads, there were severe delays on the M6 southbound at Sandbach service station in Cheshire following an accident.

‘Strong winds will also lead to large waves and spray in exposed coastal areas and we encourage people to take care in these locations. We expect some travel disruption during Monday morning’s rush-hour. 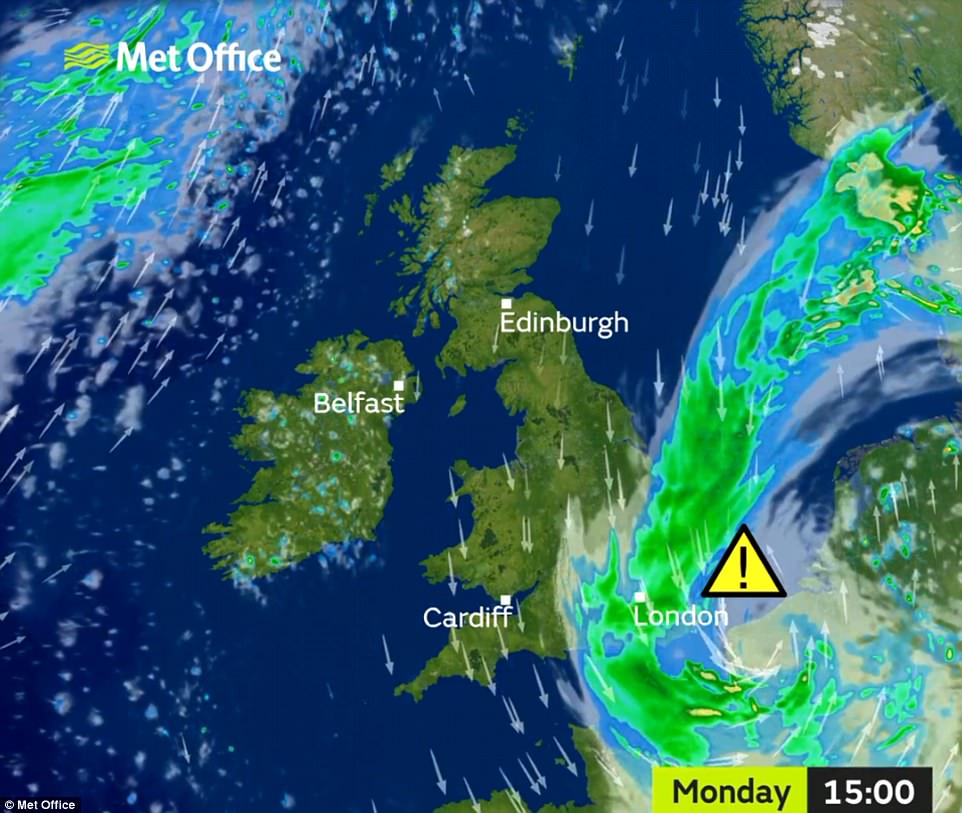 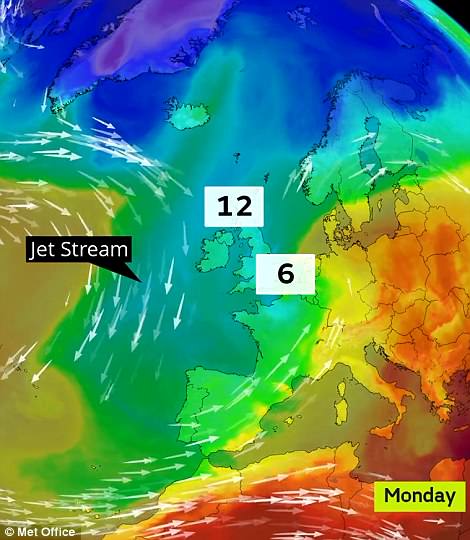 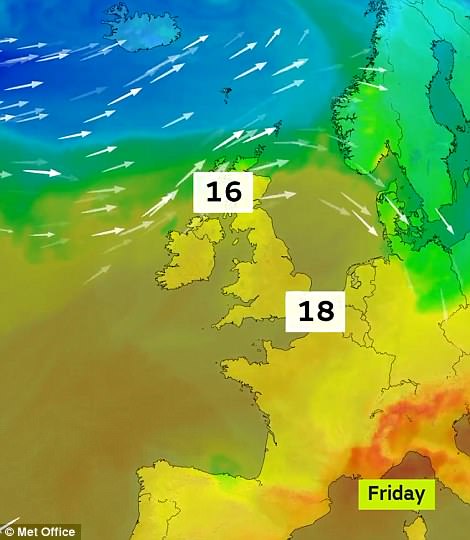 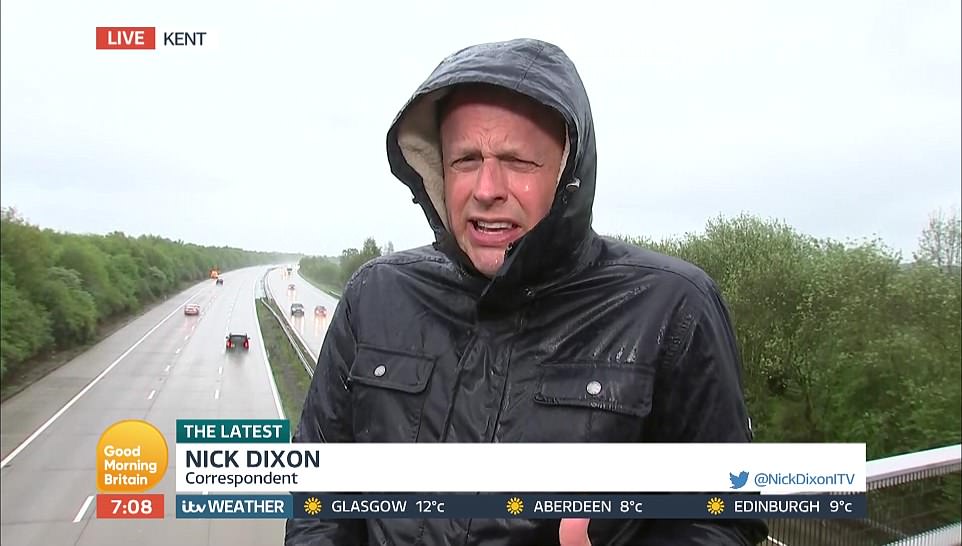 ‘We advise people to listen to their local radio stations and remember not to drive through flood water as just 30cm (1ft) of fast flowing water is enough to move your car.’

Temperatures will climb through the week, with highs of 14C tomorrow and on Wednesday – with the prospect of a sunny Bank Holiday weekend.

Met Office forecaster Greg Dewhurst said: ‘It will be a wet start to the week, leading to a very difficult morning commute in the South East. We could see localised flooding across this area, with a chance of wet sleet and snow over the high ground as well.

‘But for the rest of England and Wales, it’s a completely different story, with dry and bright conditions in the West Country and West Wales. Tomorrow we’re looking at a bright day with scattered showers.

‘The rest of the week should be sunny with highs of 18C (64F) on Friday. There is a good chance of pleasant sunny spells across the Bank Holiday weekend.

‘Although it won’t feel like the heatwave we had earlier in the month, temperatures should stay in the high teens, meaning it will be a very pleasant weekend for most.’

Today’s bad weather marks a dramatic change from the glorious April heatwave just over a week ago which brought record temperatures and saw thousands flock to beaches.

On April 19, 29.1C (84.3F) was recorded in St James’s Park, London, making it the hottest April day since 1949. The hot spell was caused by low pressure over the Atlantic and high pressure over western Europe drawing warm air to the UK.

British SKY-les: Cloud looking like a map of the United Kingdom spotted above Devon

A cloud looking like a map of Britain was spotted hovering in the skies over the weekend.

Amanda Darke snapped a photo of the unusual formation when she was driving in Devon on Saturday evening at 7pm.

Ms Dark was so thrilled that she jumped out of her car while travelling between the villages of Diptford and Morleigh. 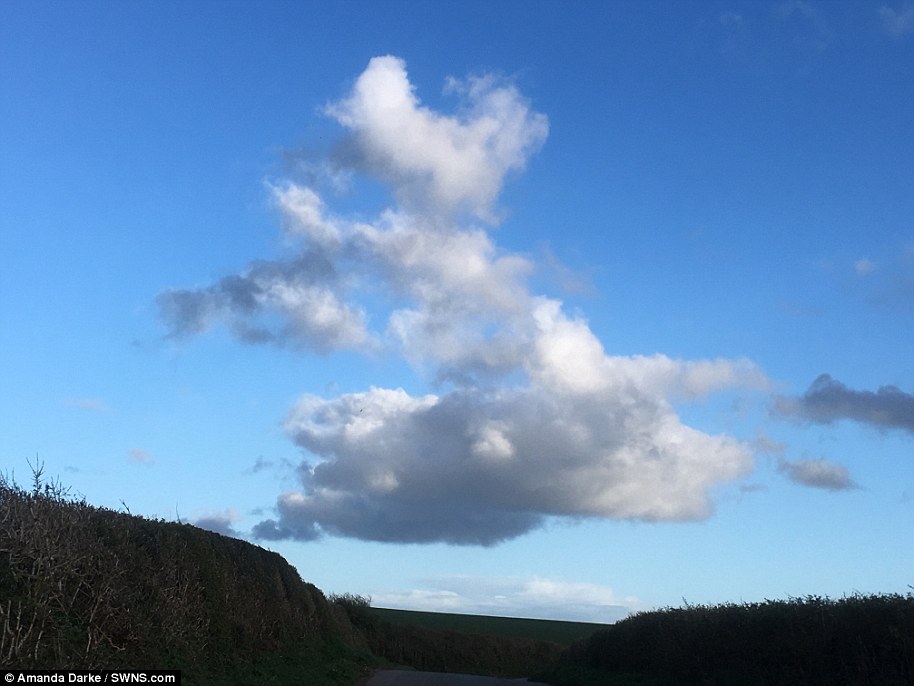 The 58-year-old said: ‘The cloud was a perfect shape of the UK and I knew I had to act quickly before it dispersed.

‘I jumped out of the car and took a couple of pictures. My mum was driving us and I saw it in the sky.

‘I just said “quickly stop the car” as I wanted to take a picture of it. I was so thrilled by it.

‘I just looked up and it presented itself. I couldn’t believe it. I just knew if I didn’t get it then I would never see anything like that again. It was lucky I was a passenger and able to spot it.’ 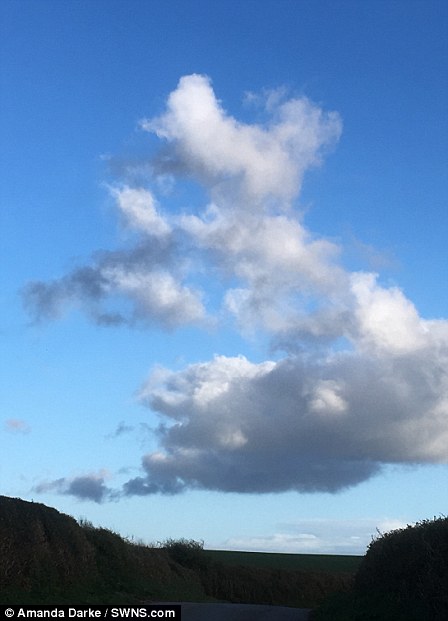 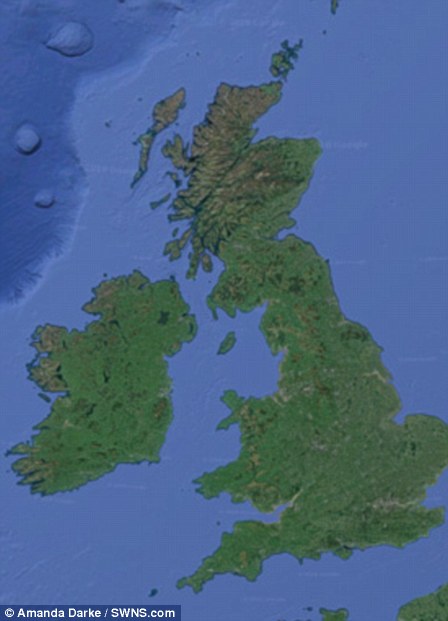 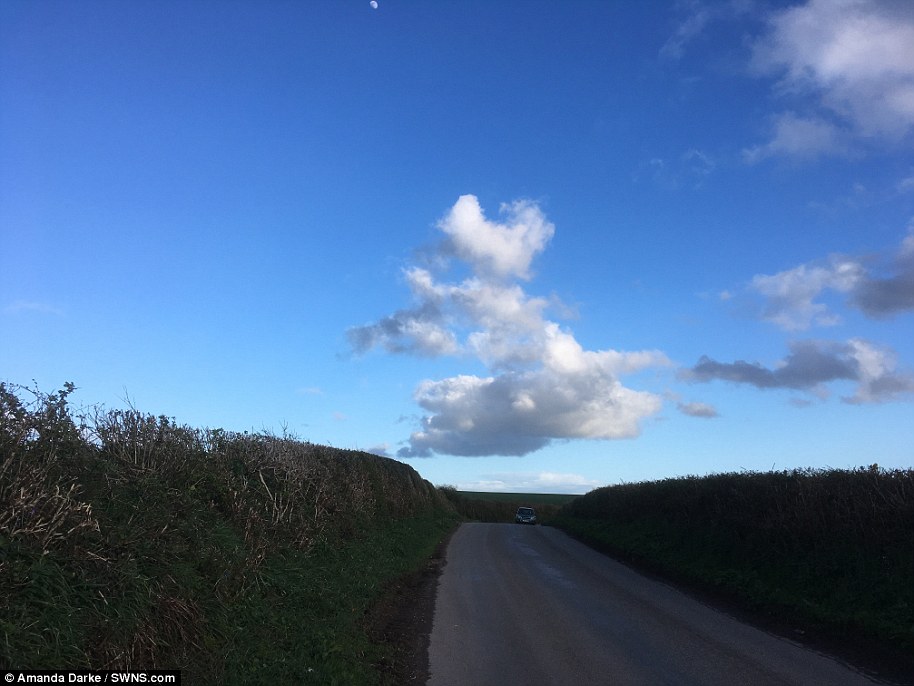