The account by our United States correspondent Matthew Knott telling how he fell from the rooftop of an apartment building in June prompted similar tales of horror from readers.

Writing in Good Weekend, Knott told ​how one minute he was gazing at the Manhattan skyline, the next he was plummeting five storeys to an almost certain death. 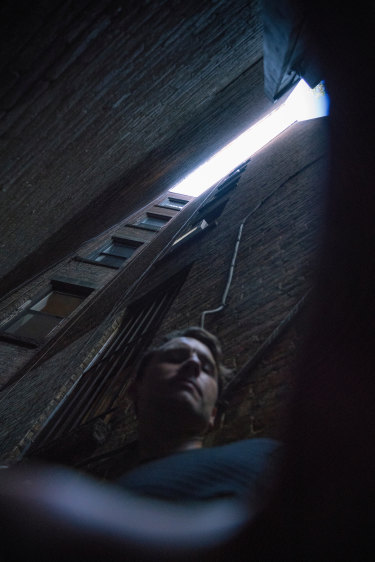 At the bottom of the air shaft: “I knew I was alive, but I was terrified of what I’d done to myself,” Knott says of the moment after his fall.Credit:Ben Sklar

Friends had gathered for drinks on the roof and he thought he would take a quick look at the city but instead of walking across the flat surface he stepped into an air shaft: a narrow gap designed to allow light and ventilation into adjacent buildings.

Perhaps it was his words: "When you fall from such a height, you have enough time to realise what is happening to you", that triggered similar memories.

Chris Green, 40, an education assistant from Venus Bay, Victoria, said he had a very similar experience travelling in Morocco about 15 years ago with his fall broken by a lower balcony. 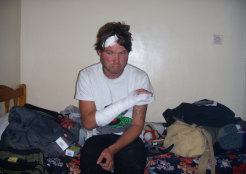 Chris Green after being treated for his injuries after falling from a roof in Morocco.

"I got locked out of my hotel room and was walking across the roof from my friends hotel two doors down," he said. "I was walking, I wasn't drunk, over the wet, dark rooftop terrace four storeys up when the ground suddenly disappeared under my feet.

"Time slowed right down as I was falling and I remember thinking that I was about to fall right to the ground. Luckily for me I landed on a balcony in a pile of rubbish, inches away from an upturned metal frame that would have impaled me.

"The shock numbed the pain of my broken fingers and arm and the gash on my forehead. I had been stranded in a small desert town due to a transport strike and the tiny medical centre didn’t even have the plaster for my arm – the only other patient was a baby who died right in front of me with his mother wailing in anguish and nurses trying to comfort her.

"I had to wait three days for buses to start running again until I could travel to the nearest hospital, three hours away, to have a cast put on my arm. I will never forget that feeling of falling and not knowing how far – and the distance between myself and friends and family back home. It certainly does make you realise how the fragility of our existence and how it can be taken away so quickly."

Sarah Arnold said she had a similar experience to on the Greek island of Milos. "It was a beautiful place with white sand beaches and limestone caves," she said. "Down at one beach I had walked a little way into one of the caves to see what I could see.

"Just as I was far enough in that it was becoming properly dark, I stepped into thin air. In the split second as I fell I recalled an offhand comment that the car hire man had made about mining in the area and I thought I was falling down a mine shaft.

"As it turned out I only fell about a metre and wasn't hurt at all except for a bruise or two. But it was absolutely terrifying falling straight down in the dark like that and I've never forgotten it. Your story brought that horrified feeling of nauseous terror rushing back."

Sophie Cleland in a comment to the Good Weekend story said nearly 30 years ago she had a similar incident which changed her life.

"After four months of recovery I spent a year working through why I lived what was my purpose. The journey led me back to education and a new career. It made me want to give more, be more and do more."

More, of, rooftop, Stories, t, When
You may also like: