Mother, 33, who stabbed her cheating boyfriend jailed for 20 months

Mother, 33, who stabbed her cheating boyfriend after she found out he was seeing one of her friends behind her back is jailed for 20 months 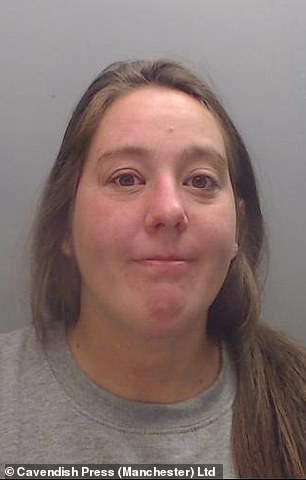 Rachel Tinsley, 33, stabbed Mark Donnelly twice as they argued at their home in Warrington, Cheshire

A mother of one who stabbed her unfaithful boyfriend after she found out he was cheating on her with one of their friends has been jailed.

Rachel Tinsley, 33, stabbed Mark Donnelly twice as they argued at their home in Warrington, Cheshire, after she found out he had been cheating and had ripped up some of her clothes.

Donnelly, 34, initially thought he had been punched during the 3am row. Quickly he realised he had been knifed when Tinsley pulled the blade out his chest before stabbing him again in the shoulder.

Despite his wounds, Donnelly escaped to a nearby phone box to call emergency services and was taken to Aintree hospital. He spent five days there, where he was treated for a punctured lung and severe nerve damage to his thumb, which was slashed by Tinsley.

Trainee hairdresser Tinsley was arrested at the couple’s flat and arrested on suspicion of attempted murder.

She pleaded with officers: ‘Has Mark called the police? Has he said I tried to kill him?’ but gave no comment to police during the interview.

Tinsley was charged with wounding with intent to cause grievous bodily harm at Cheshire Crown Court, but her guilty plea to the lesser charge on unlawful wounding was accepted and she was jailed for 20 months.

The pair have forgiven each other are back to being romantically involved.

The court heard the couple’s four year relationship had been blighted by violence and arguments.

The latest incident occurred last October 30, after the pair returned from a holiday to Majorca. 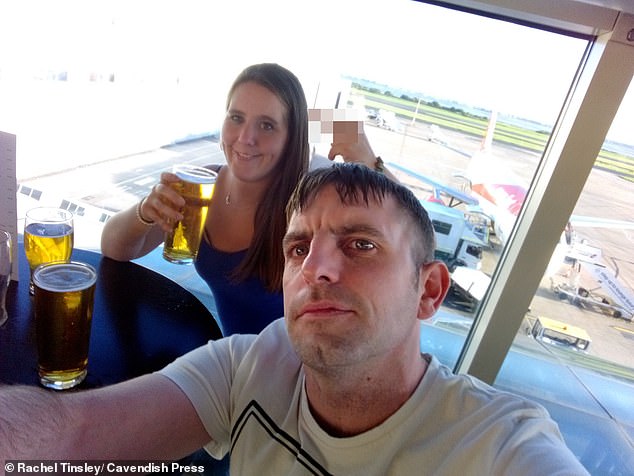 Prosecutor Simon Duncan told the court Donnelly had been at home drinking and had damaged a mirror and some of her clothes before he grabbed Tinsley’s arm.

Mr Duncan said: ‘They were in the kitchen and she pulled a knife out and stabbed him.

‘He thought he had been punched in the chest until she pulled it out and then put it in his shoulder. He lifted his arm to stop further attacks and she cut his thumb.

‘He then called the police and asked them for help. He said that he had been stabbed by his girlfriend and when the police arrived, he was drifting in and out of consciousness as he had lost a lot of blood.’

Donnelly initially refused to provide police with a statement and insisted Tinsley’s actions were ‘out of character’, the court heard. His injuries were so severe that he struggled to look for work. 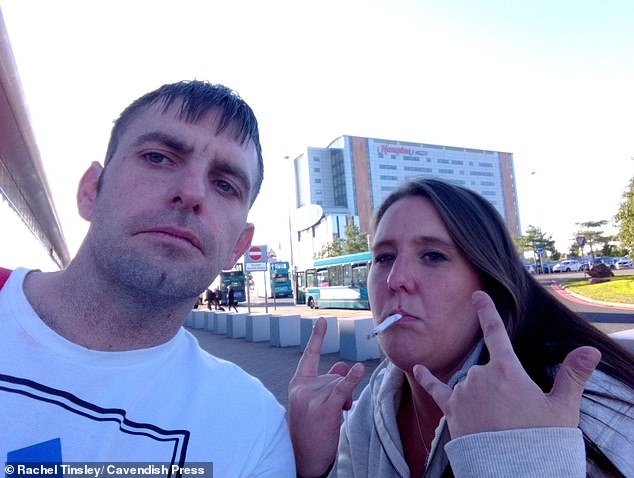 Rachel Tinsley and her partner Mark Donnelly have a daughter together

Tinsley has a string of offences on her record, including an assault on Donnellywhere she threw a food carton at his face during another row.

She was also convicted of a hate crime after she used homophobic language against a transgender nurse.

Her lawyer Simeon Evans said: ‘This, in many ways, is a very sad case because Rachel Tinsley came from a background that would not indicate that she would end up here. Her mother holds a position of great responsibility which I won’t say in open court.

‘Having met Mr Donnelly, it’s clear that their relationship has been difficult. There has been violence on both sides and he has been convicted for assaulting her too.

‘She has a daughter, but the girl’s father has – quite rightly some would say – become involved and she has now lost custody of her. She has also lost her accommodation so the only option available to her was to live with Mark Donnelly in his flat.

‘He had access to her bank cards and helped himself to money from her account. Rachel Tinsley has felt that she had nowhere else to go and he has made frequent threats to kick her out.

‘On the night in question, they were arguing about an affair he was having with somebody who she thought was her friend. She came home and foolishly lashed out in the way that she did. 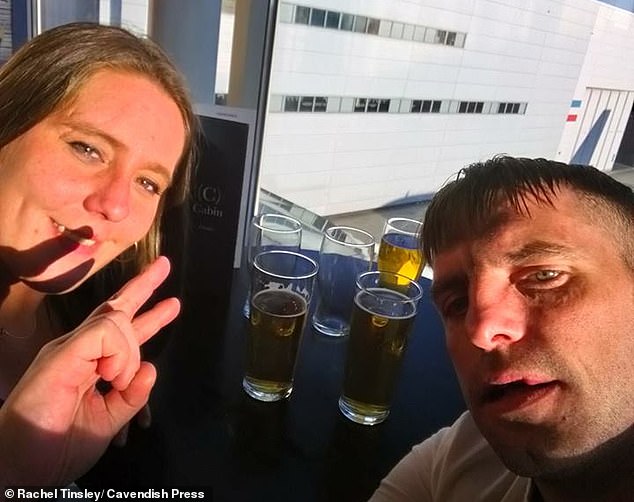 ‘She hasn’t tried to over-egg the pudding by using the grabbing of her arms as a defence – which technically is an assault.’

Sentencing the judge Miss Recorder Louise Brandon, said: ‘On the night in question, after a night of heavy drinking, you returned to your flat to find Mark Donnelly drinking.

‘An argument began as some damage had been done to your property and, in the course of that argument, he became aggressive and grabbed your arms. You were in the kitchen and you stabbed him with a knife.

‘It’s clear from what I have read in his letter that this is a volatile relationship and you were encouraged not to live with him due to the domestic violence, and it’s regrettable that you did not take that advice.

‘I take into consideration that you found out that Mr Donnelly had been having an affair just before the incident – but you seem keen to rekindle this relationship with him even though it has been destructive for you and your daughter. If you do resume this relationship, you are likely to destroy all the good you have done since then.’

Queens woman struck and killed by driver while crossing the street

Frustration grows for B.C. man with terminal illness who hasn’t seen his wife in 2 years

Takeaway shops soar in areas with the worst obesity