Mother Nature’s most wonderful moments of 2018

These stunning images capture the highlights of the year’s best wildlife from Cater’s News Agency Best Nature photos of 2018.

From the depths of the African savanna to the freezing wastes of the arctic, 2018’s photos feature some of the most remote places on earth and some of nature’s most fearsome predators.

One set of images show a shark bursting through a sardine bait ball off the coast of South Africa while other dramatic pictures taken from under the water show the battle between sharks and gannets, both picking away at a giant school of sardines desperate to escape.

Another series of images show the strength of the bond with man and animal. 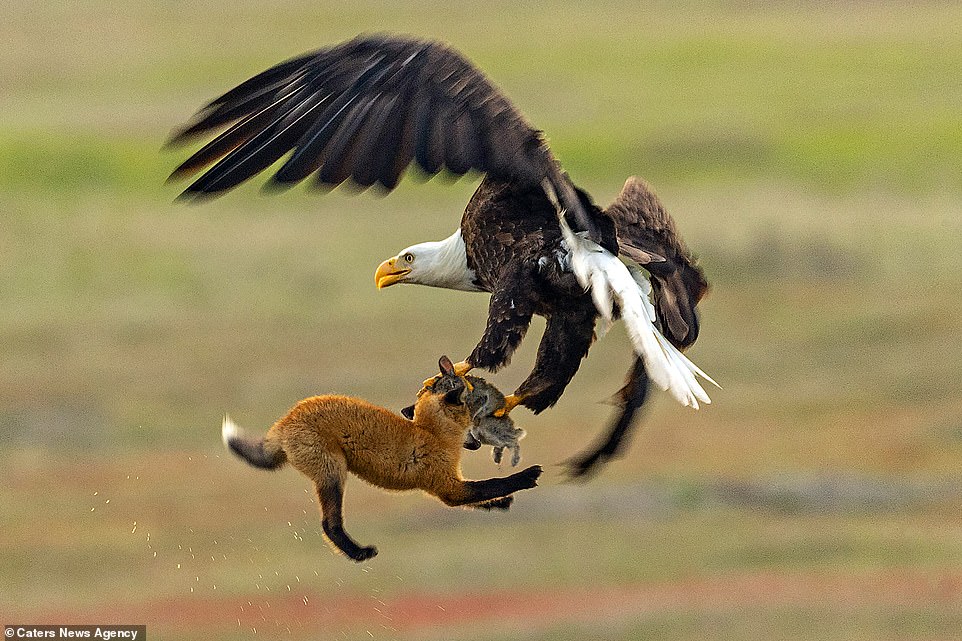 A bald eagle and a red fox tussle in mid-air over a European rabbit in San Juan Island National Historical Park in Washington state. The fight began when the bald eagle attempted to steal the rabbit away from the young fox, known as a kit. When the bald eagle grabbed the rabbit, it inadvertently also caught the fox, lifting both more than 20 feet into the air. Eventually the fox is forced to let go and the eagle flies off with the rabbit in its clutches 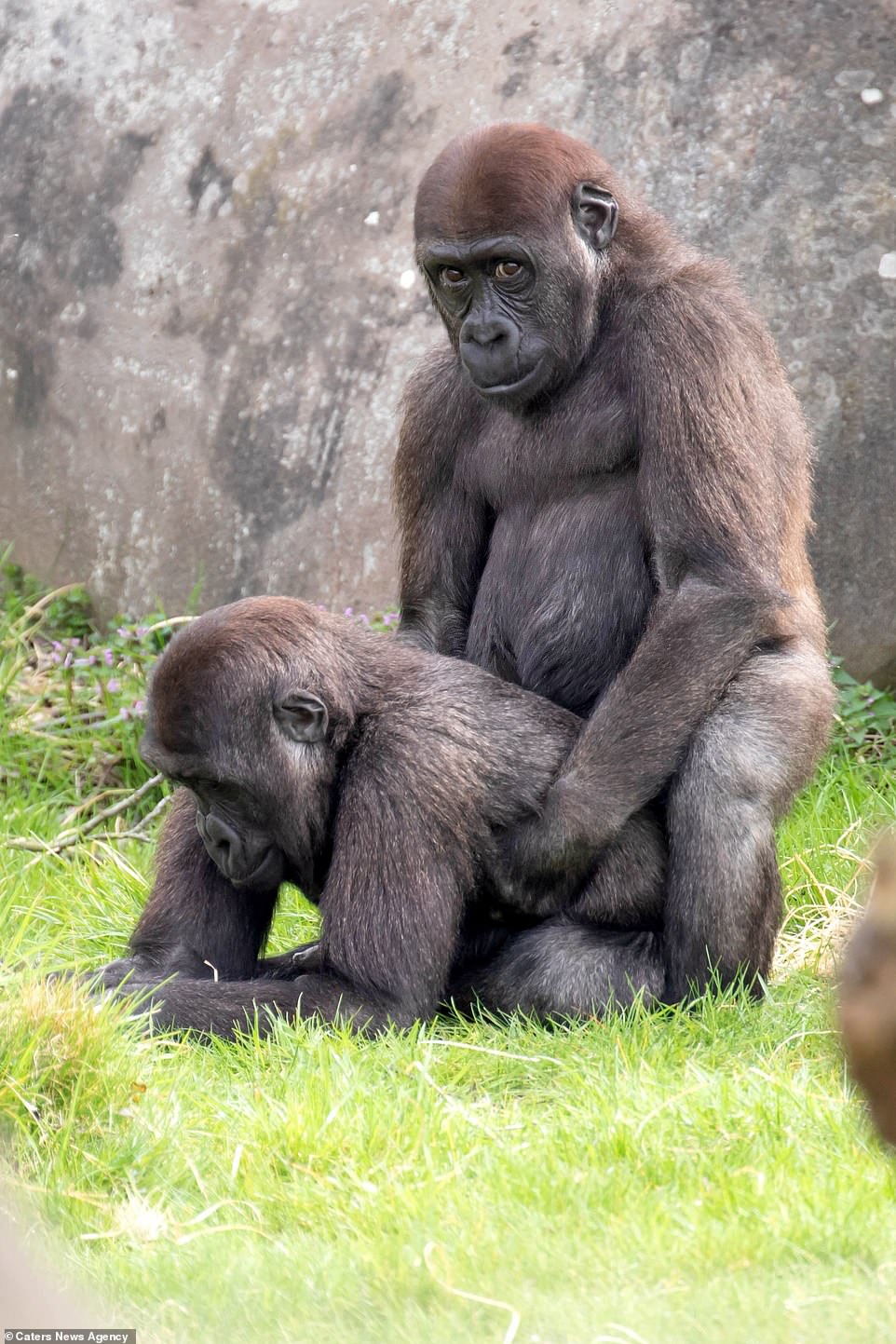 A pair of mischievous gorillas caught sharing an intimate moment in Rotterdam Zoo by an unexpected photographer. Shirley Kroos, 30, was visiting the zoo when she snapped the pair of young gorillas in a somewhat compromising position. The male gorillas who were caught in the act are Aybo, three-and-a-half, and Thabo, three, and are residents at the zoo 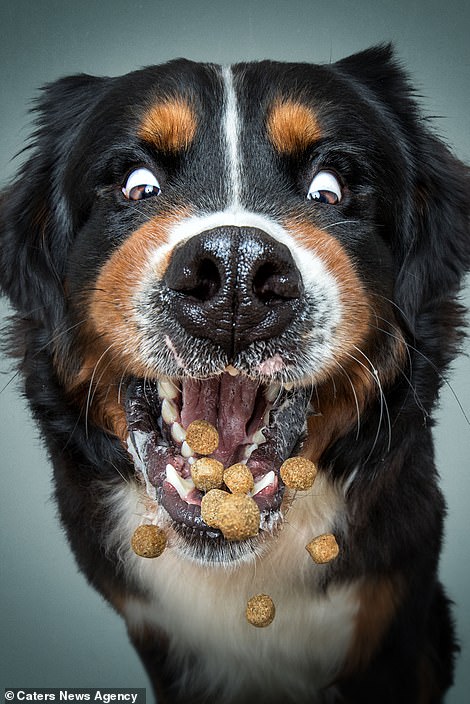 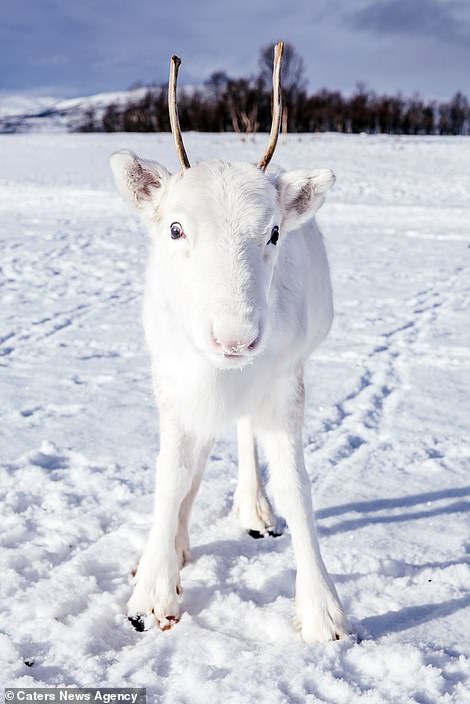 This photo shows the concentrated face of a pooch (left)  just before catching a handful of treats, while a magical encounter with an adorable baby reindeer (right) went viral after photographs of it almost disappearing into the snowy backdrop were shared from Oslo in Norway 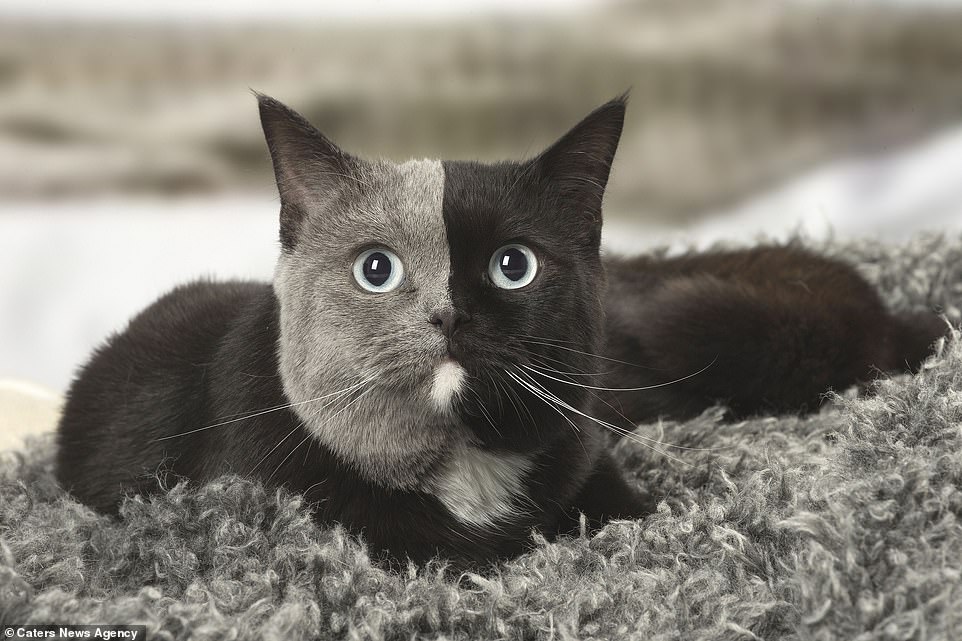 This striking cat, photographed in her owner’s home in France, has a light grey and black face separated down the centre with an almost flawless line. Her unique markings are extremely rare and are thought to be the result of two embryos fusing together – the merging of two nonidentical twins 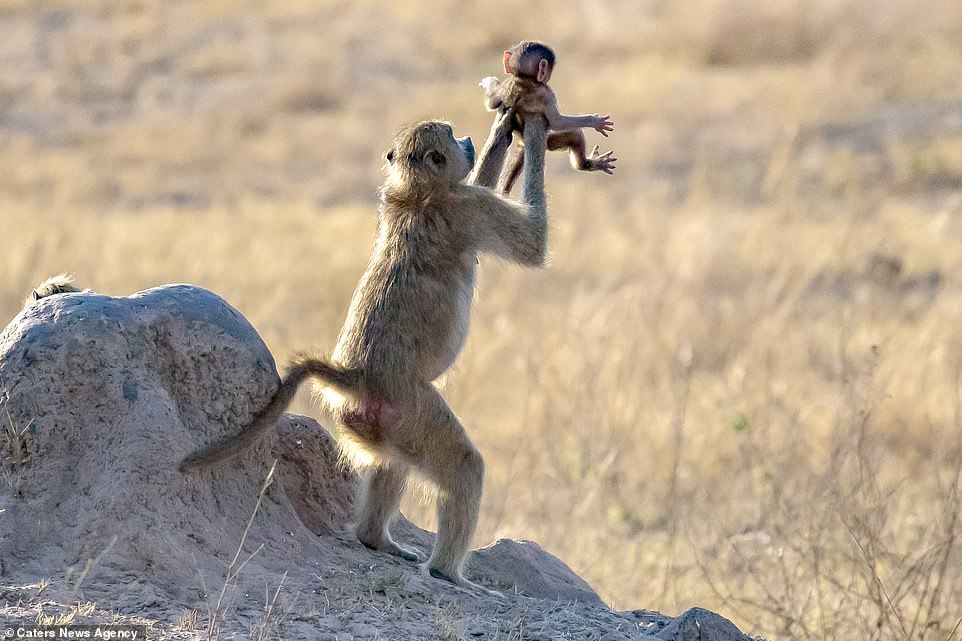 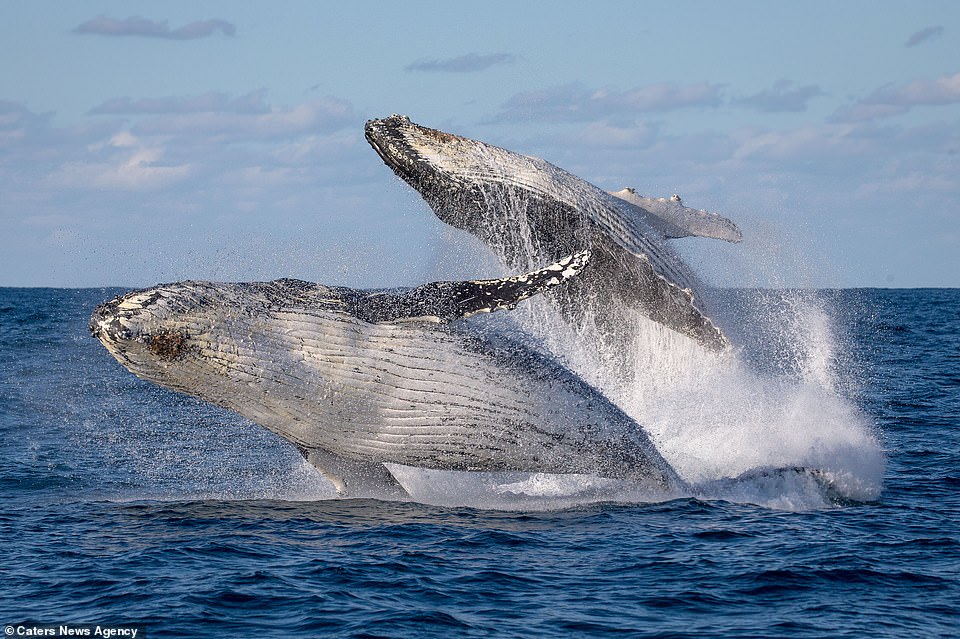 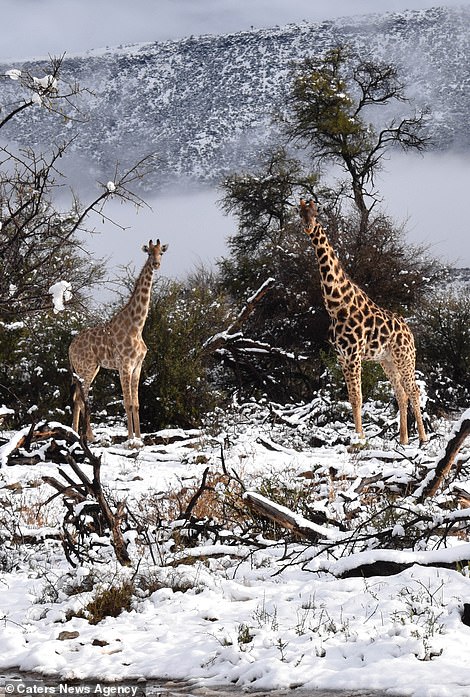 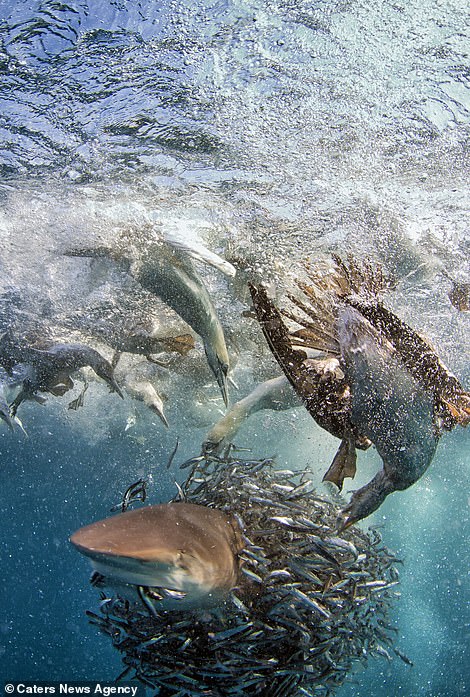 Two giraffes, left, are seen after a snowfall in Sneeuberg on the Western Cape of South Africa/In the same country, a shark is seen bursting through abaitball of sardines as gannets feed from it. This shoal of sardines was packed close together for protection before a hungry shark burst right through the middle. 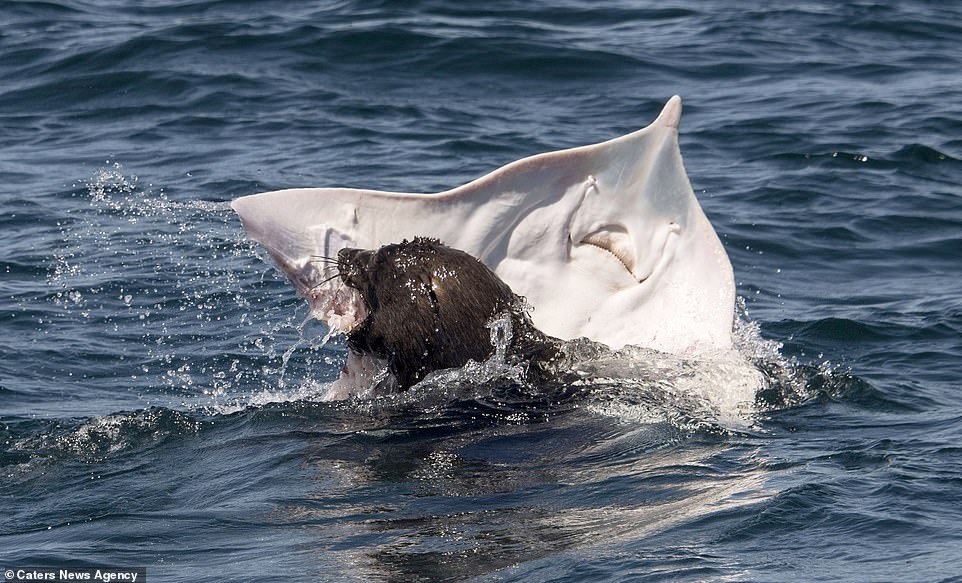 A seal is seen fighting a huge stingray in this picture taken in Cape Town, South Africa. The bull seal was then forced to defend his food from preying seabirds 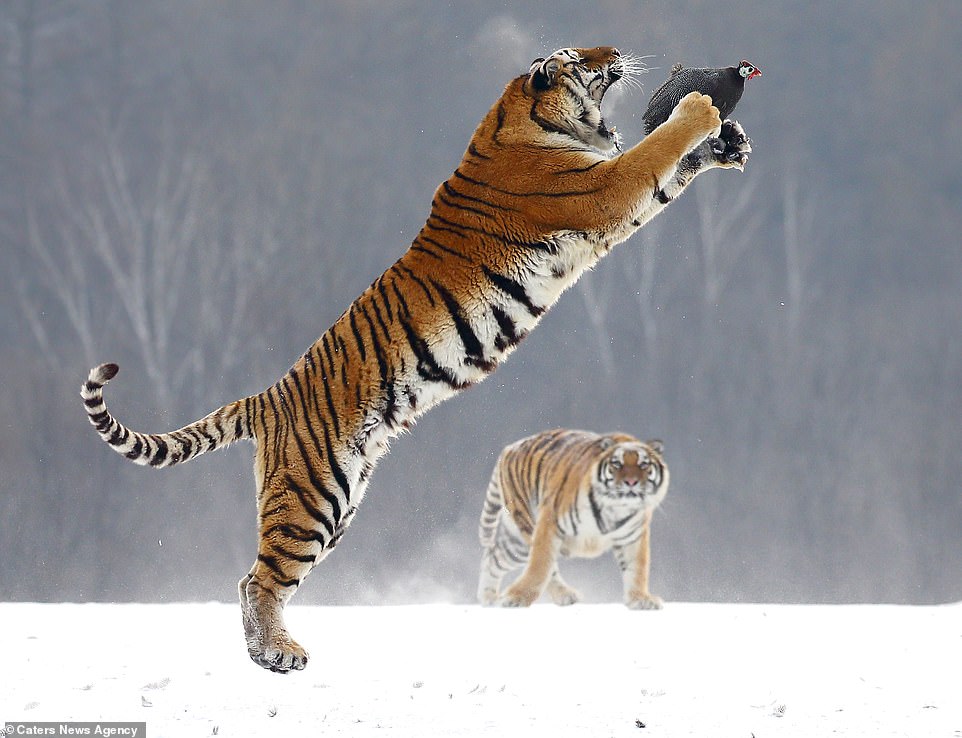 These tigers were spotted in full flight to catch their prey for lunch. Setting their sights on guinea fowl, the powerful predators launched themselves into the air to pluck the birds from the sky. Puffs of feathers fell from the guinea fowl as the tigers caught them with sharp claws in a Siberian Tiger Park in the city of Hanlin, northern China 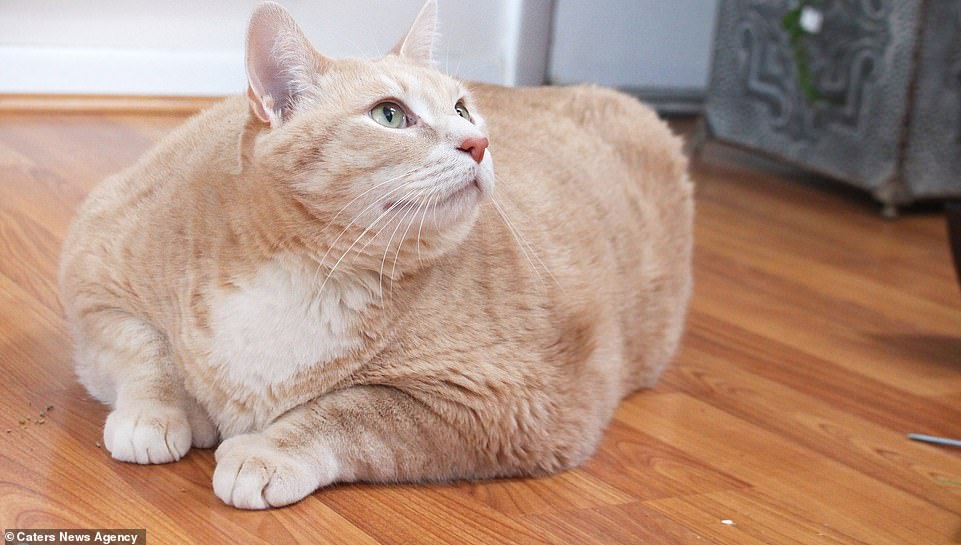 This adorable feline could be mistaken for a real-life Garfield, as he happens to weight a staggering 33 pounds (2.35 stone) 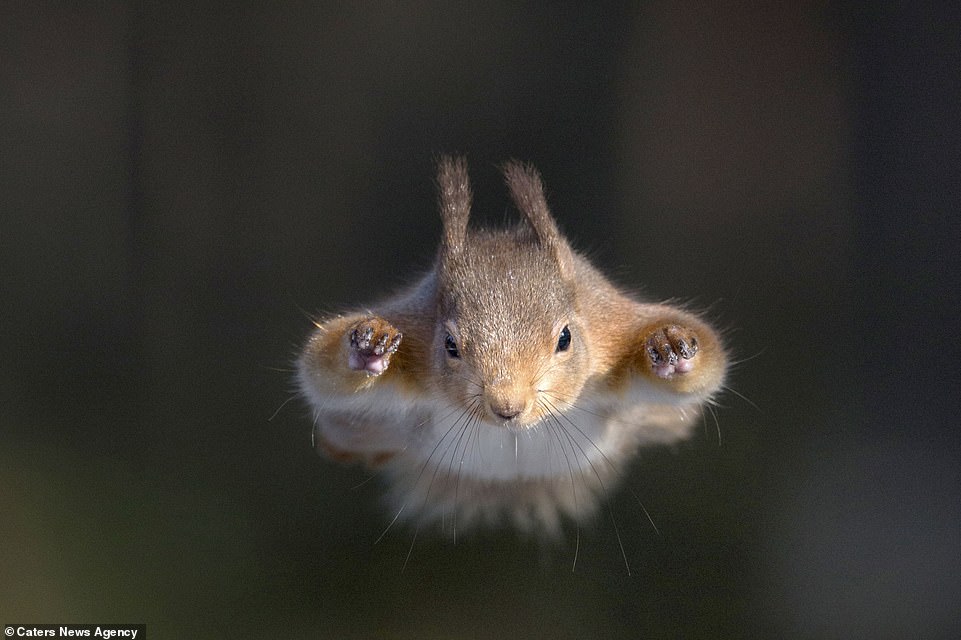 A squirrel perfects the Superman pose while hopping across branches in the Scottish Highlands near Inverness. Each squirrel has its own style for jumping across. Some appear very flat whereas others have their legs and tail going in all directions. The tail is used to help balance the jumps, and is twisted and shaken as the squirrel hurtles through the air 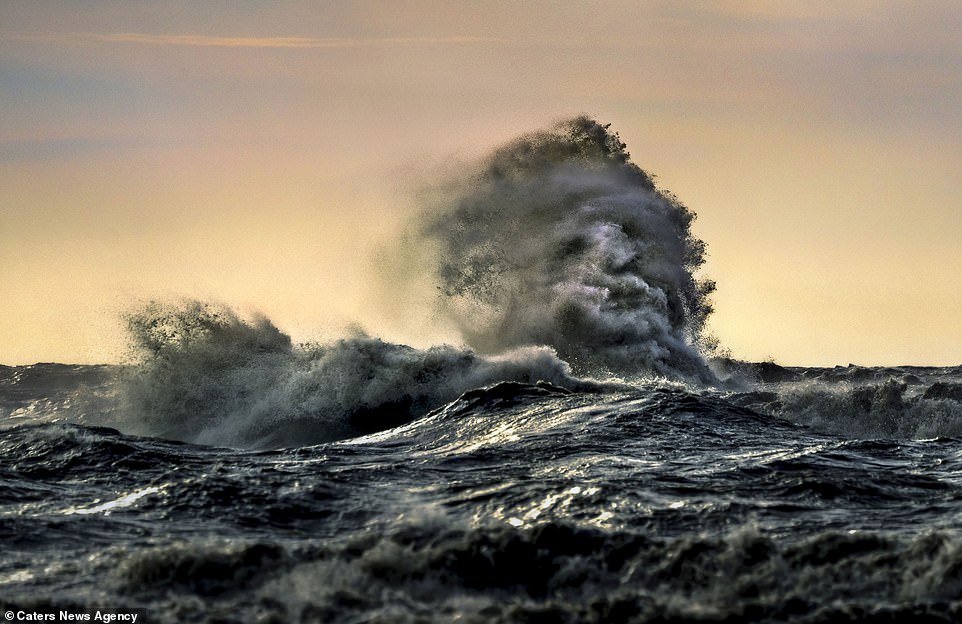 An eerie face appears to emerge from the waves in this extraordinary picture taken ironically on Lake Erie, Canada. As the water smashes together, the obvious features of the face can be seen forming before the picturesque dusk sky 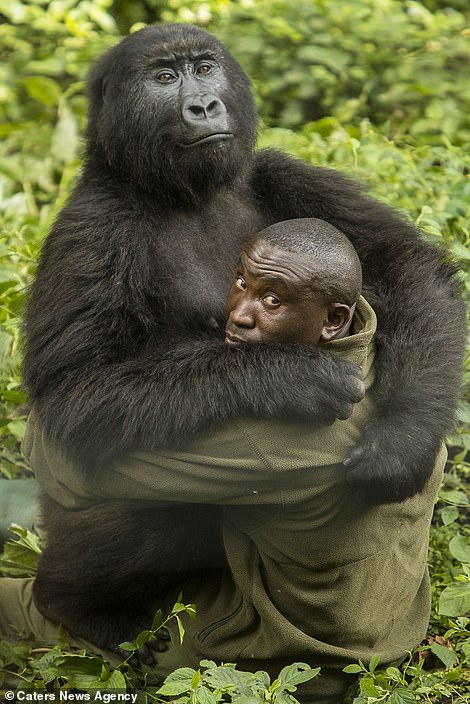 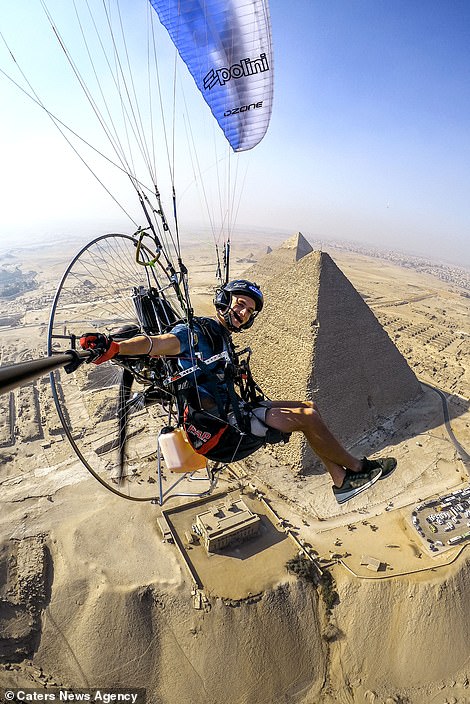 A wildlife ranger (left), who works at Senkwekwe Centre in Virunga National Park, Democratic Republic of Congo has a special bond with the gorillas at the park. Over in Egypt, Nicolas Aubert (right) paramotes over the Pyramids of Giza giving a unique birds eye view of the beautiful structures 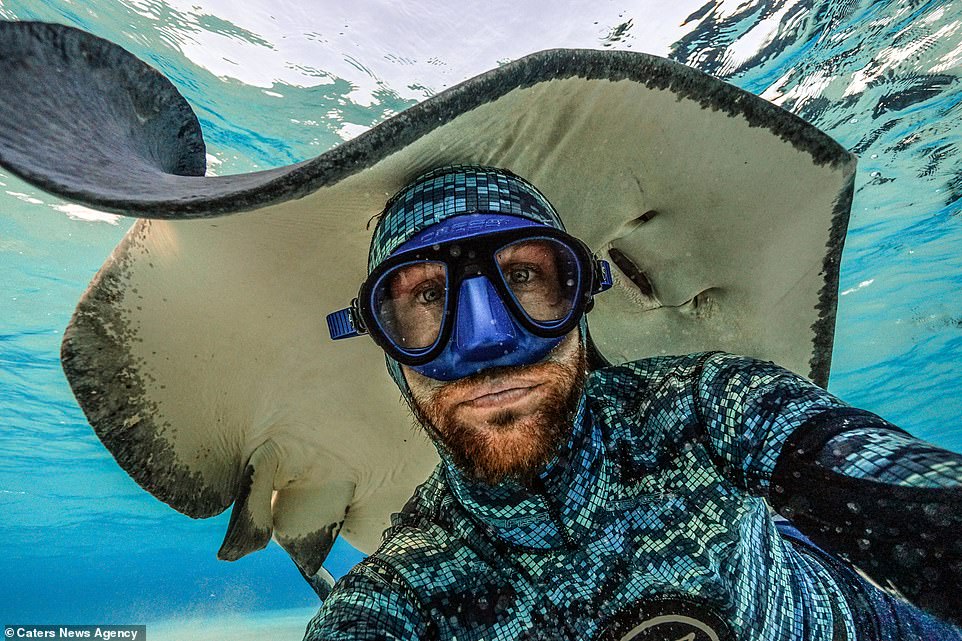 A photographer snapped the selfie of a lifetime with a huge Southern Stingray in Grand Cayman, the Caribbean 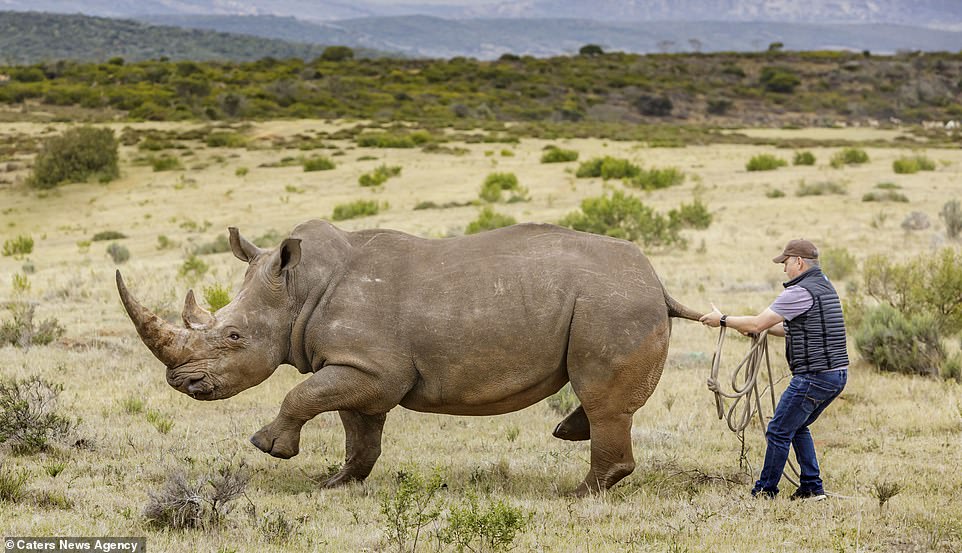 This amusing photos show the moment a conservationist managed to subdue an injured rhino in the Eastern Cape of South Africa, by holding on to its tail. The rhino had been tracked down by a conservation team using a helicopter after which it was hit by a tranquilliser dart 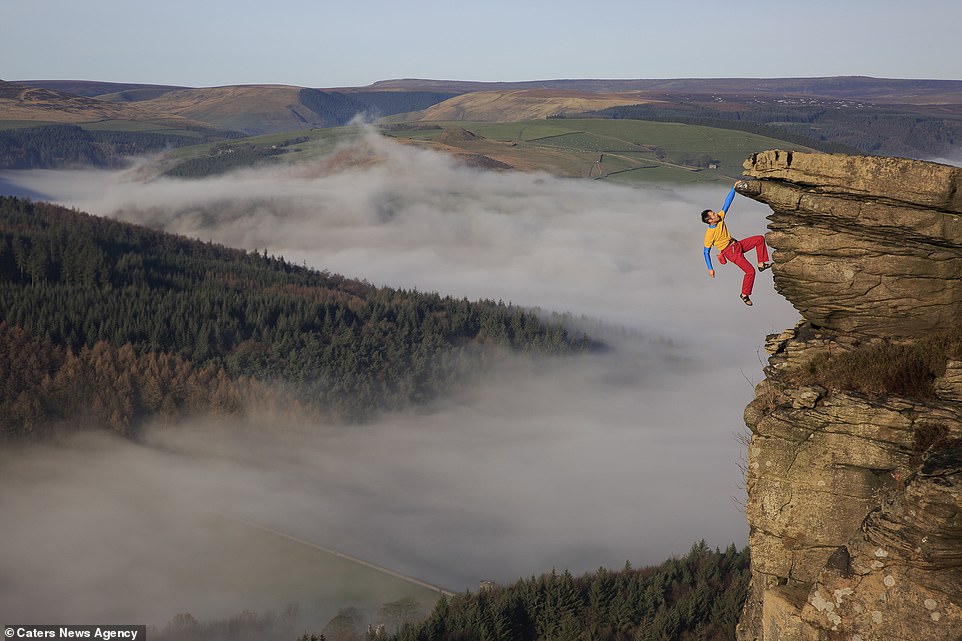 This ultimate cliff hanger shows Mike Hutton, 47, dangling from the famous rock called Gargoyle Flake in the Peak District, 400m above ground. He was able to capture his brave climb by balancing the camera and tripod on the edge of the mountain – something which captured the images automatically 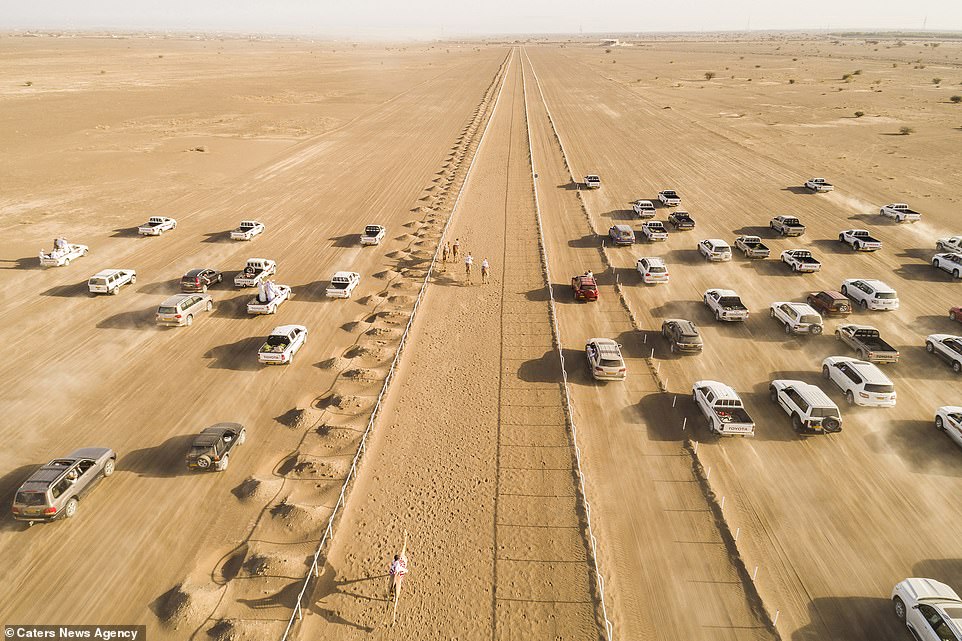 This stunning aerial view captures the historic spectacle of a camel race on a desert racetrack in Al Batinah South, Oman, along with dozens of four-by-four vehicles which can be seen speeding alongside the camels

flying, from, lif, Real, squirrels
You may also like: