The world’s last tribes: Moving images show the indigenous people at risk of extinction around the globe

These breath-taking portraits show some of the world’s last indigenous tribes.

Photographer Jimmy Nelson sends a warning of the risk with his project, ‘Blink and they’re gone,’ of losing global cultural heritage by squandering the cultural identities of the last indigenous peoples.

He travelled throughout the world to photograph the Nenet and Dolgan reindeer-herding tribes of Siberia; the eagle-wielding Kazakhs of Mongolia and the colourful, isolated jungle tribes of Papua New Guinea.

He recorded nomadic tribes in Africa, like the well known Masaai, as well as lesser known ancient tribes in the Sahel desert; and religious based peoples like the Sandhu men of India and the famed Buddhist Tibetans.

All have majestic natural surroundings in common, yet all are sadly threatened by the ever-encroaching tide of modernity. 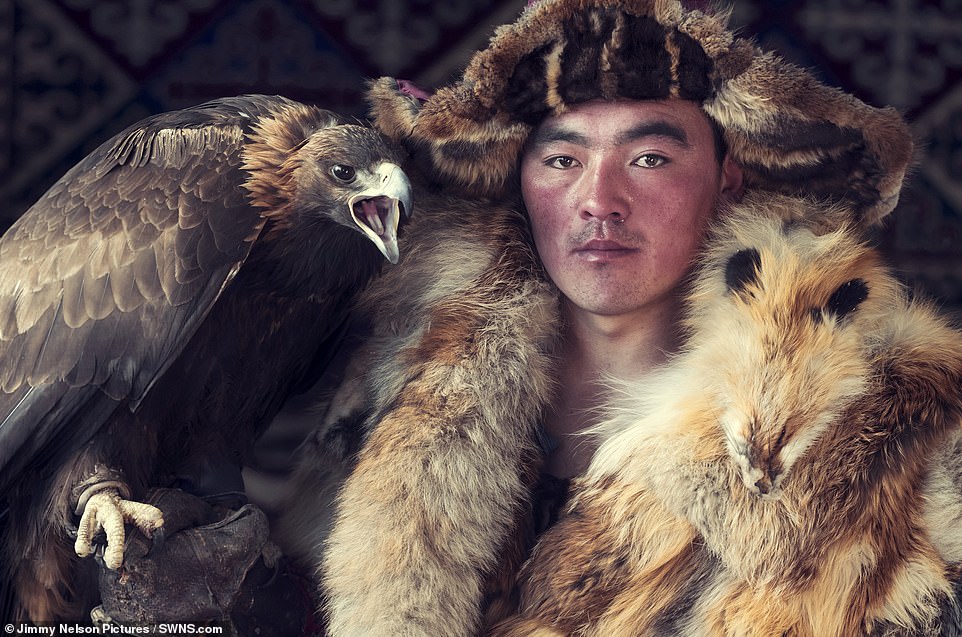 A chief of the Kazakh tribe in Mongolia holding his eagle as he is wrapped from head-to-toe in animal furs; the Kazakhs use eagles to hunt, tracking the birds of prey on horseback. The Kazakhs are Turkic peoples with populations from Turkey to China, and of course in Kazakhstan. The Kazakhs of Mongolia were forced to move there as Russian expansion pushed them from their homeland. 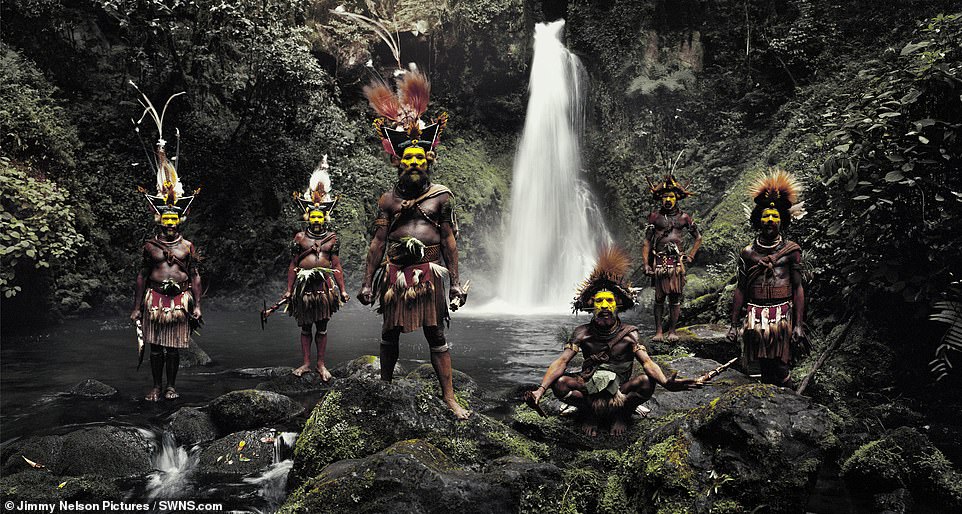 The Huli tribe in Papua New Guinea stand at the bottom of a waterfall; there are roughly 65,000 Hulis and they live in the Tari Basin, which was largely untouched until the middle of the 19th century. They have lived in the region for thousands of years and remember lengthy oral traditions which date back to their origins 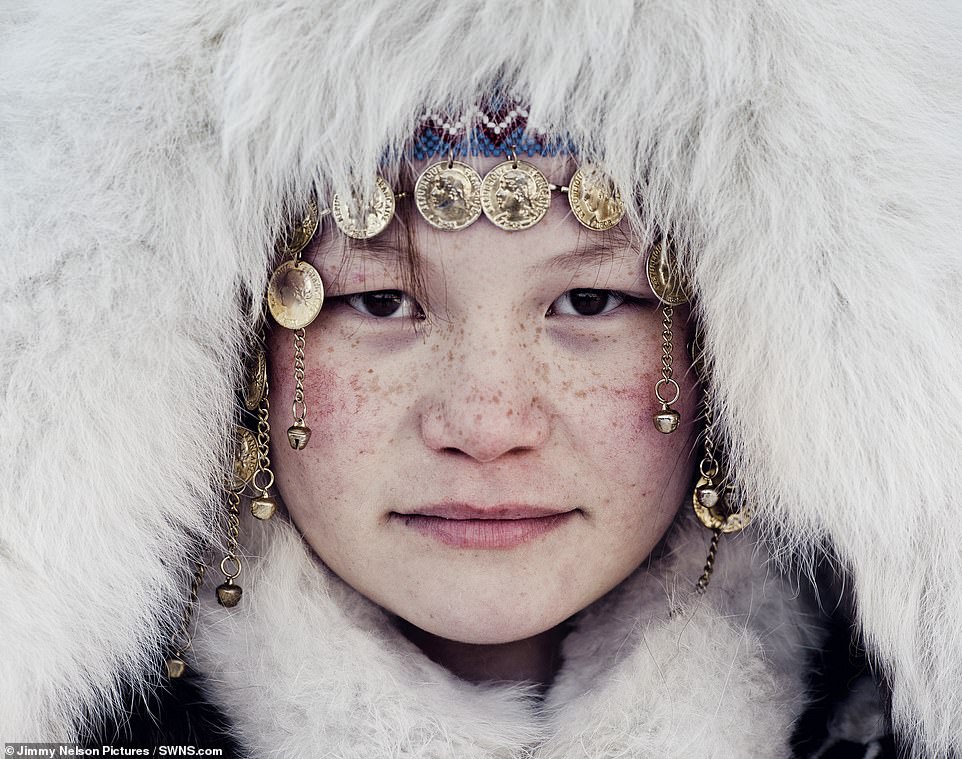 A girl from the Nenets tribe of Siberia; they speak either the tundra or forest languages which are completely different to each other. They are hunters and reindeer herders, using the reindeer as draft animals for shifting heavy loads. After the Russian Revolution they were targeted by the communist regime who sought to put an end to their nomadic way of life. 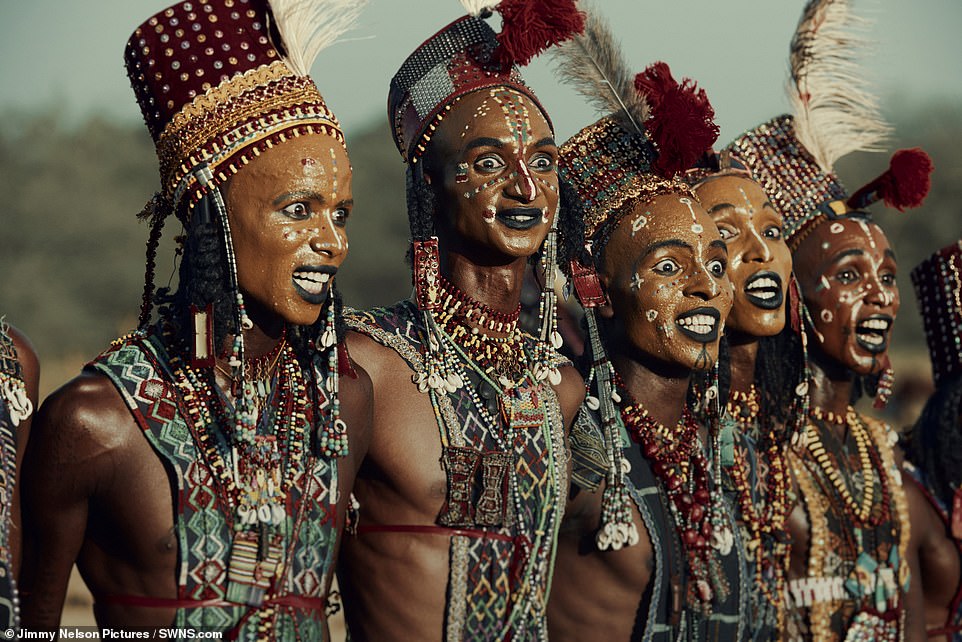 Wodaabe tribesmen take part in a ceremony in Chad; they live as nomadic cattle herders in the Sahel and their religion is based on Islam, having been one of the first tribes to take it up as it spread across the continent. Parents cannot speak to their two first born children, who will be brought up by their grandchildren instead. And during daylight, husband and wife must not be seen to interact or even exchange words. 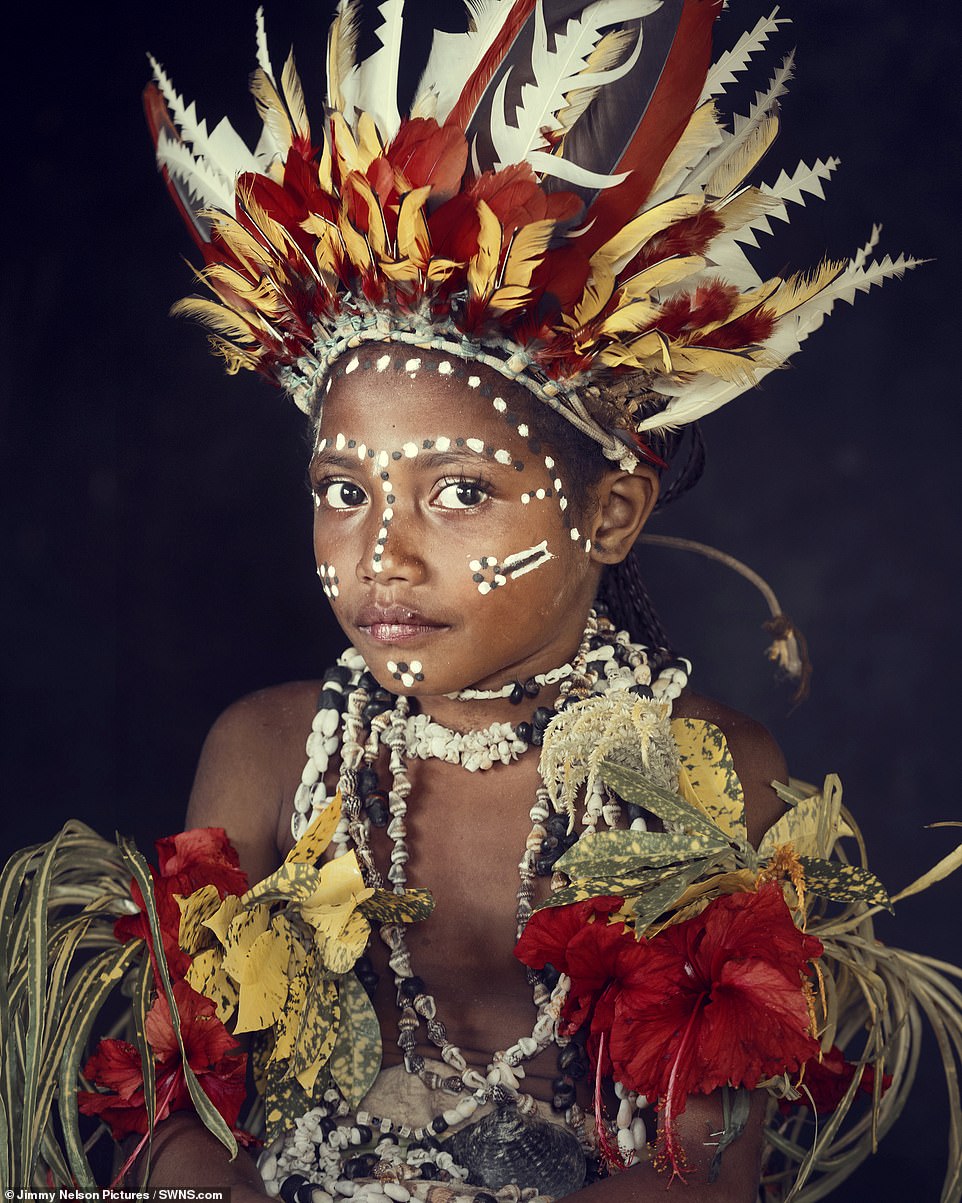 A young member of the Tufi tribe in New Guinea is adorned with the traditional dress of her people; they live in the fjords of the Oro province. Nowadays many members of the tribe live more Western lives and in an effort to keep their traditions alive, the usual tattoos that women get on their faces have been rewarded by granting women who get the tattoos the right to choose their own husbands

The Tufi tribe in New Guinea live in a province which is divided by many river valleys, which the locals call fjords; they are known for their facial tattoos. They have lived in the water-filled region for many years and have long traditions of crafting and paddling with boats. 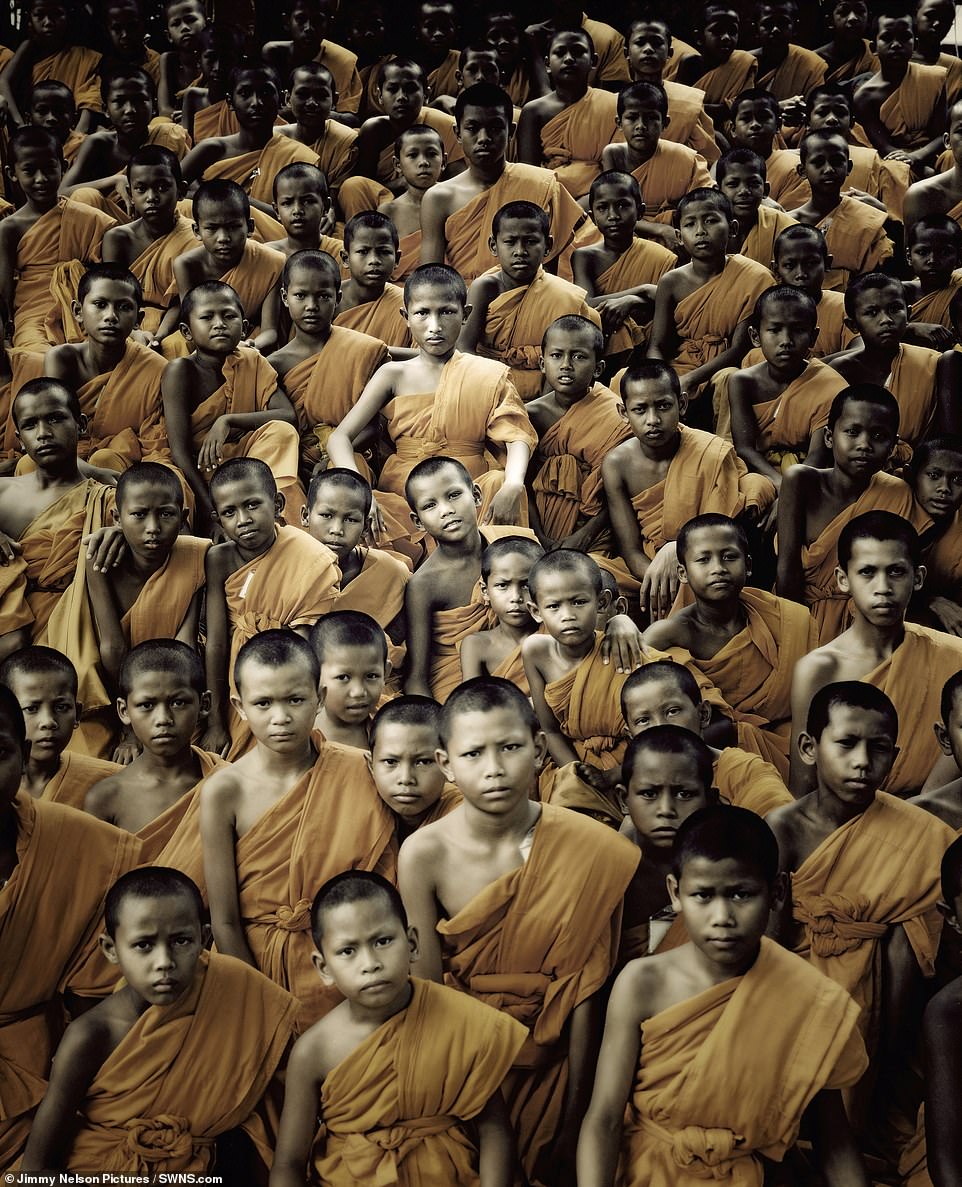 A group of young Tibetans; their culture has been threatened in recent years by the Chinese who crackdown harshly on separatist movements. Tibetan Buddhism is the main religion in the region, originally spreading through India to the Himalayas. 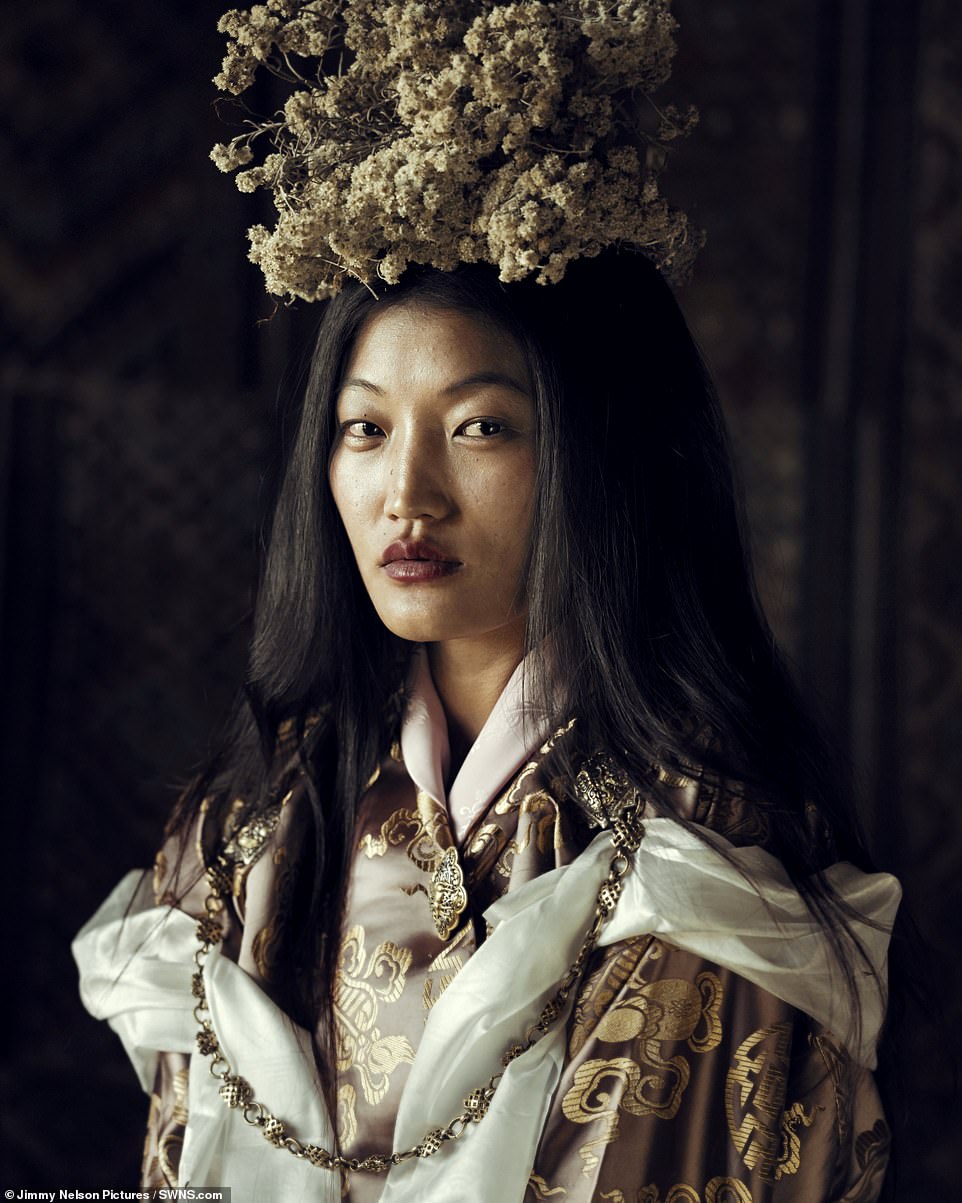 A woman from the Scarchop tribe sits in traditional dress in Bhutan; there are scattered ethnic and indigenous groups throughout Bhutan, which is landlocked between India and China. The culture and language of Bhutanese tribes is related to those of the people from Assam and West Bengal; some are descendants of slaves imported from India, while others are indigenous 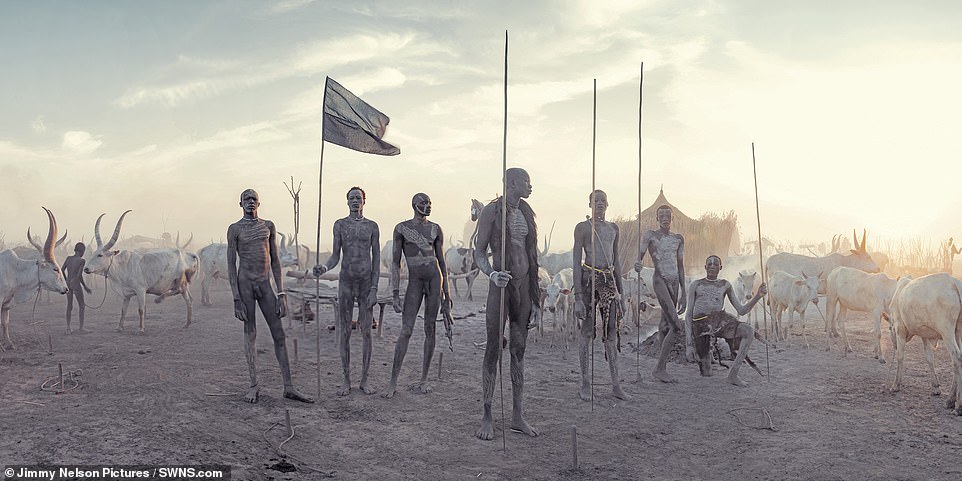 Men of the Mundari tribe with their cattle in South Sudan; cattle is the centre of their culture and a man will provide a cow to his prospective wife’s father. They can have as many wives as they have cows to provide to fathers. The tribe fights an ongoing cattle war during the dry season with a rival tribe. The men – like many other tribes in the region – practice ritual scarring, and young men are initiated with two sets of three parallel lines scarring either side of their forehead 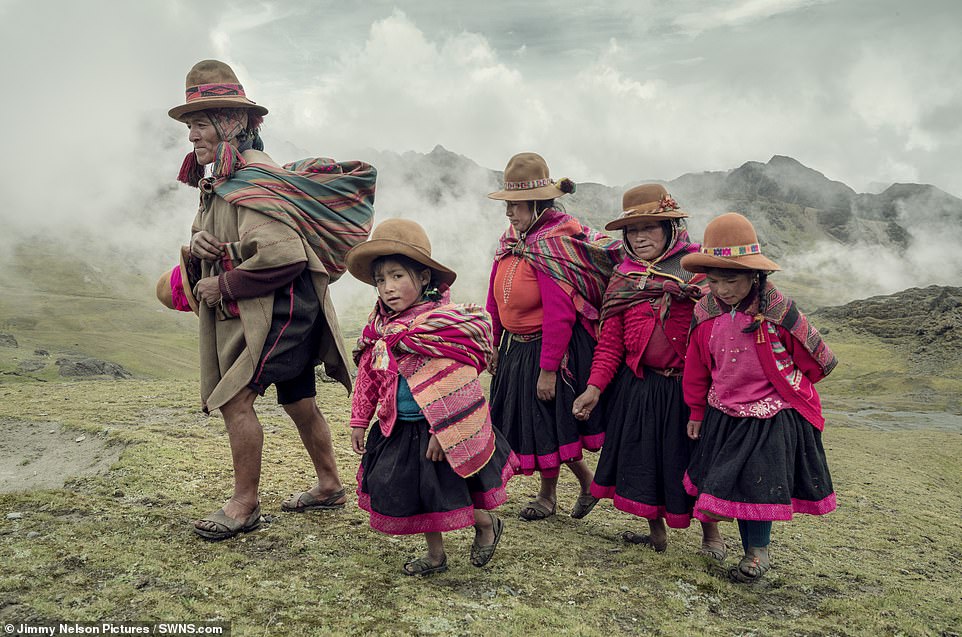 The Q’ero tribe in Peru; the people live in the remote Peruvian Andes and do not follow a strict religion but are broadly spiritual, with some aspects of Catholicism spread by the Spanish being incorporated. They worship the ‘Cosmic Mother’, which is equatable to our idea of mother nature. The people believe in prophesies and predict great cultural changes, one of those historical prophesies they believe was fulfilled by Jesus Christ 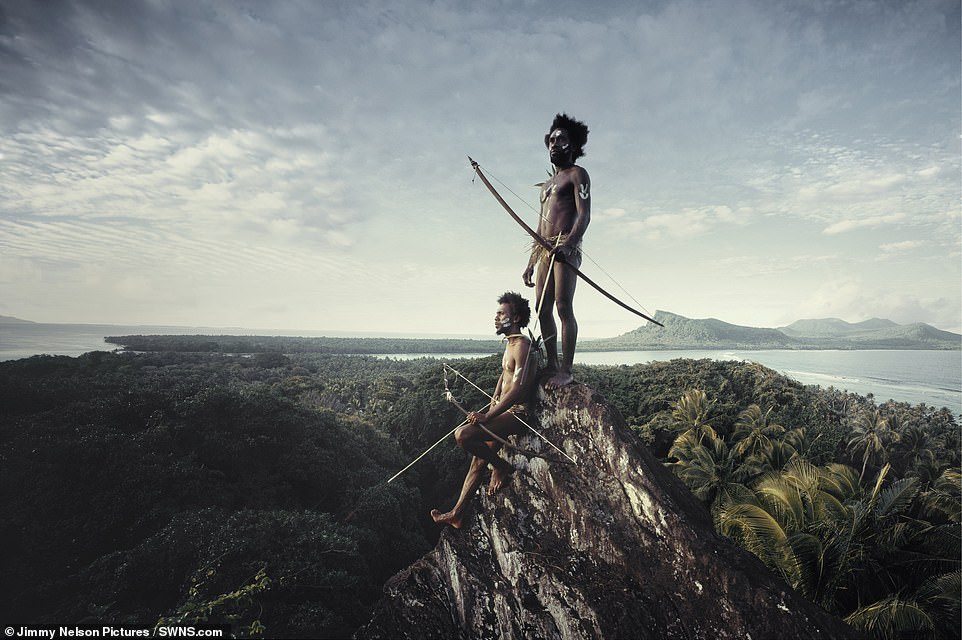 The Ni tribe archers stand on a mountain top in Vanuatu, an island in the Pacific. Many of the indigenous tribes believe that Westerners bring divine wealth. One such cult is the John Frum cult and the followers believe, due to the coming of military equipment in the Second World War, in a figure called John Frum, who is often depicted as an American soldier. A tribesman once said to Sir David Attenborough, ”E look like you’ 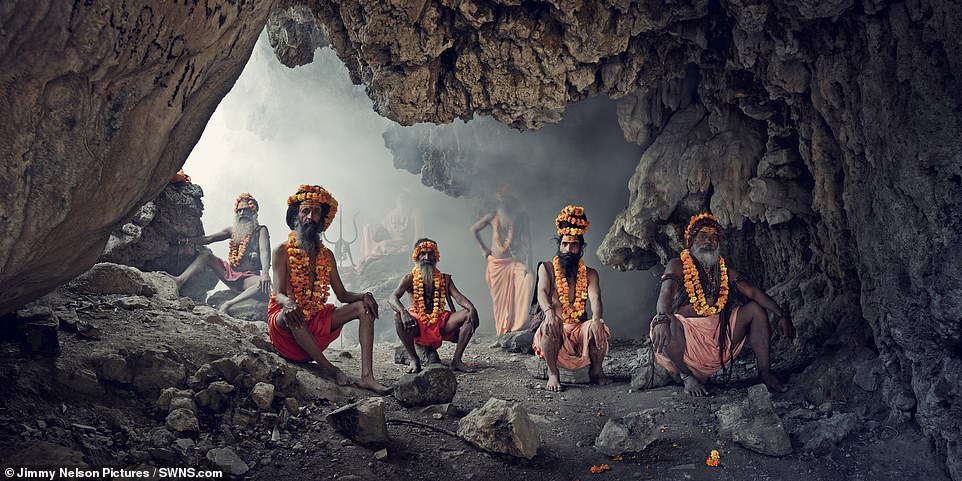 The Sadhu tribesmen of India; they are ascetic monks who have renounced worldly pleasure and practice the path to a higher spiritual discipline which they believe will free their souls. 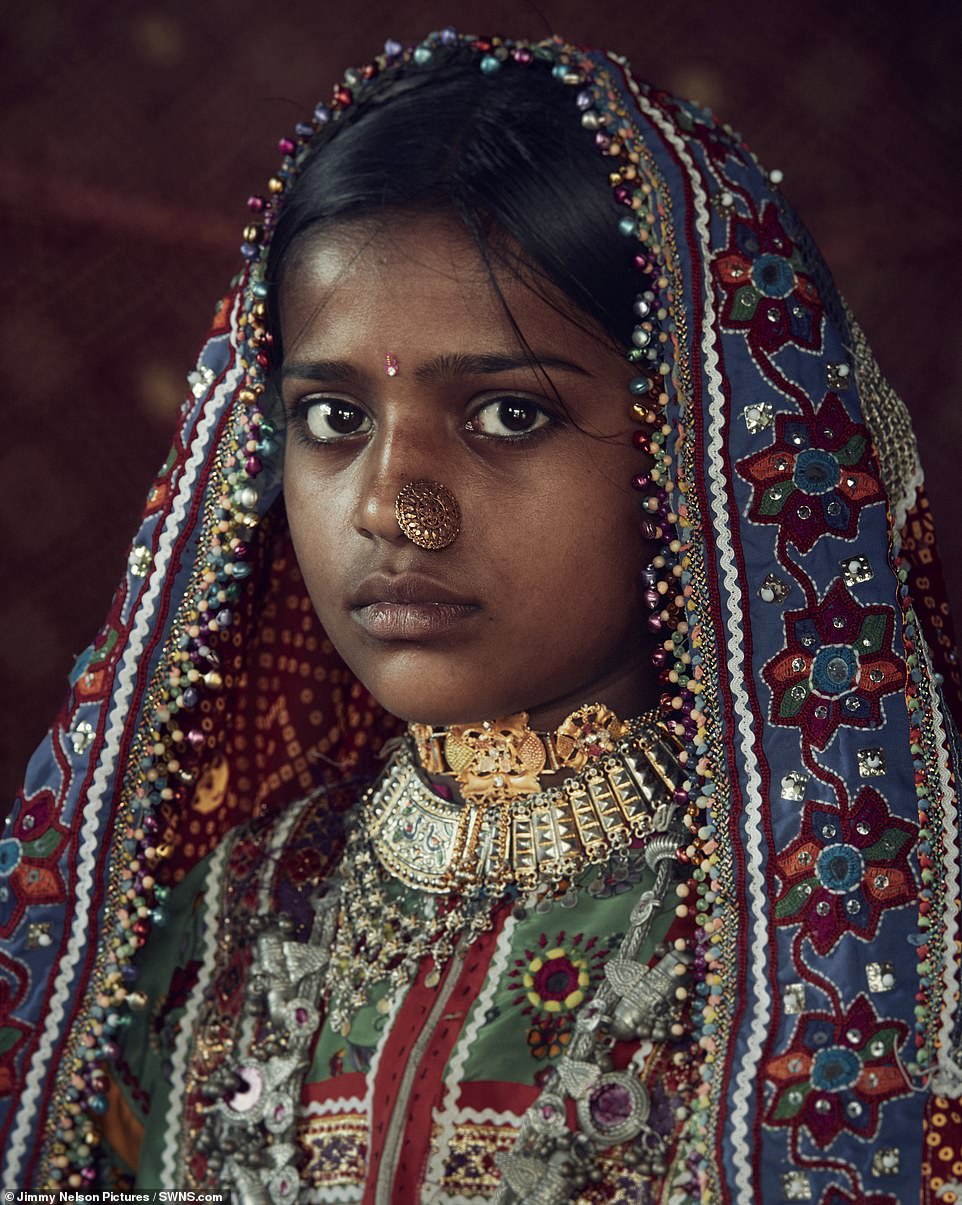 A member of the Mir tribe in India; they live in the northern Indian state of Jammu and Kashmir and believe they are descended from noble Persian bloodlines, often prefixing their names with Mir 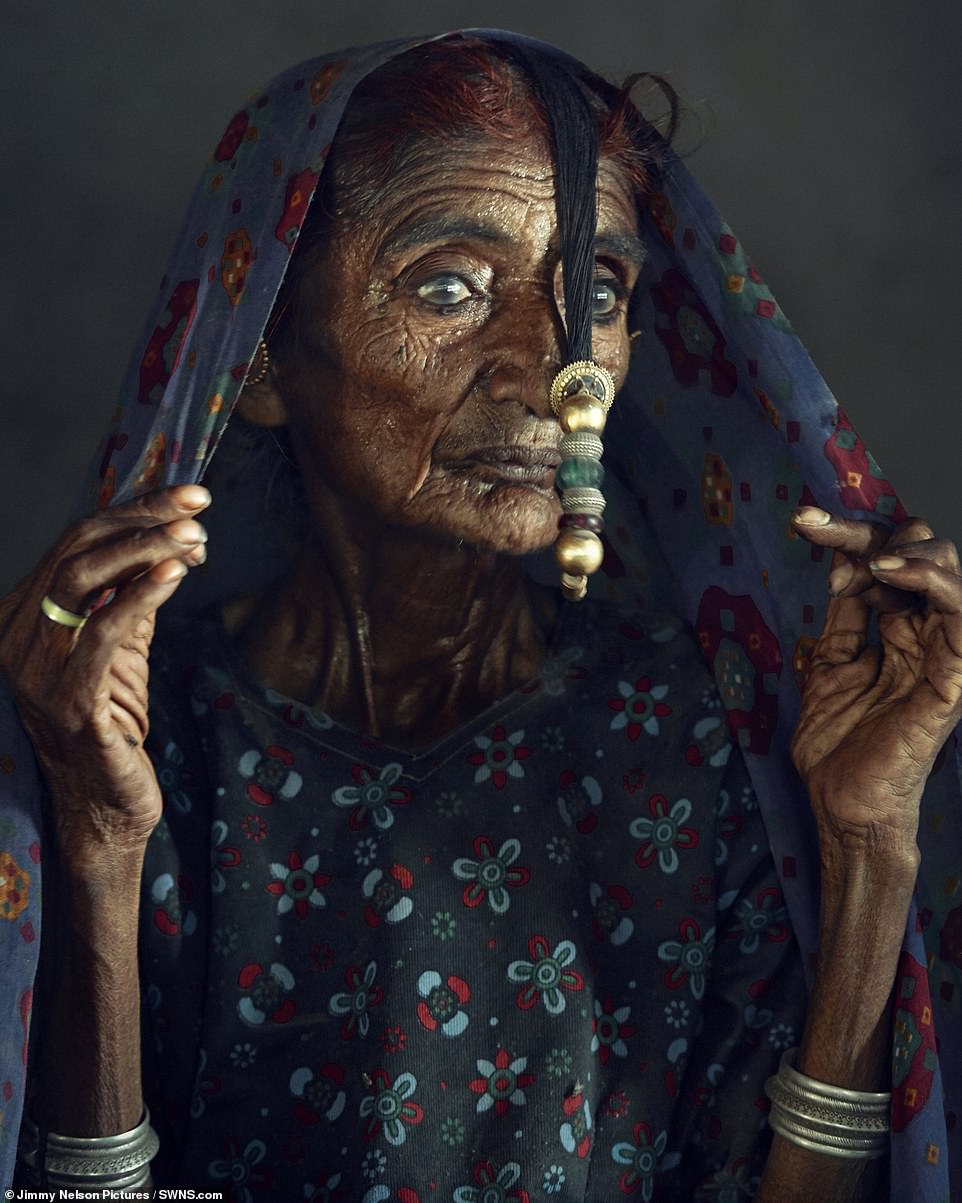 A elder female member of the Mir tribe, an ancient family of the Kashmiri valley who believe their roots stretch back to Persia 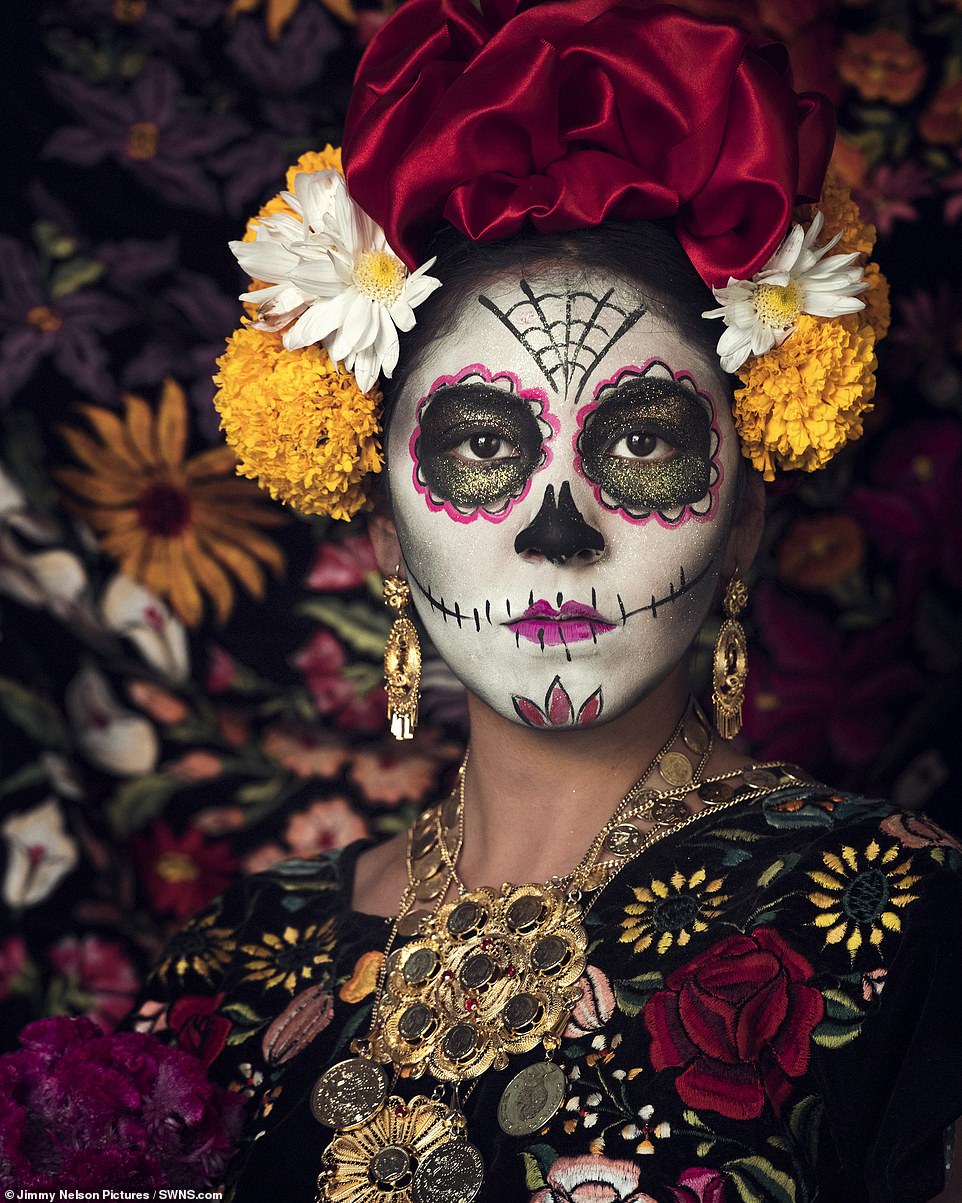 A tribe member in Mexico whose face is painted for the day of the dead, or as it is known locally, día de los muertos. The tradition can be traced  back to cultures before the Spanish conquest who believed in celebrating their ancestors in a visceral way. People build altars to deceased relatives and spend time at those sites, adorning them with trinkets and remembrances of their loved ones. 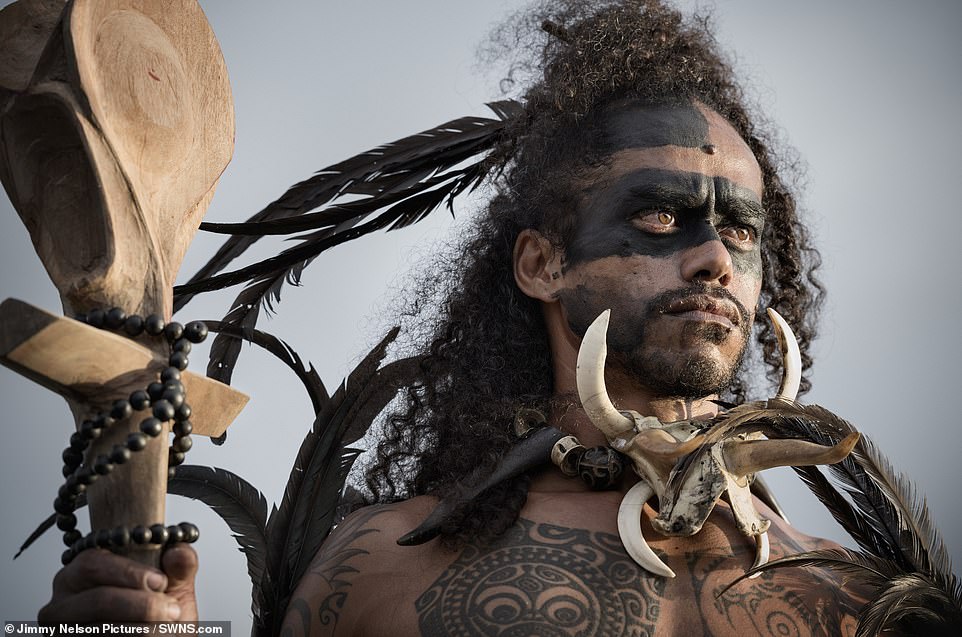 A member of the Marquesas tribe of French Polynesia stands with his face painted black, with tattoos covering his chest and holding an ornate hand carved wooden staff. The islands were colonised by people believed to have been seafaring Polynesians from Samoa. The dense populations meant vicious wars were fought between the tribes which included cannibalism. 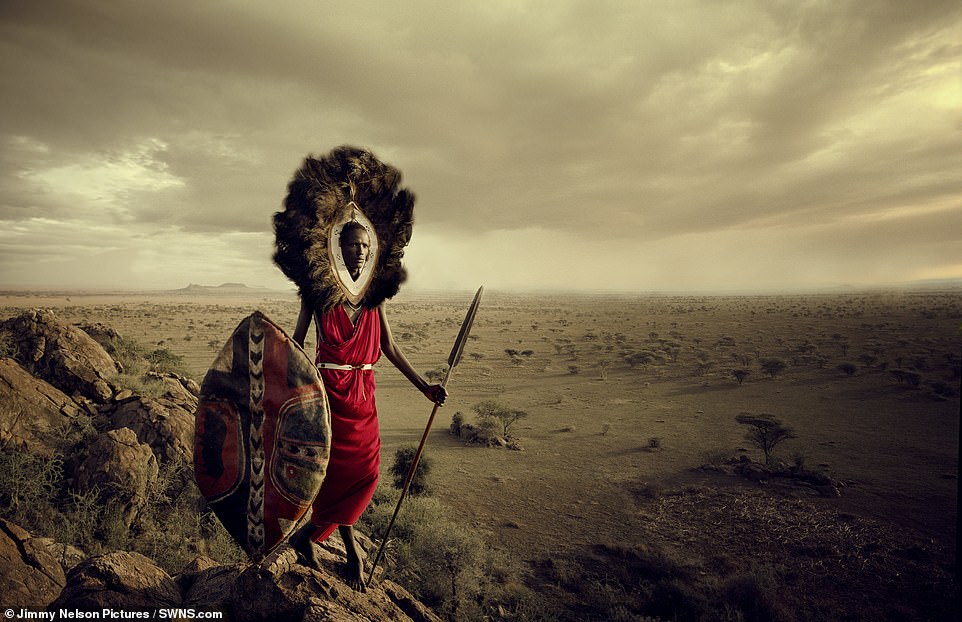 A member of the Maasai tribe in Tanzania surveys the desert landscape while carrying a large hide shield and spear, with a red tunic and fur head-dress. The group come from Kenya and Tanzania and live semi-nomadic lifestyles. The people are famous and known for their cattle-herding as well as their formidable warriors. 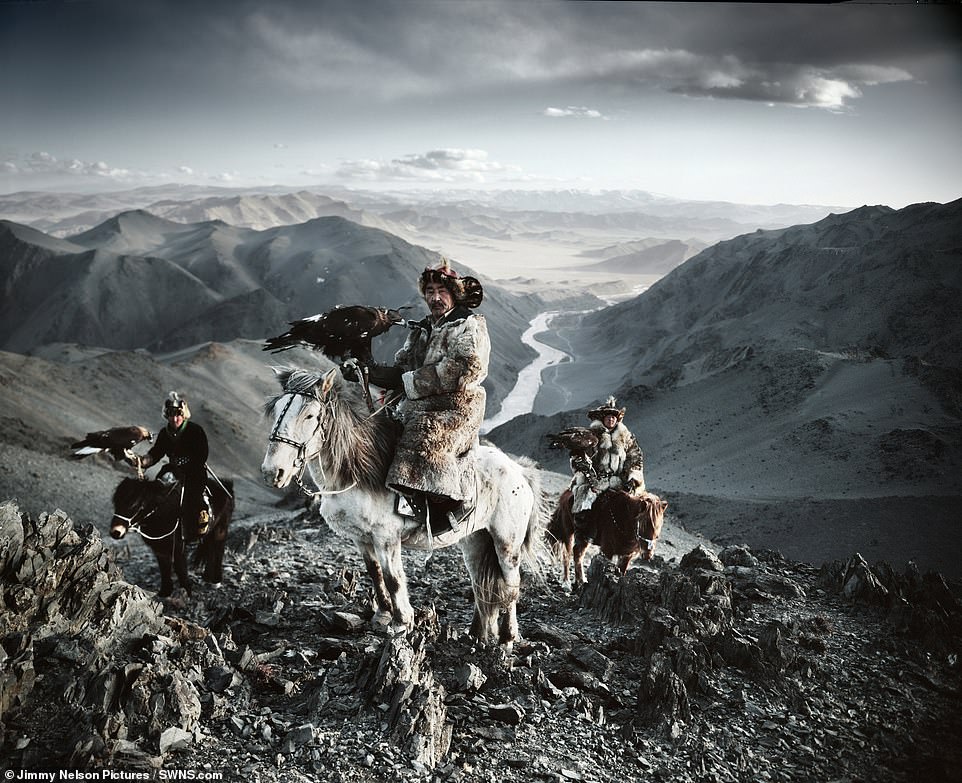 Members of the Kazakh tribe stand in the Mongolian wilderness holding their signature eagles on their horses. They learn to ride at very young ages and use the birds of prey for hunting and scouting. 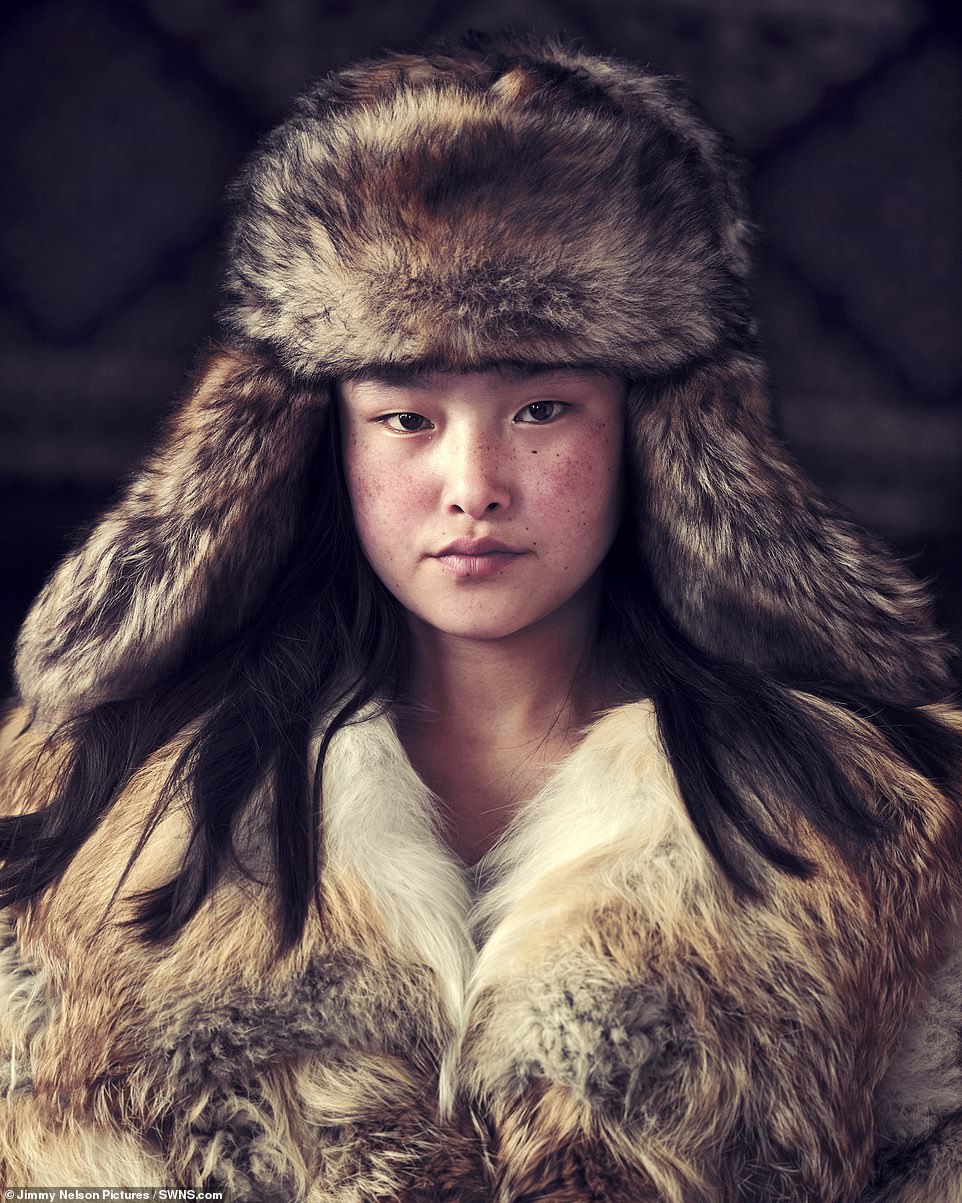 A female member of the Kazakh tribe wearing thick furs, they live in harsh conditions and thick coats are needed to guard against the cold 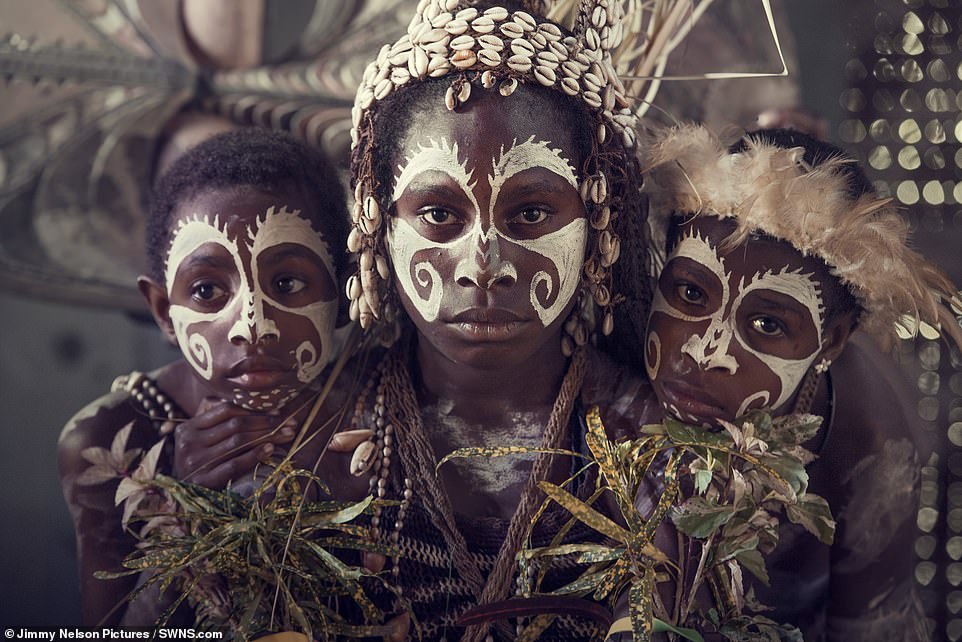 Young members of the Iatmul tribe of Papua New Guinea; the women catch fish, while the men of the tribe fashion dug out canoes which they use to journey the surrounding rivers and trade with other tribes. The area is one of the best insulated from the outside interference of modern mankind and they are totally self-reliant. 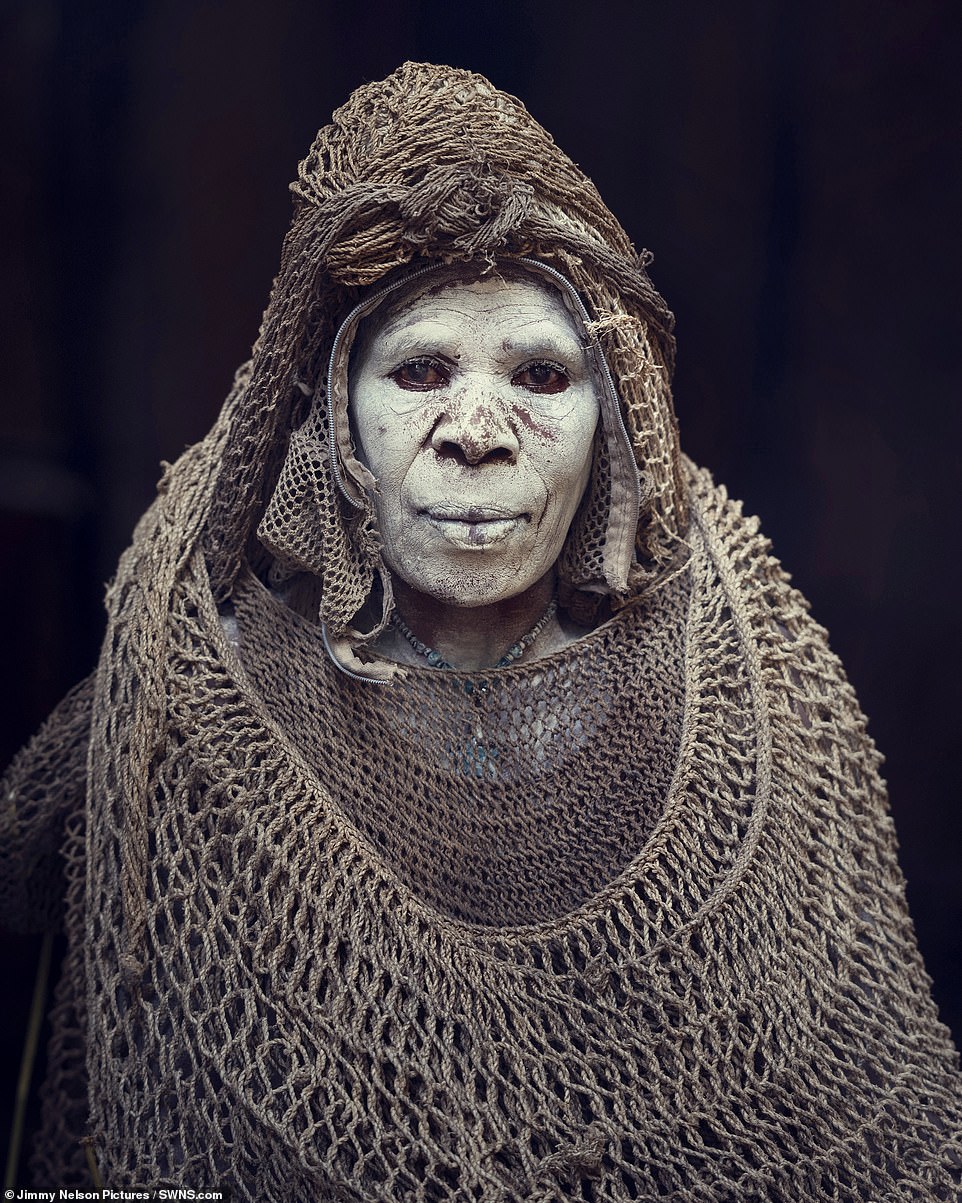 A female member of the Huli tribe who wears a thick net of fabric and her face is painted white; the people fight over territory and pigs and are known to take great effort with their costumes to terrify the enemy 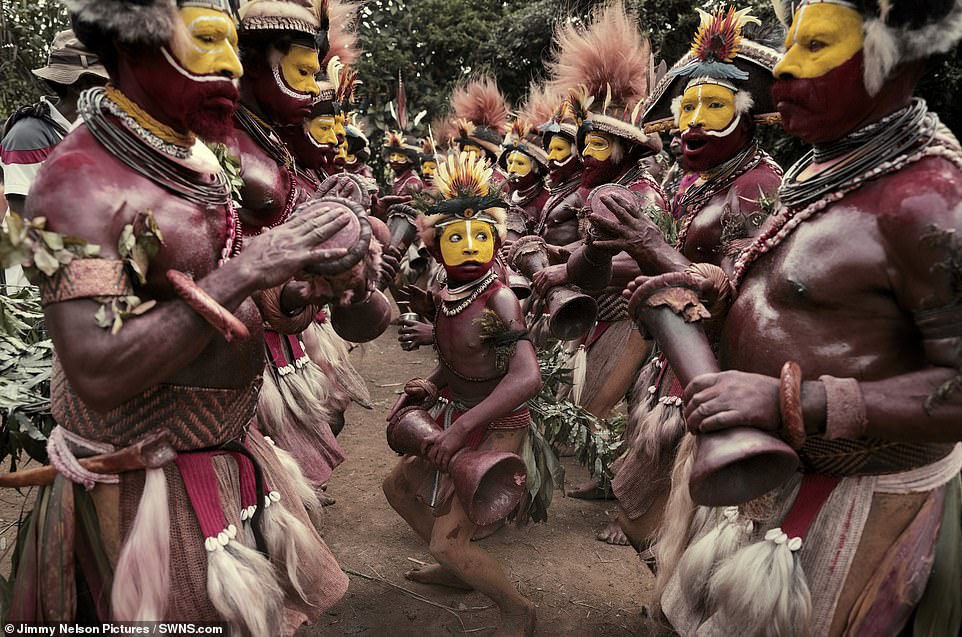 The Huli tribesmen of Papua New Guinea taking part in a ceremonial dance while a young boy beats on a drum in the centre; the tribe take great care to make an impression on their enemy with their face paints, head wear and clothes 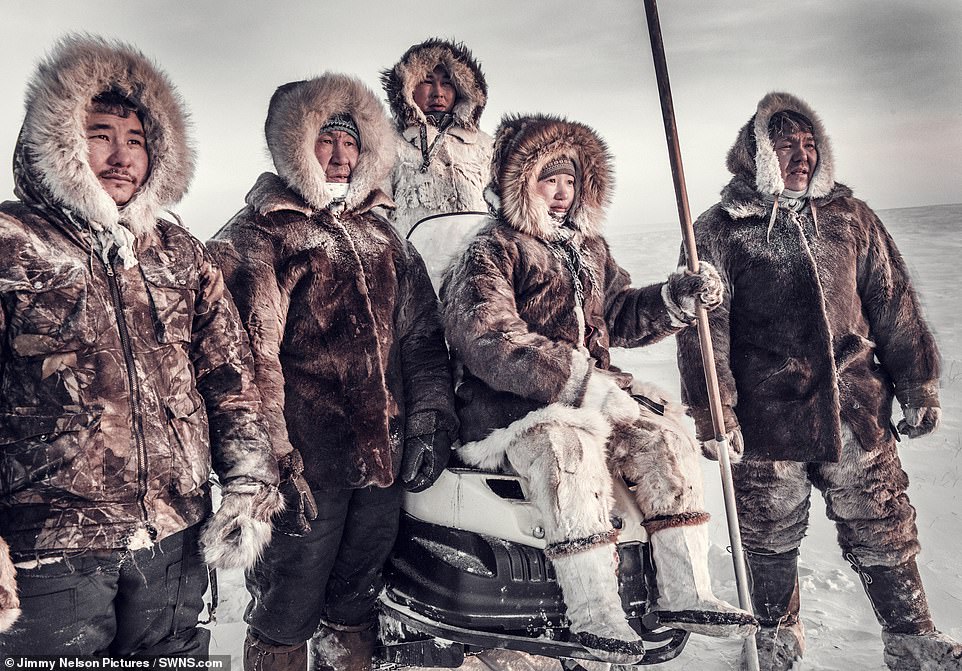 The Dolgan people of Siberia stand in the arctic tundra. A young boy holds a spear as he sits on the front of a skidoo. They use reindeer packs to pull their loads and despite their ancient traditions, hunt with modern rifles 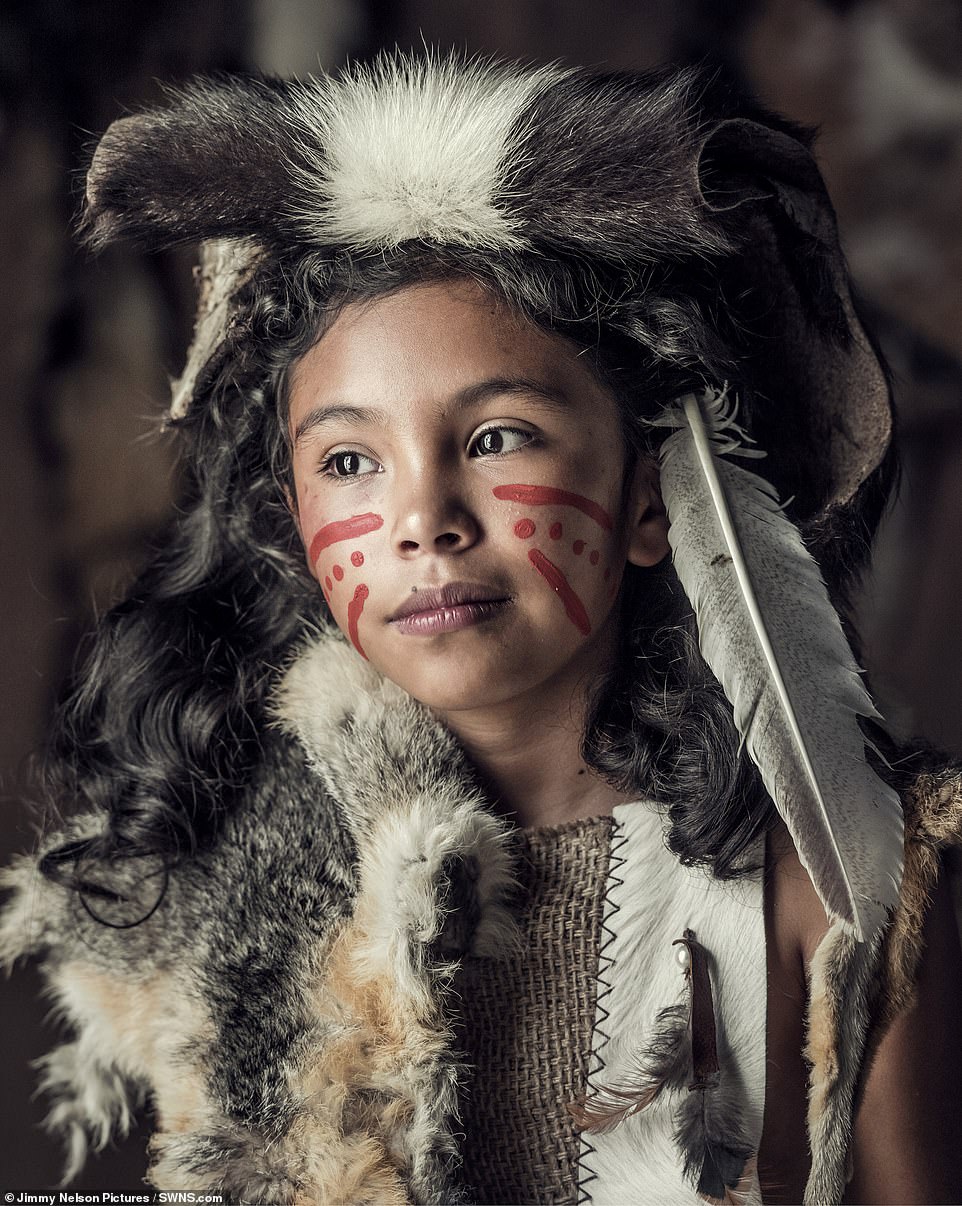 A member of the Chichimeca tribe of Mexico, the nomadic peoples have led difficult lives since the Spanish invasion and clashed heavily with the colonisers when they first arrived. They were simple hunter gatherers but were forced out of their lands after the Spanish discovered valuable silver mines