Sammy Davis Jr. hugged former President Richard Nixon at a campaign rally because he was going to ‘alleviate’ the burden of the singer’s tax bill.

Clarke Peters, who played Lester Freamon in HBO’s The Wire, has been delving into the musician’s past for an upcoming musical he’s directing about Davis called ‘Sammy’ at the Lyric Hammersmith Theatre in London.

In the middle of a Youth Rally performance in Miami, shortly after Nixon was reelected as the Republican’s presidential candidate in 1972, Davis introduces the president and hugs him from behind.

‘From what I hear, and I’m still trying to get to the bottom of it, he owed a lot of money in back taxes that Nixon was supposed to have found a way to alleviate. I would hug him too, you know what I am saying?,’ Peters told the Times. 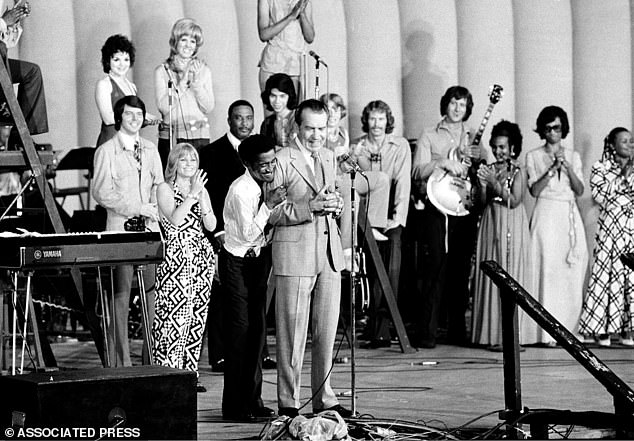 Entertainer Sammy Davis Jr., grabs US President Richard Nixon from behind and squeezes his arms at a youth rally at the Republican National Convention in Miami Beach, Fla. in August 1972 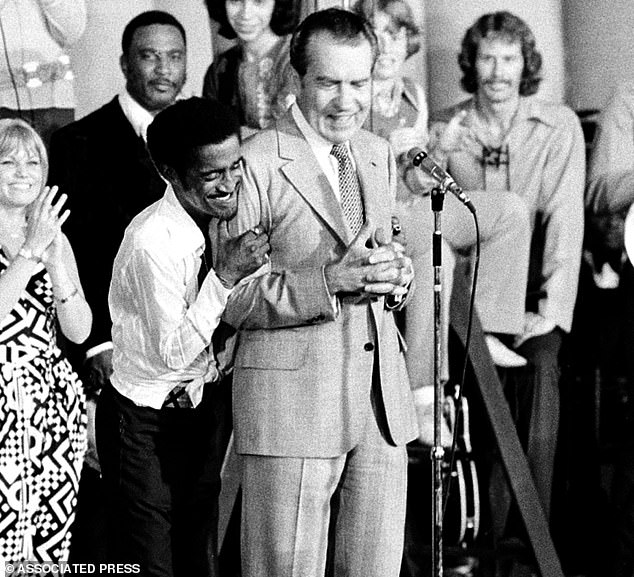 Sammy Davis can be seen hugging US President Richard Nixon at a campaign rally in 1972, in a move that irked black America 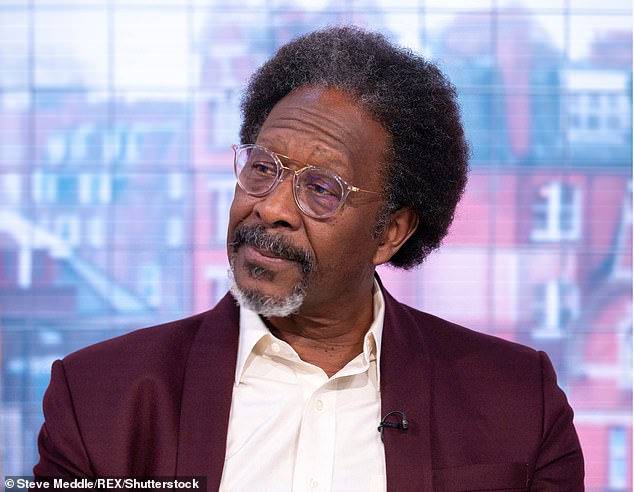 Clarke Peters, who starred as Lester Freamon in HBO’s The Wire, is pictured at the ‘Sunday Brunch’ TV show in London in November 2019. Peters is researching Davis’ life as the director of ‘Sammy’ at the Lyric Hammersmith Theatre in London. 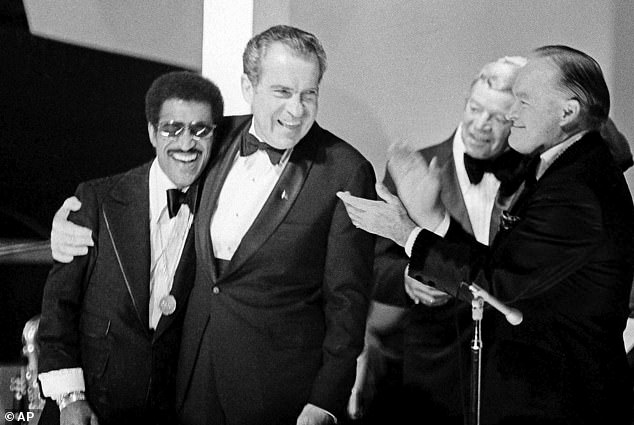 In this May 1973, file photo, President Richard Nixon embraces Sammy Davis Jr. during festivities at the White House where about 450 former prisoners of war and their guests attended the affair in Washington

Peters added he was hoping to use the play to put Davis’ actions in context and to allow the audience to ‘draw their own conclusions’.

Davis was a controversial personality who irked black America when he converted to Judaism and for having relationships mainly with white women.

His support of Nixon during in the 1970s enraged people who saw the Republican as having rolled back the tide of progress implemented by his predecessor Lyndon B. Johnson.

According to the Martin Luther King Jr. Institute at Stanford University: ‘Nixon reversed some of the social and economic welfare policies of predecessor Lyndon B. Johnson, vetoing new health, education, and welfare legislation.

‘Seeking southern support for the Republican Party, Nixon supported anti-busing legislation and favored “law and order” policies that were widely seen as directed against black militancy.’ 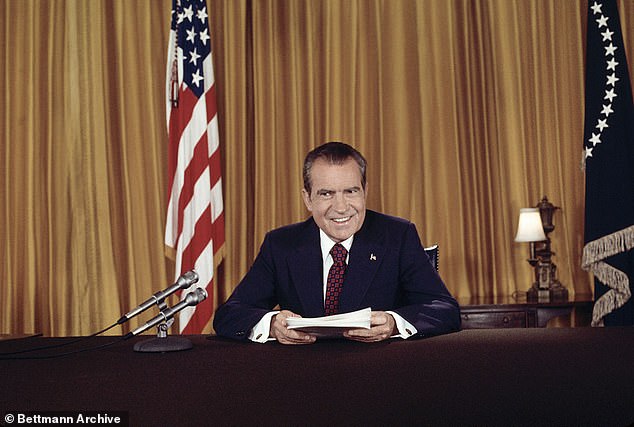 An undated file photo shows President Nixon, in a nationally televised address, asking for support against ‘those who would exploit Watergate in order to keep us from doing what we were elected to do.’ Nixon was not popular among black Americans as he was believed to have rolled back many of the welfare policies of his predecessor Lyndon B. Johnson 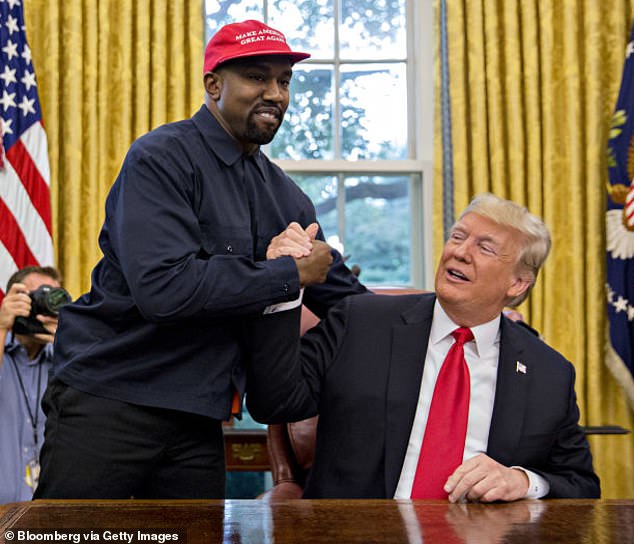 Rapper Kanye West, left, shakes hands with U.S. President Donald Trump during a meeting in the Oval Office of the White House in Washington, D.C., U.S., on Thursday, 11 October, 2018

‘We’re going to (place) more of these little N**ro b****rds on the welfare rolls at $2,400 a family,’ Nixon once said about what he saw as lax work requirements.

Peters said he is trying to ‘redeem’ Davis from being cast out as an ‘Uncle Tom’ or ‘just a black Jew’, for his relationship with the president.

Peters, the acclaimed actor and director, who starred as Albert ‘Big Chief’ Lambreaux in Treme, compared Davis and Nixon to the current presidential love-affair between Donald Trump and rapper Kanye West. 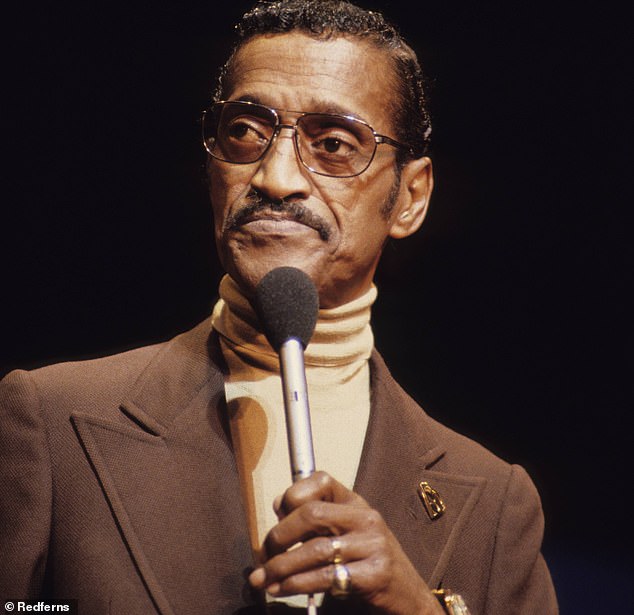 American entertainer Sammy Davis Jr. performs live on stage at the Palladium in London circa 1980

West will always remain a ‘pariah’ until we know what’s going on his head, Peters said.

‘Kind of the way Sammy was when he hugged Nixon. When we find out more about him you say: “Oh, maybe that’s why he did it,”‘ he added.

Davis and Nixon first crossed paths when the former was invited to the White House on July 1, 1971, to accept a role on the National Advisory Council on Economic Opportunity. 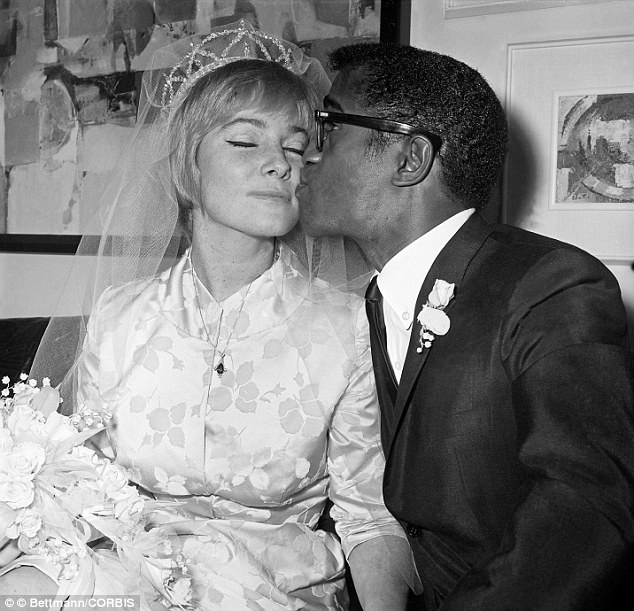 Reception following wedding of May Britt and Sammy Davis, Jr. on November 13, 1960. Davis was already a controversial figure in the black community for converting to Judaism and for marrying a white woman

Nixon later sent the singer to Vietnam to perform for US troops and invited him to a White House reception in 1973.

According to timeline, Davis saw the relationship with Nixon as an opportunity to advocate for issues faced by black Americans.

‘When my wife, Altovise, and I were invited to the White House after the November elections, I repeated [my recommendations],’ he told Ebony.

According to a book written by Sammy’s daughter Tracey Davis in 2016, his greatest humiliation was at the hands of President John Kennedy – who refused to let him perform at his inauguration because Sammy had married a white woman, Swedish actress May Britt.

Davis, Jr&apos, mystery, of, Sammy
You may also like:

Today’s coronavirus update: US on track with Italy, bracing for the worst

Police can use force on children suspected of flouting lockdown rules