Skopje: North Macedonia's President Stevo Pendarovski on Friday signed a final accession document required for the country to become the next member of NATO. 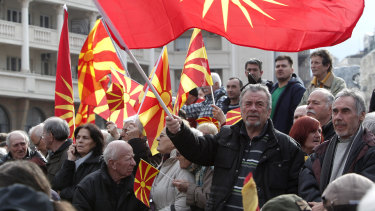 People wave the old and present national flag in a protest against the change of the country’s constitutional name, in downtown Skopje, in November 2018.Credit:AP

The country's bid to join NATO had been held up over a long-standing dispute with neighbour Greece, when it agreed to change its name from Macedonia to North Macedonia.