Deadly floods have inundated almost 8000 homes in Shepparton and neighbouring Mooroopna as roads are shut and the remaining residents of towns on the floodplain of the Goulburn River, water lapping at doors, are warned it is too late to leave.

As Victoria’s emergency services minister Jaclyn Symes called for more Australian Defence Force troops on the ground, Prime Minister Anthony Albanese travelled to Bendigo in the centre of the state, where residents of flood-ravaged areas are seeking refuge. 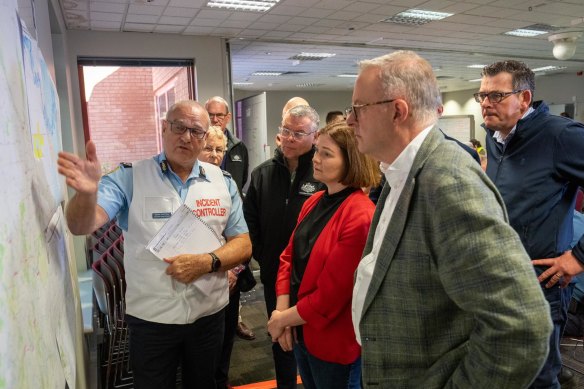 The PM visits the Epsom Incident Control Centre in Bendigo.

“Federal funds have already started to be distributed, ADF troops are on the ground, and the government stands ready to provide whatever assistance we can to affected communities,” he said in a Facebook post on Sunday.

Albanese will join Premier Daniel Andrews in providing a floods update in Melbourne at 1.30pm.

The press conference comes after thousands of residents of Shepparton, Orrvale, Mooroopna and Kialla West were told it is too late to leave their homes on Sunday as floodwaters continued to rise. Areas of concern include the Goulburn and Loddon valleys, along with Echuca and its surrounds.

Shepparton MP Suzanna Sheed said she was concerned about the town of Mooroopna, which has been completely cut off from Shepparton by floodwaters, and Mooroopna residents are now unable to access a hospital if they need urgent care. 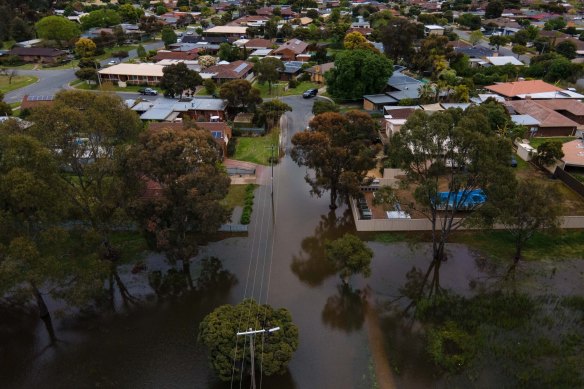 SES chief Tim Wiebusch said the flooded Goulburn River in Shepparton is currently at 11.88 metres and rising. The river level is expected peak near 12.20 metres on Monday morning.

An update from the Greater Shepparton City Council states that over 7950 properties in the municipality have been flooded. More than 400 Victorian roads, many in the state’s north, are now closed.

“On the Goulburn, Broken River and Seven Castles Creek at Shepparton, we’re already seeing inundation around thousands of properties this morning at Shepparton and Mooroopna,” Wiebusch told ABC Radio on Sunday.

“That [water]’s already been in and around Kialla West and Murchison on the way up the Goulburn. So again, we’ve put in place emergency warnings — too late to leave there now.”

He said the SES and other support organisations were preparing for “several weeks of flooding along the Murray River”, which may reach Echuca next week, after the city faces inundation by the Campaspe River.

Wiebusch said the “single biggest killer in flooding in Australia” is people trying to drive through floodwaters.

There has been more than 450 rescues since the flood event began on Wednesday, and 88 rescues in the last 24 hours.

“The situation with floodwater can change rapidly, so don’t necessarily think that you can navigate around those roads that are closed to get through these areas,” Department of Transport spokesman Andrew Crook warned on ABC Radio. “Lots of surrounding roads may also be impacted. ”

Across the state, there are almost 80 emergency warnings or advice notices from VicEmergency.

On Saturday, floodwater claimed the life of 71-year-old Kevin Wills, a respected former panelbeater, who was found drowned in his backyard in Rochester, nearly 200 kilometres north of Melbourne.